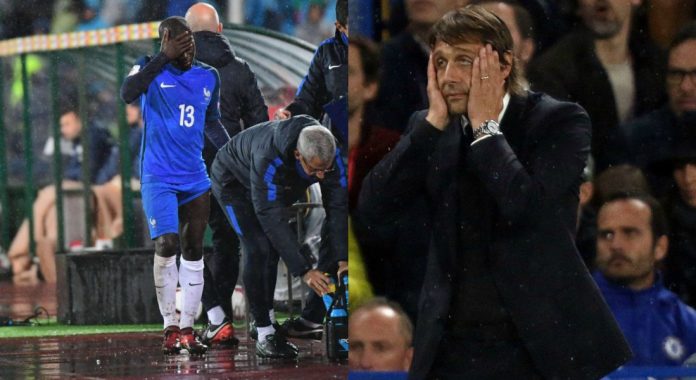 Chelsea have been dealt a huge blow with their midfield wizard N’Golo Kante ruled out of action for the rest of the month due to a hamstring injury.

Kante picked up the hamstring injury during France’s World Cup qualifier clash with Bulgaria last Saturday as he limped off the pitch after just 34 minutes.

The injury was confirmed by France coach Didier Deschamps and a scan showed that the former Leicester City player had suffered a tear in the left thigh.

Kante has now returned to Chelsea’s Cobham training complex but will undergo treatment for the muscle tear which forced him out of international duty.

And the Sun claimed that Antonio should now be worried as Kante, who plays an anchoring role in the Chelsea midfield, has been ruled out for the rest of the month.

Kante will now miss the Premier League clash with Crystal Palace at Selhurst Park this weekend.

It is also believed that the Frenchman will not be available for Chelsea’s Champions League double header against Roma this month.

He could also miss Premier League games against Watford, Bournemouth and Everton.

However, if he recovers quickly, he could return ahead of Chelsea’s high-octane clash with Manchester United on November 5.

Kante has added up to Chelsea’s injury woes – with Alvaro Morata already ruled out of action after suffering a grade two hamstring injury in their 1-0 defeat against Manchester City.