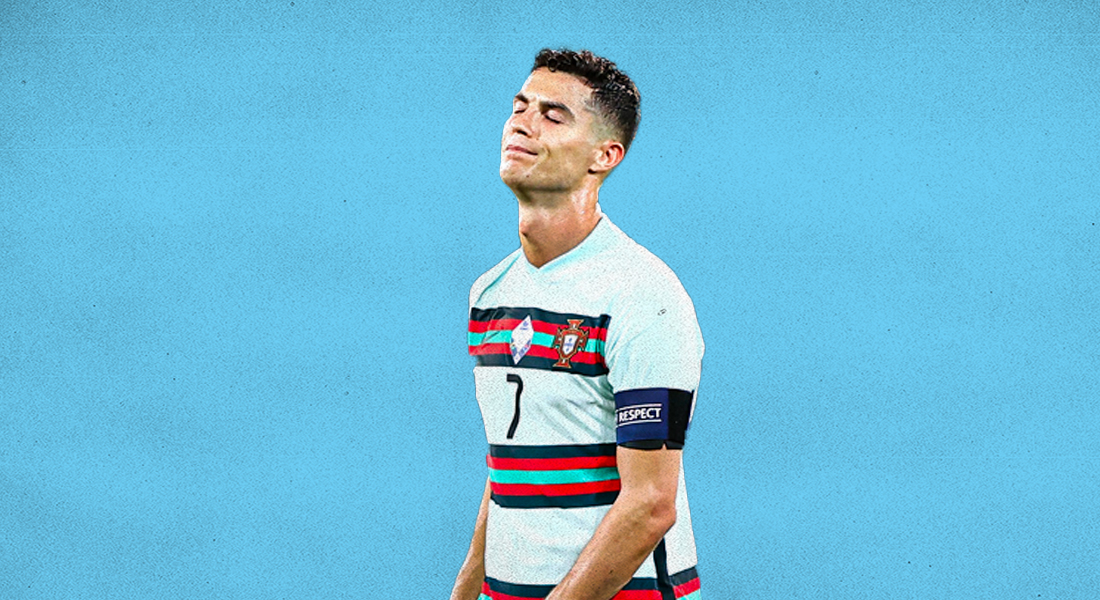 Every story has an ending and some are just more painful than the others. When Ronaldo threw the captain’s armband in anguish after the defeat to Belgium, it wasn’t the most appealing sight for his fans. The agony and distress in that loud roar that could be heard over the 11,000 cheering fans when the full-time whistle blew showed what was on the line.

What it meant for the Portuguese captain and all-time top scorer Cristiano Ronaldo was never in doubt, but his reaction wasn’t only of a heart-break. He looked puzzled, contemplating the fact that this was in all probability his last European Championship appearance for his nation, that maybe this was his last chance to bring glory to his nation.

This disappointment followed an already unsatisfying domestic season with Juventus that saw their 9-year long streak of winning the Scudetto end. It was ended by the same Romelu Lukaku who comforted the disheartened Ronaldo after Portugal’s defeat to Belgium.

Despite winning the golden boot this season with the Old Lady, the 36-year old forward could neither help them retain the Italian champions tag nor could he end their unfortunate streak in the Champions League.

Juventus had won the league every year from 2012 to 2020 and Ronaldo was a part of two successful seasons himself. But they couldn’t carry the legacy and a poor start to the campaign set the tone for the rest of it and by the end of matchday 37, Juventus were out of the champions league spots. Verona held Napoli to a draw in the final game and Juventus won against Bologna, which meant they did eventually finish fourth and sealed a spot in next year’s edition of the prestigious tournament. However, the Champions League drought has continued for them and Ronaldo’s side got eliminated in the Round of 16 by Porto in a big upset.

They won the Coppa Italia by beating Atalanta in the final, but that is the bare minimum by Juventus standards considering the talent on their side. Ever since their exit from the Champions League, rumours of Ronaldo moving somewhere else begun and still go on as his contract ends next year.

The sacking of Andrea Pirlo and the return of Massimiliano Allegri might change some things but no matter what happens, the iconic number seven from Portugal will always remain a legend of the sport.

His career appears nothing short of a fairytale if one solely looks at what he has accomplished in the sport and the number of records he holds. But when you see his work ethic and how much he has given to the game for more than half of his life, it turns out he has earned every bit of success that he has got.

The five-time Ballon d’Or winner with a massive total of 32 team trophies includes another record- Ronaldo is the only player to have won all three domestic trophies in three of Europe’s top five leagues and also finished the top-scorer in all of those three leagues. He did it with Manchester United in England, Real Madrid in Spain and now with Juventus in Italy.

Known as Mr Champions League for his unbelievable records in the tournament, the Portuguese has won the trophy five times. He’s the highest scorer (134) and assists provider (42) in the competition’s history in 176 appearances. With his five goals in Euro 2020, he became the highest goalscorer of all-time at the Euros (14) and is currently tied with Ali Daei for the most overall international goals (109).

Being the highest goalscorer of one of the greatest clubs of all time isn’t a small achievement either and the former Real Madrid star scored 450 goals for the Los Blancos, an all-time club record. The only thing that has eluded him so far is the FIFA World Cup and he will get his last chance at every footballer’s dream for the last time next year in Qatar if things go as planned.

After a sour exit from what was possibly his last European championship, there are a lot of questions popping up regarding his future in both domestic and international football. By the time Portugal plays the next Euro in 2024, Cristiano will be nearly 40-years old, and although he doesn’t look like slowing down as of now, age will eventually take a toll on his performances. But with the FIFA World Cup coming next year, this might not be his last international tournament with Portugal but will it carry the same importance is still unknown.

Ronaldo joined Sporting's academy at the age of 12 before moving to Man United in 2003. pic.twitter.com/M7GXgL4QiF

A 37-year old Ronaldo can be a liability for Portugal at the 2022 World Cup in Qatar and might be sidelined from the starting eleven by Fernando Santos. In such a case, with the personality of Ronaldo, he might even decide to hang up his boots and move on rather than sitting outside and merely being a spectator from the bench.

His future with Juventus is also under serious doubts considering the financial stress the club can relieve by selling the 36-year old who is in the final year of his contract. The Portuguese star earns a whopping €30 million in annual wages it has been troublesome for the Old Lady with all the debt and losses accounted for. There have been the usual rumours of a possible return to Old Trafford, or to his boyhood club Sporting Lisbon but it is still uncertain where Ronaldo will play next season.