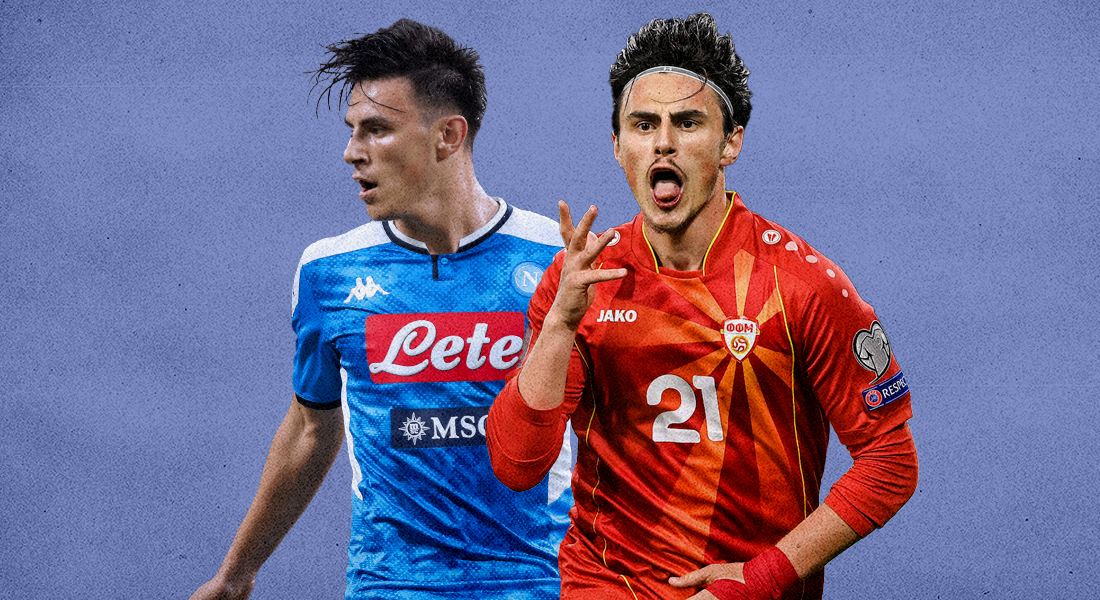 Eljif Elmas is a star in the making in the world of football. He plays for Napoli in the Italian Serie-A as a box to box midfielder. A man of natural quality, it didn’t take long for the Macedonian to make his mark on the game. Elmas just might get his chance at Euro 2020 and a splendid performance for Macedonia would earn him mush deserved plaudits.

The European country is slowly but surely making strides in world football. This was made evident from their qualification to the Euro 2020 which marks their debut. A certain 21-year-old is already playing a huge part in their unprecedented journey. With crucial goals and contributions in the qualifiers, he is the kind of star in a team that will catch anyone’s eyes.

With Euro 2020 right around the corner, FootTheBall brings you a closer look on the Macedonia and Napoli star Elmas.

Hailing from Skopje, North Macedonia, Elmas turned pro at only 16 years of age. He played for his native FK Rabotnikc. He scored one goal in his debut season in 2015/16. The fleet-footed midfielder had a breakout season in the 16/17 season as he scored 6 goals.

The teenager’s talents were quickly noted by Fenerbahce as they moved for him for a fee of €2 million. The Turkish giants gave time for him to gel into the first time as he spent his initial days with the under-21s. The 2018/19 season was more productive as Elmas was integrated into the first team. He scored 4 goals and made himself a first-team regular.

🇲🇰 #Napoli are steps away from completing a deal for #Fenerbahce's 19-year-old midfielder Eljif #Elmas.

A thread, to explore more about the youngster and a shining example of why sometimes stats can't show you everything about a player. pic.twitter.com/7LSQ04kVsC

A man of Turkish ancestry, Elmas turned down advances from the Turkish coach Fatih Terim to play for the Turks and chose to play for his birth country. He made his debut for the under-21s in 2016 which was followed by a senior cap in 2017. He scored 6 goals for Macedonia, including 4 crucial strikes in the Euro 2020 qualifiers.

His exploits in the Turkish league have earned him a move to Naples in 2019.

After a move to Italy, Elmas started to grow into a serious player who could make a difference. Life started slowly in Naples as one would expect. In a new country and a new league, he had to do with a few appearances off the bench for Napoli. Slowly he found his feet as the season progressed.

Eljif Elmas is a real talent. He plays like a consummate professional with years of experience at the highest level. His composure and confidence at the age of 19 is remarkable.

Elmas scored his first goal for Napoli on the 22nd matchday in a 4-2 win against Sampdoria. This was a stepping stone for a more prolific 20/21 season. Napoli coach Gennaro Gattuso was impressed by the 21-year-olds performances and gave him a prominent role.

Elmas has 3 goals and 2 assists for the club this season. He has also gained valuable Europa League and Champions League experience with the club.

Versatility and technique can be said as two of Elmas’ main strengths. Elmas excels in the middle of the park as a creative number 10. Apart from the number 10 role, he can play on either wing. He can be further deployed as a secondary striker also.

The Macedonian diamond has to find more continuity. Is this the turning point? 🕵️‍♂️ pic.twitter.com/qq8uT3xNPl

The Napoli number 7 possesses a strong technique on the ball with an incredible passing range. His thinking on the ball and vision make him a threat on the ball every time. His playing style on and off the ball can be compared to the Spanish legend David Silva who is a supreme technician.

A CHANCE TO SPARKLE

Elmas is already a key member of the North Macedonia national team. After making his debut in 2017, he went onto win 25 caps for the team scoring 6 times along with laying 5 assists.

He is a solid match-winner for them as his two braces against Latvia and Slovenia in the Euro qualifiers have given them 6 points. These exploits made sure that they reached the Euros for the first time in their history.

Elmas warmed up for Euro 2020 nicely after scoring a winner against Germany as Macedonia beat them 2-1 extraordinarily.

Macedonia would be banking on the 21-year-old youngster to guide them to a respectable finish at their first-ever major tournament.

Elmas whos already turning into a serious prospect would be hoping to light up the biggest stage in Europe and become the new Macedonian conqueror.