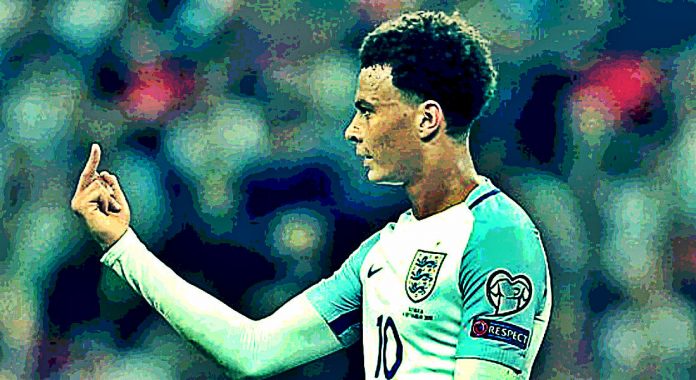 FIFA have opened disciplinary proceedings against Dele Alli over his one-fingered hand gesture during England’s win over Slovakia on Monday.

Gareth Southgate’s Three Lions side are just two points away from registering a place at 2018 World Cup in Russia after they registered a 2-1 comeback win against Slovakia, all thanks to goals form Eric Dier and Marcus Rashford.

In the 77th minute of the game, Alli was not given a free-kick after going down due to a challenge from Slovakia defender Martin Skrtel.

Video footage clearly showed the England star sticking his middle finger up in the direction of the referee.

But, Alli later insisted that the foul gesture was aimed towards the England right-back and former Spurs team-mate Kyle Walker.

A FIFA spokesperson said: “We can confirm that disciplinary proceedings have been opened following this incident. Please understand we cannot comment further at this stage.”

Alli took to Twitter to clear the air after the game tweeting that it was “a joke between me and my good friend Kyle Walker” and Three Lions boss Gareth Southgate also accentuated that his player narrated him a similar story.

“Kyle and Dele were mucking about, and Dele’s made a gesture towards Kyle,” he said.

“I don’t know what the angle picked up by the camera is, so I don’t know if that is clear. The pair of them have a strange way of communicating but that’s what they’ve said when it’s been raised.”

Speaking ahead of Tottenham’s trip to Everton this weekend boss  Mauricio Pochettino came out in Alli’s defence.

“There’s a lot of things worse than this situation,” he said. “It’s true it’s not a fantastic gesture but it’s not a big issue. I don’t think it’ll be a big issue with FIFA or with us.”

“Maybe the headlines are because it’s Dele and something happens. And he’s English. But I think it’s not a big issue. For me, it’s about moving on and not creating important things about this. He was joking.”