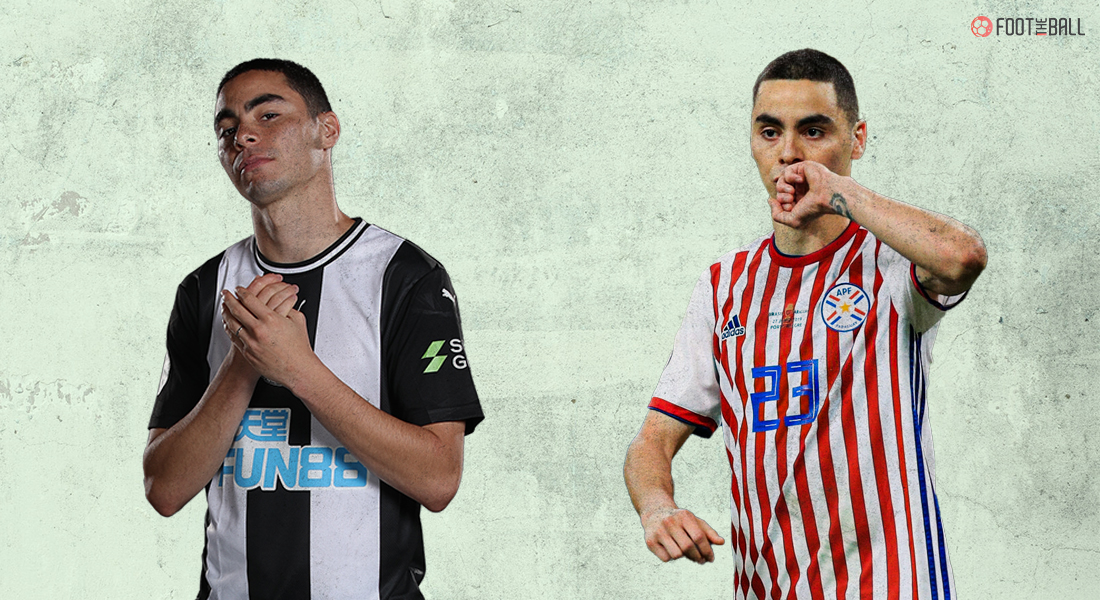 Miguel Almiron is the flag bearer for Paraguay in European leagues. The 27-year-old midfielder who is Newcastle United’s record Premier League signing is also a shining star for his country. A versatile player, Almiron helps his club and country in many positions. Almiron would love to sparkle at the Copa America 2021.

Almiron dominated Major League Soccer for two consecutive years and was undoubtedly the best player in the league for some time. His performances have earned him a move abroad. The transfer fee he commanded was the highest an MLS club ever received.

Though he has struggled initially in the Premier League, he has found his spark again. He sets an example for his fellow Paraguayans to discover their potential and shine brightest. In his prime, Almiron is one of the biggest stars for Paraguay and he will aim to deliver his nation to a respectable finish at the Copa 2021.

Born in the Paraguayan capital of Asuncion, Almiron started his footballing career with Cerro Porteno. Having enjoyed two successful seasons in his native country, Almiron signed with Argentine club Lanus in 2015.

By the time he left his homeland, Almiron was already a star for Paraguay national team at the junior levels. He scored 7 goals for the under-17s and 8 goals for the under-20s. Almiron made his debut for the senior team on 5th September 2015 against Chile in a friendly.

A title-winning campaign with Lanus saw Almiron score 3 times and assist 3 times. His exploits there earned him a move to the MLS.

SUPERB IN THE STATES

Atlanta United FC paid $8 million for Almiron’s services. The league suited his style of play perfectly. Almiron was primarily used in his favorite number 10 role. He used to wreak havoc with his passing and dribbling ability. A keen eye for goal was also one of his key attributes.

Jeff Larenriwicz a teammate of Almiron described him as the “heartbeat” of the team. Those words certainly underline the importance of Almiron to the team. He scored 9 times and further laid 8 assists as Atlanta enjoyed success in the league. The Paraguayan was also named the ‘ Newcomer of the Year’ by the league.

Feliz cumple, Miguel Almirón. Here’s to a player who arrived to MLS, helped build Atlanta United’s identity and deliver one of the most electrifying title-winning squads. The boy who can’t stop smiling. Disfruta! (via @MLS) pic.twitter.com/jWTTjmCAzG

A more prolific second season followed as he helped them achieve new heights. Almiron registered 12 goals and 14 assists as they rocketed to the playoffs. He also scored a goal in the playoffs. With key contributions from Almiron, Atlanta United won the MLS Cup by defeating the Portland Timbers. The club achieved this feat in only their second season of existence.

Almiron’s excellence in the USA was rightly recorded as he was included in the MLS Best XI during two seasons of his stay.

His stunning exploits were noted around the world. Newcastle United from England won the race for his signature during the winter transfer window in January 2019. The Toon side shelled £21 million for the Paraguayans services which was a club record as well as the MLS record for the highest transfer fee.

Almiron had the chance of a lifetime to impress in England and make his country proud. His arrival to Newcastle cheered the fans. Comparisons were made to Santiago Munez, a fictional character from the Goal movies. Munez, similar to Almiron arrives at Newcastle from Latin America and pursues his footballing dream there.

Almiron’s life wasn’t like a fairy tale in reality though. Coming to a different league with vastly different weather, surroundings and style of play, he struggled to adapt. Mid-season transfers are always tough and was made evident once again through Almiron’s struggles.He managed only 10 appearances before a horror tackle from Southampton’s Oriol Romeu ended his season.

It was a big performance from Miguel Almiron on Saturday in the @premierleague as he grabbed two goals against the #Saints. ⚽⚽ #NUFC #PL pic.twitter.com/2GQAAI9BoR

Almiron started the 19/20 season slowly as he was recovering from an injury. He had to wait almost for a year to score for the Magpies. His first goal for the club turned out to be a winner as they beat Crystal Palace 1-0. A fully fit Almiron showed serious glimpses of what he could offer in the second half of the season. A total of the club’s best 8 goals were followed in league and cup as he helped Newcastle avoid the drop.

Almiron was used in a variety of positions by the club. Apart from a natural number 10 role, he was also used as a winger, striker at times. Thanks to his versatility and agility he gave his best output and helped the team’s cause.

Niggling injuries have made this season a stop-start one for him. Almiron still managed to have 5 goals this season. He formed a special bond with French winger Allan-Saint Maximin. The duo are fun to watch when they play together.

ALMIRON TO LEAD THE WAY AT COPA AMERICA 2021

All of Paraguay would be hoping that Miguel Almiron sparkles the best at the Copa. Even in a mixed season, his quality is never to be doubted. He can produce magical moments and turn games in a matter of minutes.

The midfielder has Copa experience in 2016 and 2019. He would like to make the most of it in the third time of asking. Almiron along with Angel Romero and Antonio Sanabria hold the keys to a successful Copa America 2021 for the Paraguayans.

A successful tournament would further raise his stock in world football and give him more chances to move to a bigger club. Almiron the Paraguayan talisman should take the center stage at the Copa America 2021.