VICTOR OSIMHEN STARTED THE SEASON ON FIRE. CAN THE NIGERIAN HOTSHOT LEAD NAPOLI TO THE SCUDETTO?

Luciano Spalletti is orchestrating something special at Napoli. The Tuscan manager had a wonderful start to life in Naples as his side made a winning start. Partenopei registered five straight wins in the league by scoring 14 goals and letting in only two. Though it might be too soon to call them title contenders, his early work certainly deserves merit. A certain Victor Osimhen is in the middle of the storm brewed by Spalletti. The Nigerian striker after a hot and cold debut season is living up to his hype this time.

Victor Osimhen is leading the line at Napoli and at such a young age he is proving to be an efficient striker. The 21-year-old has great strength and intelligence on the pitch along with clinical finishing. When he made the move to Napoli, big things were expected of him. Despite a dull first season, he’s catching fire in his second season. The Diego Maradona Stadium is home to a lot of players rediscovering their best as Hiriving Lozano is also showing how he’s built to the world.

The African continent served up a number of great strikers to the world. Didier Drogba is one such striker whose footsteps Osimhen is trying to emulate. Drogba was Osimhen’s idol growing up. If Osimhen could replicate his idol’s scoring feats, he’s in for a long trophy-laden career.

FootTheBall puts the spotlight on Victor Osimhen and traces his path to the top.

A PRODIGIOUS YET TURBULENT START

Osimhen was born in the Nigerian capital city of Lagos. He registered with the Ultimate Strikers Academy club in Lagos and started his youth career as a forward. A versatile forward, he was firmly in the plans of national selectors. Osimhen hence earned a call to the 2015 U-17 World Cup in Chile. He exploded at the tournament by winning the Golden Boot and Silver Ball awards and leading his side to glory. 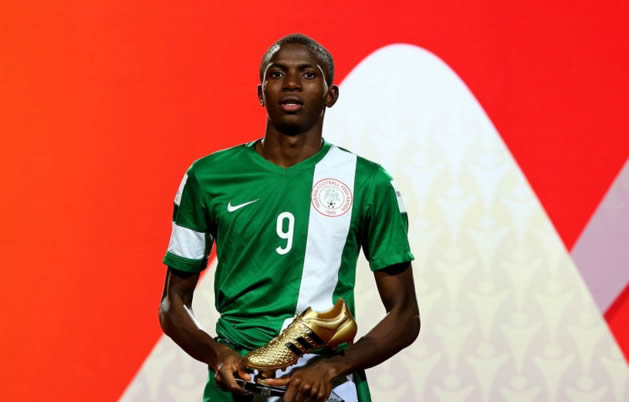 Tournaments like those provide a perfect platform for young players looking to impress. The scouts of VFL Wolfsburg were flattered by Osimhen’s talents and invited him to sign a pre-contract with them. He joined the German club in January of 2017 on a three and a half year deal. It is remarkable that by the time his first contract ended, he became the most expensive African ever. It might be partly down to his unfortunate injuries and then a burst of skill.

Osimhen arrived at Wolfsburg already injured and was forced to wait longer for his debut. Even after his debut, he failed to have an impact and also succumbed to a shoulder injury that prematurely ended his season. Osimhen was immediately shipped on loan to Charleroi, a Belgian club with an option to buy.

A move rejuvenated his career as Osimhen scored his first-ever professional goal in the Belgian league. It was followed by another 19 goals as Charleroi exercised the option to buy him. Another prolific season saw him move to Lille in July 2019.

Osimhen found his heart at Lille and under Christophe Galtier he enjoyed his football again. Lille used a compact 4-4-2 to suit Osimhen’s strengths. In a way, he can be the throwback to a classic old-styled centre-forward. He can hold the ball up letting in runners behind him. A burst of pace also allows him to beat his man and chase long balls over the top.

Osimhen’s exquisite finishing made him stand out in the Ligue 1. He registered 13 goals and five assists in the league as Lille made massive strides in the league. He also opened his Champions League account with a goal in a losing cause against Chelsea. Those exploits saw him named as the Player of the Year at Lille by fans. He was also in strong contention for African Footballer of the Year in the same year.

A breakout season was all that was needed to secure a big-money move for Osimhen. But even he wouldn’t have expected it to be this big. Napoli were dormant in the transfer window and had funds to splash. In Osimhen they saw a pure striker who could be their future for the next ten years. Hence they weren’t bothered by Lille’s massive price tag of €70 million for him. This made Osimhen the most expensive player from Africa in the history of the game.

A LONG WAY TO GO

With that massive price, massive expectations were placed on Osimhen naturally. For someone that young, it would certainly be a test of nerves. His first goal for Napoli came in October 2019 and Osimhen celebrated it with a strong gesture. The young striker held a sign to end police brutality in his homeland Nigeria. It again showed how football became a powerful ground for expressing feelings.

📊 @victorosimhen9 is already on 5️⃣ goals in all competitions this season. It took him until April to get that many last year…

However, this euphoria wouldn’t last long as he was injured while on international duty with Nigeria. The recovery period saw him spend some time in Nigeria where he contracted Covid, further delaying his recovery. Upon his return, he was somewhat overlooked due to his notorious behaviour and lack of match fitness. Though he had his moments, his first season was a bittersweet one.

Luciano Spalletti was in the dugout for the new season. Spalletti is an astute tactician and knows how to get the best out of his personnel. He knew Osimhen should be the fulcrum for his new side. He leads the three-pronged forward line with Hirving Lozano and Lorenzo Insigne flanking him. Frank Zambo Anguissa and Eljif Elmas are running the midfield show to let the forwards thrive.

So naturally combining his skill with the help provided, Osimhen is basking in goals. He scored three in the league already and has two goals in the Europa League. What’s more impressive is the way he is moving and attacking the spaces and getting into goalscoring positions. Osimhen must stay free of injuries and be available for the whole season to see how impactful he could be.

Though they might have set their aim on the Champions League place, the Scudetto might well be within their reach. Since the title race is so tight, each goal matters and they have a man who has got the taste of goals that could lead them to glory.