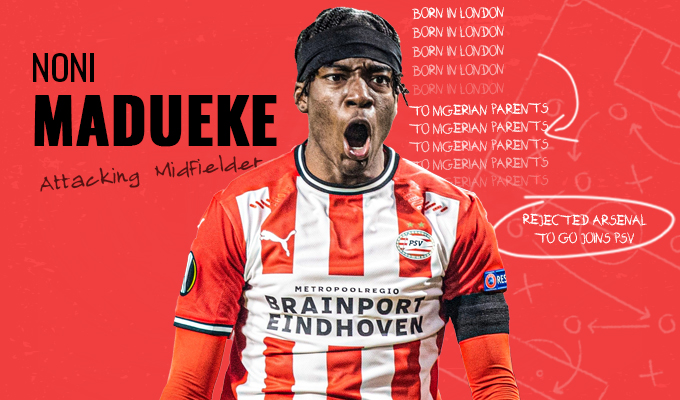 British youth players have found it hard to make the transition from academy to first-team football over the years, but in recent times it seems young British players are willing to take the risk and move abroad to get playing time and exposure.

This path has proven quite effective in recent times after the success of players like Jadon Sancho, Jamal Musiala and Marcus Edwards, who did not make a single appearance for the senior sides of Manchester City, Chelsea and Tottenham, secured moves abroad to Dortmund, Chelsea and Vitoria S.C. respectively. This route has proven to be so effective that Jadon Sancho had since become a superstar at Dortmund and earned a big-money move to Manchester United in 2021, while being the poster boy for British youth players abroad in the process.

Noni Madueke is one such youth player, who is looking to emulate the success of the former Manchester City academy player Jadon Sancho, at PSV Eindhoven.

Born on 10th March 2002, Chukwunonso “Noni” Tristan Madueke, rejected the likes of Manchester United after it became evident that it will be hard for him to get playing time for Tottenham’s first team, he chose to move abroad instead to join PSV Eindhoven in 2018. The 20-year-old English player looks like one of the most promising players in Europe and is generating a lot of chatter around his name in a league littered with youthful talents, the Eredivisie.

A physically strong and supremely creative playmaker, Madueke possesses a wand of left foot which allows him to execute killer through balls and a powerful shot from distance.

Capable of playing on either of the wings and in the hole behind the striker, Madueke predominantly plays on the right flank for PSV, where he has been exceptional. Madueke is fast becoming one of the best all-round attackers in the Eredivisie and Europe.

In addition to Newcastle United‘s deals for Nick Pope and Sven Botman, there have been many transfers taking place at this stage of the 2022 summer transfer window across the Premier League. From Erling Haaland’s move to Manchester City and Richarlison’s switch from Everton to Tottenham Hotspur. Another big transfer which took place in the past few weeks saw Liverpool break their club record fee to bring Darwin Nunez to Anfield from Benfica for £85m.

In recent days, Newcastle had been linked with a move for PSV Eindhoven winger Noni Madueke. However, the Toons were not the only club eager to snap up the English winger, with other Premier clubs having joined the race as well. Chelsea have now officially swooped in for the now former PSV winger. But why was there so much demand for a not-so-known player who plays for PSV, with so many better options out there? Here’s why.

Before moving to the Netherlands, Madueke spent the entirety of his youth career in Tottenham’s youth system. He captained their under-16s side at the age of 15, where his performances got him promoted to the under-18s, where he stood out too. He made his name in the Sonnenland Cup, where he picked up the best player of the tournament accolade, as he led Tottenham’s youth side to the semi-final of the tournament. Madueke became a star at the youth levels, earning a lot of praise from Ex-Spurs coach Mauricio Pochettino, who was a massive fan of the winger.

Madueke was pursued by Chelsea and Manchester United after his performances, but chose to move to PSV. After arriving in the Netherlands it took Madueke very little time to settle in as he was fast-tracked to the first team after he scored 18 goals and set up a further 8 goals for PSV’s youth sides since joining. He made his first-team debut against Groningen on the 8th of March 2020, just before the Dutch league was voided due to the pandemic.

The 2020-21 season arguably turned into the young star’s breakthrough season. Madueke had looked at home playing under then-manager Roger Schmidt’s attacking and high-pressing system at PSV. In the Eredivisie, he has 14 goals and 8 assists, and his underlying numbers are extremely promising.

His direct goal involvement per 90 sits at an astounding 0.83 so far in his PSV career. He takes about 3 shots on each game with half of them coming from inside the box. Noni Madueke has also showcased elite dribbling ability as he beats his man 4.8 times a game, which often allows him to create high-quality chances too. He has an overall of 83% pass completion rate with an xA of 1.49 in Eredivisie so far.

Arguably he does not play in a very strong league and in fact plays for one of the strongest sides in the Dutch league his numbers are still extremely impressive for a 20-year-old playing in a foreign league.

A player’s mentality is often one of the most important and intangible parameters of success. It is often seen as the reason why promising youth players fail to make it to the highest level.

In an interview with ESPN, Madueke was caught saying  “I am developing well, but I can still improve in enough areas. I demand a high standard of myself. But so far it is going well. Hopefully, I can continue with this form for a long time and score in the next game, and the game after that and the game after that.” This shows a certain drive and professionalism at a young age that is seen rarely, he also showcases leadership skills that landed him the captaincy of the spurs youth sides up until the under-16s, despite being just 15.

Noni Madueke also seems to love healthy competition, he seems unfazed under pressure and thrives in tense situations. In the same interview with ESPN, he can be quoted saying ‘We have a lot of talented players in the front, while there is only room for three or four players. Of course, there is competition, but there is also a nice harmony between the players. I always want to be the best, that’s my mindset. The fact that we have to compete with each other every day is only a good thing. It keeps us on our toes. I like competition, so this is perfect.”

The younger winger sure looks ready for the world stage and seems to have a very focused head on his shoulders and his willingness to improve and learn has caught the attention of his former manager Roger Schmidt who said “He is also able to read the situation, get to the right rooms and thus be in the right place”. He further went on to say  “He has a good sense of that, with his timing. Technically he has the skill in a one-on-one. He is ready to fight for a place in the team.” Schmidt finally summarized that he thought Noni Madueke is a ‘Special’ talent and can be one of the best players in the world in the near future.

In fact, Madueke’s number and style of play is often reminiscent of a young Arjen Robben, who was also a left-footed right-winger and made his name at PSV, before earning his first big move to Chelsea.

Madueke loves to cut in from the right-wing onto his preferred left foot to cause havoc for defences. Capable of beating any defender in a one-on-one situation and blessed with sublime vision he can open up defences. He is also capable of unleashing devastating shots with his dominant foot from distance. He possesses flair with a killer instinct, something not seen commonly in a player as young as Madueke. So it is quite apt to compare him to the former Bayern Munich winger.

Hopefully, the void that has appeared in world football for an elite left-footed right-winger after Robben’s retirement can be filled by Madueke, and according to many scouts, he is well on his way to do so.

His performances in a short senior career have garnered interest from the likes of Newcastle United, Tottenham Hotspur and Leicester City, who have been looking at the winger since the start of the 2020/2021 season. Although his contract at PSV is valid till 2024, surely fans around the world hope to see him in a top-five league this summer, with heavy interest from the Premier League itself.

Noni Madueke has lit up the Dutch league with his displays. He has truly announced his arrival on the European stage, and pundits and coaches see him developing into a world-class winger, who can play for the best clubs in the world, which he has eventually done after agreeing to join Chelsea.

The former Spurs academy graduate has now racked up over 50 appearances for PSV. Madueke only signed a long-term contract at the end of 2021. With his switch to Chelsea, indeed the Dutch outfit appear to have already covered a potential exit by signing Xavi Simons from PSG.