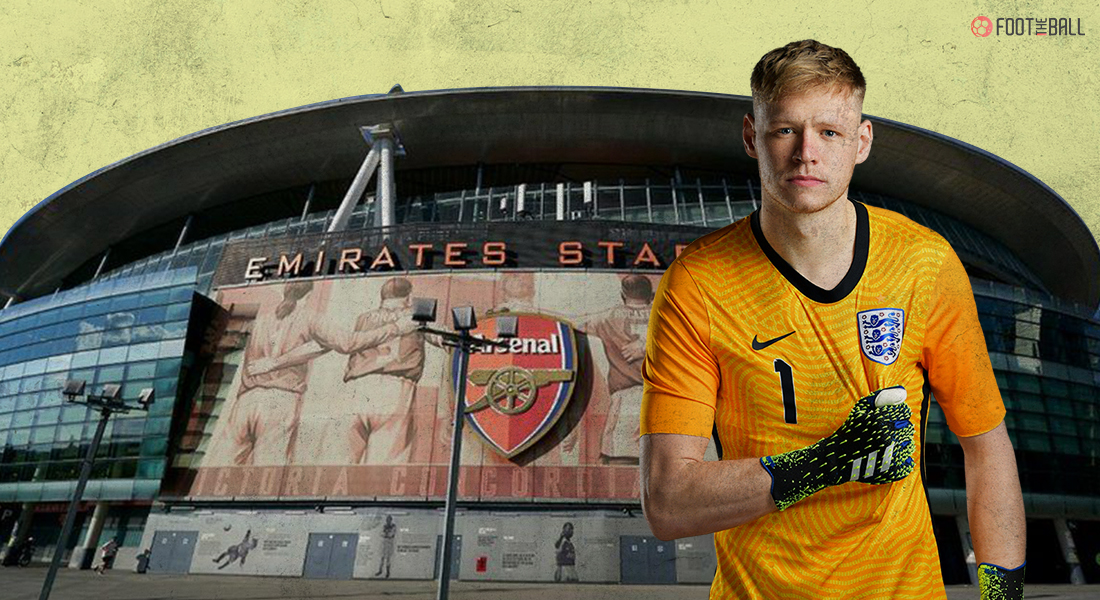 Arsenal have signed goalkeeper Aaron Ramsdale after months of speculation. The North-London club have announced the agreement for the transfer in a move that was months in the making. The deal will set back Arsenal by about £30 million, with £24 million as upfront payment along with the rest as performance-related bonuses. The 23-year-old goalkeeper will now link up with a big six team for the first time in his career.

Welcome to The Arsenal, @AaronRamsdale98 ❤️

Ramsdale joins Arsenal as a backup to Bernd Leno with an eye on usurping him in the future. This might allow the current backup goalkeeper Runar Alex Runnarson to leave the club after an uninspiring spell in London. Ramsdale would become Arteta’s fifth signing of the summer after snapping young talents like Sambi Lokonga, Nuno Tavares, Martin Odegaard and Ben White.

Mikel Arteta is given time at the Emirates stadium to build a young squad that is capable of taking them to the previous glory. As a part of the Brexit strategy, Arteta is understandably investing in young English players which might pay them off in the long term.

So how does Aaron Ramsdale suit Arsenal? What does the English under-21 international offer to the gunners? Is he a value for money signing? FootTheBall grades Aaron Ramsdale’s big-money move to Arsenal.

Aaron Ramsdale is every bit of a modern-day goalkeeper. Standing at 6’2ft he is an imposing figure in goal and has long reach to either side of the goal. In his short professional career, he has impressed everyone. After leaving Sheffield United as a teenager, he joined AFC Bournemouth where he got his major breakthrough.

Ramsdale’s starting position always helps him in goal. He starts 3 yeards ahead of the goal line with a crouched stance. This lets the English goalkeeper dive to either side of the goal or have a full body leap to save dipping shots. Ramsdale also has sharp reflexes in saving close up shorts.

He specializes in one v one situations as he makes the best use of his tall frame. He rushes onto the attacker and makes himself big and doesn’t mind taking one for the team. While it comes to defending crosses he has a strong arm and parries the ball out wide instead of just hoofing it forward.

Everything about this interview ❤️

💬 "Hopefully I can play and play well in front of a full, packed Emirates Stadium. I can't stop smiling. It's one of those days."

Ramsdale is a strong player with the ball at his feet. He has good distribution and his long passing is on target usually barring an error from the receiving player. This helps sides play out from the back effectively and beat high press against teams like Manchester City and Liverpool.

£30 million might sound a huge amount for a backup goalkeeper. But taking the players age, nationality and potential into consideration it might prove to be a smart bit of business in the end. Besides the sum to be paid upfront is just £24 million. Arsenal sold Emiliano Martinez for around £17 million in 2020 and might reallocate those funds to sign another backup goalkeeper.

It's time for a special message from our latest summer signing 📲 pic.twitter.com/jzGX7SXgAb

Arsenal owners, the Kroenkes have been accused of not investing in the club. To come clean from their end, the American owners have taken money out of their pockets to back technical director Edu and manager Mikel Arteta to rebuild the squad. This move might prove to be a one for the future as goalkeepers peak later in their career. Hence Ramsdale needs to be patient to get his opportunity at the club and prove his worth.

Ramsdale comes as a part of the post Brexit transfer strategy of Arsenal. Also, Mikel Arteta believes in building a young squad that could grow together and compete for honours in the future. Ben White, a young English centre-back was brought for £50 million as part of that. Ramsdale’s imminent signing would be another piece in the young English defence. The Gunners have other English talents like Emile Smith Rowe, Bukayo Saka and Folairn Balogun.

Ramsdale would be the backup keeper at Arsenal in his first season. He might expect to start cup games like the FA Cup and Carabao Cup. He must always be in top shape as an unexpected injury might open up doors for him.

Ramsdale through his numbers can make a strong claim for starting spot. He is statistically similar to Leno and in some aspects fares better than him. According to FBRef, Ramsdale has a save percentage of 70% in the league last season that is better than many keepers like Edouard Mendy, David de Gea, Lukasz Fabianski and Bernd Leno himself.

When it comes to pass percentages he has a high percentage of 70% with an average distance of 52 yards. This makes him a very efficient ballplayer to kickstart counterattacks and get out of pressure situations.

There are no huge expectations on Ramsdale currently as he would be a side cast to Leno in his first season. Leno by his standards had a sub-par campaign last time. He would be looking to make amends this season but the opening day 2-0 loss to Brentford wouldn’t have helped his cause. If he recaptures his form, Ramsdale would have to bide his time on the bench.

Aaron Ramsdale – On the ballpic.twitter.com/jH1hV3EiSe

But when he does play for Arsenal, he can contribute his best. As he has played for lower teams like Bournemouth and Sheffield he is used to facing a higher number of shots. A better defence at Arsenal would certainly protect him better and dominate the possession. This provides a different kind of challenge as the goalkeeper has to maintain strong levels of concentration to stay in the game. It is that unnerving focus that separates normal goalkeepers from world-class ones.

This move to Arsenal would no doubt be a massive step up for Ramsdale. The club also has to trust his potential to benefit in the long run. He is only 23 years of age and has limitless potential. He can be the long term goalkeeper for Arsenal for the next 10 years.