The goalkeeping situation at Arsenal has been a problematic one for manager Mikel Arteta since his arrival at the club in the December of 2019, replacing Unai Emery, who was sacked after a dismal run of results in the first half of the 2019-20 season.

Bernd Leno, Arsenal’s current number one, has been at the club since 2018 and although he had finished second in the Arsenal Player of the Award season for 2019-20, his performances started to tail-off towards the end and that tail-off continued heavily as mistakes were committed frequently in the 2020-21 season by the German.

Hence, Arteta looking for a new goalkeeper is not a surprise for the fans and general public and the name of Aaron Ramsdale is being heard quite evidently in the transfer market. But we, at FootTheBall, believe that the Gunnars should stay away from signing the Sheffield United goalkeeper due to many reasons, which are discussed below.

We will come straight to the point. Although Sheffield United have been relegated to the Championship, which in theory, makes the deal simpler to finish, Ramsdale is going to cost Arsenal around £20 million and with other suitors interested in the signing of the 23-year-old, the price is likely to increase, and the Gunners cannot afford that to happen.

An incredible 1st half from the 22yr old. pic.twitter.com/uUBfZHPdlb

Their whole squad must go through surgery as Arteta looks to improve on the abysmal 2020-21 season in which the club finished 8th in the league table. Apart from a new goalkeeper, they need at least two midfielders if not three, a right-back, a centre-back, and a backup winger if they ought to challenge for the European spots next season.

And if Arsenal plan to do that, they cannot spend the amount of money quoted for Ramsdale, as he is still not at the same level as other young goalkeepers in the division.

Apart from the transfer fee, Ramsdale’s qualities, strengths, and weaknesses are to be observed.

On a positive note, the Englishman’s shot-stopping skills are one of the best shot-stoppers under the age of 23 in the top five leagues. His positioning, reflexes, and safe hands mean that he is extremely hard to beat as seen below. 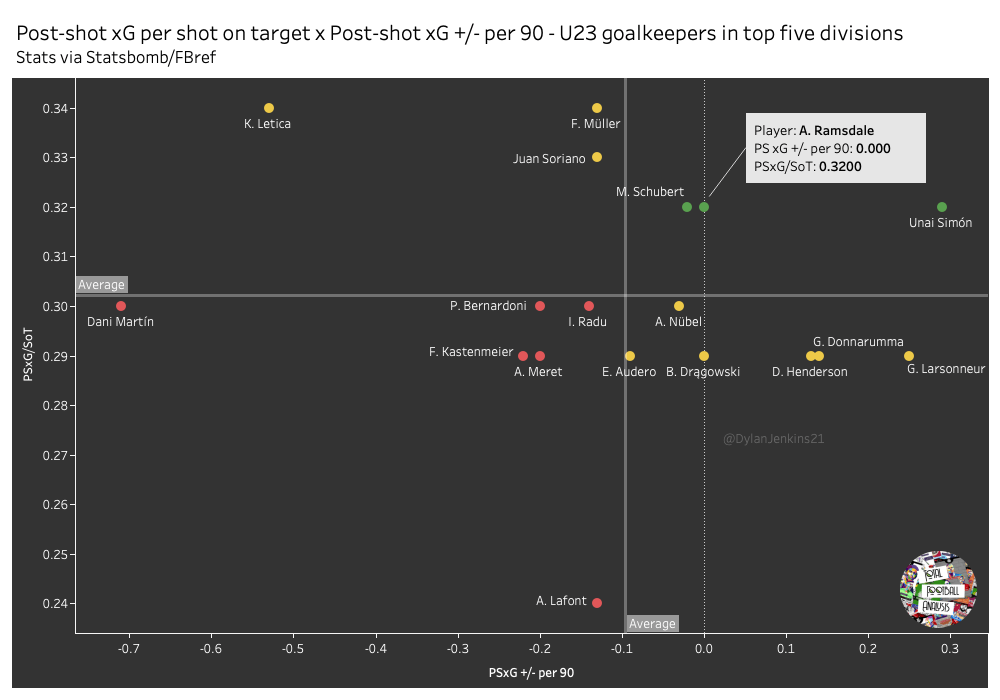 According to Fbref, His save percentage this season is also on the higher side as he is one of only two keepers in the Premier League to have registered a save percentage over 70% after facing more than 200 shots. But this stat is a bit skewed due to the high number of shots that he faced at Sheffield.

On the negative side though, Ramsdale does have a weakness when it comes to dealing with central one-on-ones. And whilst it was not quite visible during his days at Bournemouth, it certainly came into the picture with Sheffield during last season. Ramsdale’s technique leaves him open to being chipped because he is so low to the floor. The 23-year-old must improve this trait and remain on his feet for longer, standing up tall. 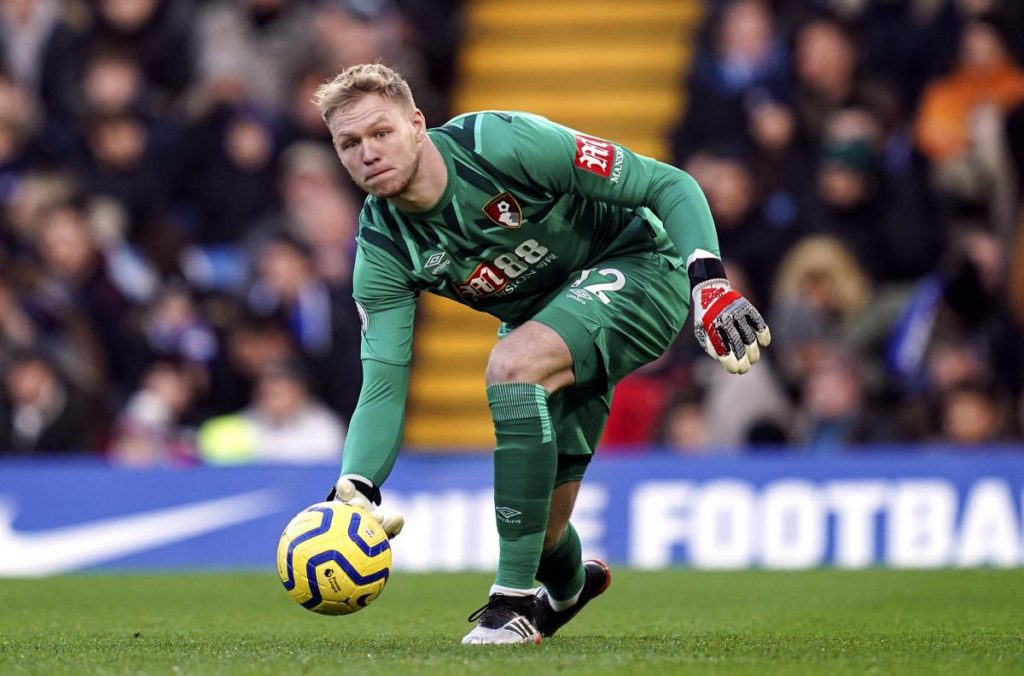 Another problem that Ramsdale has is his lack of confidence to take and catch crosses and set pieces. He is not the most active off his line, only stopping 6.2% of crosses that he is faced, and his aerial win percentage is 82.61% which is lower than the league average. But when he does act, he tends to punch rather than catch.

There are options for the Gunners, although them being limited. The first one is the signing of the primary target, Andre Onana from Eredivisie giants Ajax. Although he will only cost Arsenal around £7m, Onana is currently serving a 12-month doping ban issued by UEFA after testing positive for Furosemide, a banned substance. 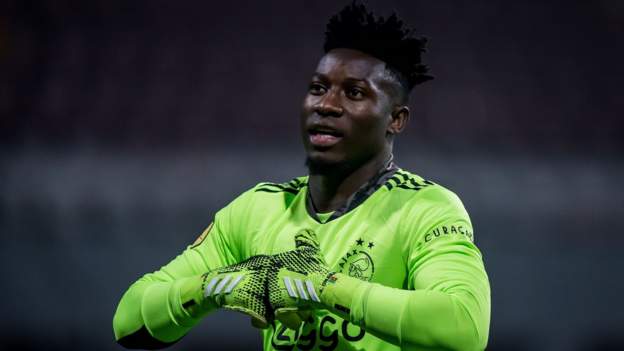 However, the Court of Arbitration for Sport had reduced the ban to nine months, which makes the Cameroonian eligible to compete professionally from the first week of November and train with a club from 3rd September.

Arsenal could risk this transfer instead of Ramsdale, selling Leno for a good fee which can be invested back into the squad and making the Matt Ryan deal permanent, and entrusting the number one spot to the Australian until the arrival of Onana into the squad. 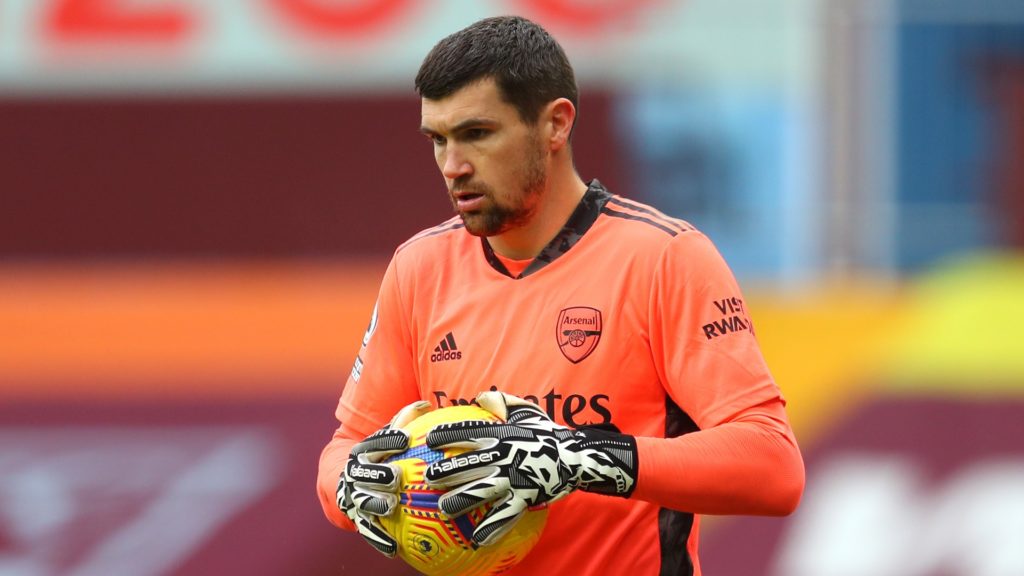 Or else, Arteta has to put trust in Leno to do the job for at least another season, as we feel that the Arsenal squad has a lot more important problems which need to be solved as soon as possible than the goalkeeping situation. Matt Ryan could also be entrusted with more responsibilities rather than just warming the bench as the backup goalkeeper.