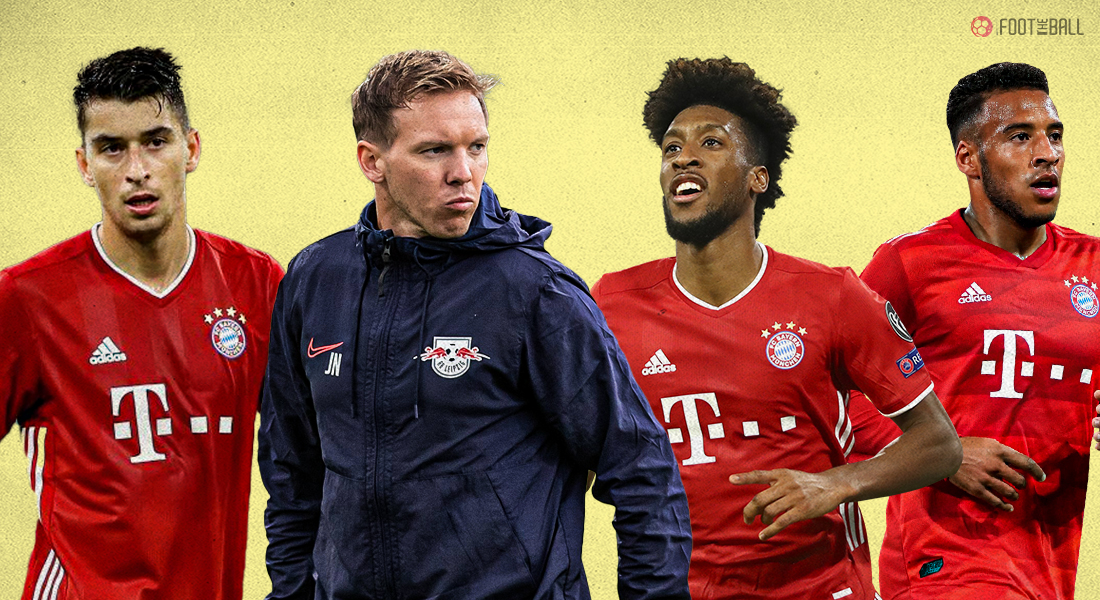 The German conquerors are prepared for another campaign of extravagant, swashbuckling, and ostentatious carnival of football. While Bayern’s domestic dominance is unparalleled, the two-time treble winners will look to capture their fallen European crown when they begin their hunt for glory. With a new season knocking on the door, it’s crucial to examine the players Bayern could sell to offload their overburdened roster.

While the Bavarians rarely lack a fragment of talent in their jaw-dropping roster, Julian Nagelsmann’s appointment could bolster Bayern’s silverware dreams. With the summer jamboree of football inching closer, it’ll be crucial to see who is shown the exit door by the German club. While a handful of players could be sent out on loan, a few of them could be permanently sold to lighten Bayern’s roster.

He occupies a large portion of the field’s centre half but loves to dominate possession on the left flank. He can use his favourite distributing routes commanding the centre while constantly putting the rivals under pressure with his staggering passing abilities. Roca wanders the centre, monitoring the ball’s progress to ensure he’s available throughout the brawl. Unfortunately, the magical Spaniard faltered in Germany as the star-studded Bayern roster couldn’t find space for Roca’s brilliance. Appearing just 6 times for the German champions, the emergence of Joshua Kimmich and Leon Goretzka overtook Roca’s position in the squad. Injuries further ruined the Spaniard’s chances of revival as once Hansi Flick lost the defensive-midfielder, the Bayern squad adopted a system without Roca.

Marc Roca joined the German giants a year ago after Flick looked to bolster his squad’s defensive capabilities. Secondary to Kimmich and Goretzka, the Espanyol magician remained injured for large parts of the campaign and failed to capitalise on opportunities presented to him. Bayern needed a Granit Xhaxa or Sergio Busquets when they signed Roca but indeed added an injury-wary defensive midfielder to their ranks.
Lastly, Roca could have solved Bayern’s problem of diminishing depth.

Marc Roca's ankle injury will keep him sidelined for up to 8 weeks [Kicker] pic.twitter.com/7bkT8GSk1W

Last season, the Bavarians constantly backed their experienced veterans to finish the job. With an injection of fresh blood missing, Roca was the perfect substitute option for Hansi Flick. The last piece in Bayern’s puzzle, Roca’s performance dipped in training as Flick constantly benched the Spaniard, sometimes even leaving him waiting in the stands. With Bayern looking to clear deadwood, the outfit in Red could sell Marc Roca and bid for a budding defensive-midfielder like Belgium’s Sambi-Lokonga.

Who would have thought that the electrifying Kingsley Coman would soon become a baggage for Bayern Munich? Allianz Arena’s world-class signing, Kingsley Coman juggled between Juventus, Paris, and Bayern before settling with the German giants. But Coman’s indecisive outings saw him become a secondary to German winger Leroy Sane, as the Manchester City signing dominated Coman’s position in Flick’s roadmap.

Kingsley Coman is an unpredictable player, one day he could be the torch-bearer for Bayern’s treble while on another day he could smash the ball into advertisements rather than the frame of the goal. The problem for the Frenchman was the second type of days highlighted Coman’s tenure at Bayern, while the glory days were short and crisp. The defenders had an answer to Coman’s dazzling runs, the Frenchman’s flamboyance faded away, and the goals dried up as Flick’s frustration became evident.

Team doctor Dr. Hans-Wilhelm Müller-Wohlfahrt has confirmed a small capsular ligament tear in Kingsley #Coman's left knee, which will require him to wear a splint. He will be sidelined for the time being.

Robert Lewandowski bombarded the Bundesliga with goals in Bundesliga, enabling Flick to start fewer forwards and more midfielders. The Frenchman rattled the rival’s net just 5 times in the German league with pundits questioning his selection in Flick’s eleven.
The price tag of 21 million euros might have not cost Bayern a fortune but Coman’s atrocious outings in Germany and Europe will hurt the Germans who might not be able to make it to Nagelsmann’s silverware winning blueprint. And if the two have different ideologies, Coman could be one of the players Bayern are looking to sell.

A staggering talent, Bayern splashed 41.5 million euros for Tolisso’s services after he enjoyed a marvellous Ligue 1 campaign with Lyon. Corentin Tolisso was tagged as a box-to-box midfielder who could chip in pivotal goals. The Frenchman smashed goal-scoring records falling behind two Bayern veterans, Thomas Muller and Robert Lewandowski, proving his big-money transfer to Allianz Arena.

But the biggest question shrouding Tolisso’s stint at Bayern was his shambolic defensive support to his backline. Tolisso rarely slides in for a tackle and is easily beaten by the simplest of trickery by rivals. First, it forced Arturo Vidal to defend for large parts, then the pressure fell on Kimmich’s shoulders but Tolisso’s defensive numbers didn’t improve. Nagelsmann has shown at RB Leipzig that he believes in dictating the midfield, commanding possession, being defensively sound, and then belting strikes but Tolisso lacks Julian’s requirements.

So if the Frenchman doesn’t want to be tagged in the ‘Big Cash, No Splash’ category he could fabricate his magic in other parts of Europe. For instance, Ronaldo Koeman’s Barcelona sometimes lacks attacking flair, something Tolisso could provide with De Jong and Busquets labouring at the back. Or Arsenal’s midfield might need a Frenchman to convert the scenario at Emirates, scoring 10 goals a season for the Gunners. Tolisso has never complained about the manager benching him and is always ready to go the extra mile, a couple of seasons away from Bayern could give the deadly winger time to sharpen his sword and arrive in Germany as a lethal weapon added to the Bavarians’ arsenal. While Bayern won’t even get half the price they paid for Tolisso, a summer away from Germany could result in an updated version of the Frenchman. The front-runner to leave, Tolisso could be one of the players whom Bayern could sell before the German league kicks-off.