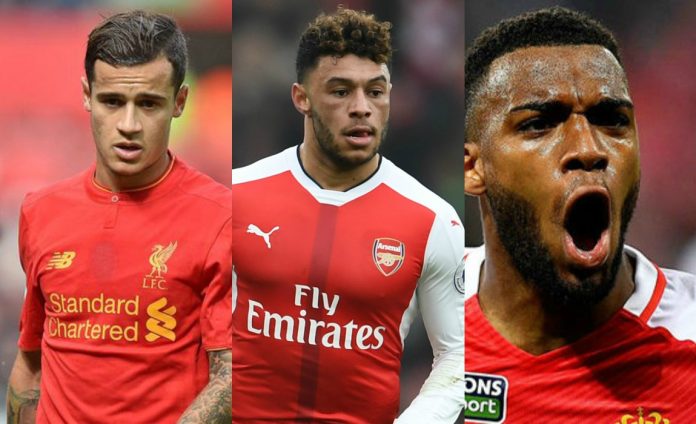 Initially the Reds were adamant that their main asset would not be going anywhere this summer, but signs in the last few days suggest that the Brazilian could be heading to the Nou Camp, although Barcelona could face late competition for Coutinho with PSG reportedly keen to deal another serious body blow to the Spanish giants .

Should Coutinho move to Spain, it could spark a rush of transfer activity as the big boys look to plug the holes in their squad.

If they lose Coutinho, Liverpool will desperately need a creative midfielder particularly with Adam Lallana out long term with a thigh injury, and they could turn to Arsenal’s Alex Oxlade-Chamberlain.

Oxlade-Chamberlain has blown hot and cold since his move to the Emirates in 2011, but with only a year left on his contract he could be on the move.

With no Lallana and probably no Coutinho there will be a slot in the England international’s favoured central role on offer at Anfield, whereas he’s been deployed as a wing-back as part of Arsenal’s change to a 3-4-3 formation in recent months.

Gunners boss Arsene Wenger has been keen on Monaco winger Thomas Lemar all summer, but should he lose Oxlade-Chamberlain another wide man will be a top priority.

The 21-year-old scored 14 goals for the French champions last season, meaning he would ease some of the goal scoring burden on Alexis Sanchez and Alexandre Lacazette.

Despite not having the lure of Champions League football Arsenal have already persuaded Lacazette to switch the French league for the Emirates and Lemar is now said to be keen to follow suit.

Monaco are holding out for £50 million for Lemar after already losing Tiemoue Bakayoko and Benjamin Mendy.