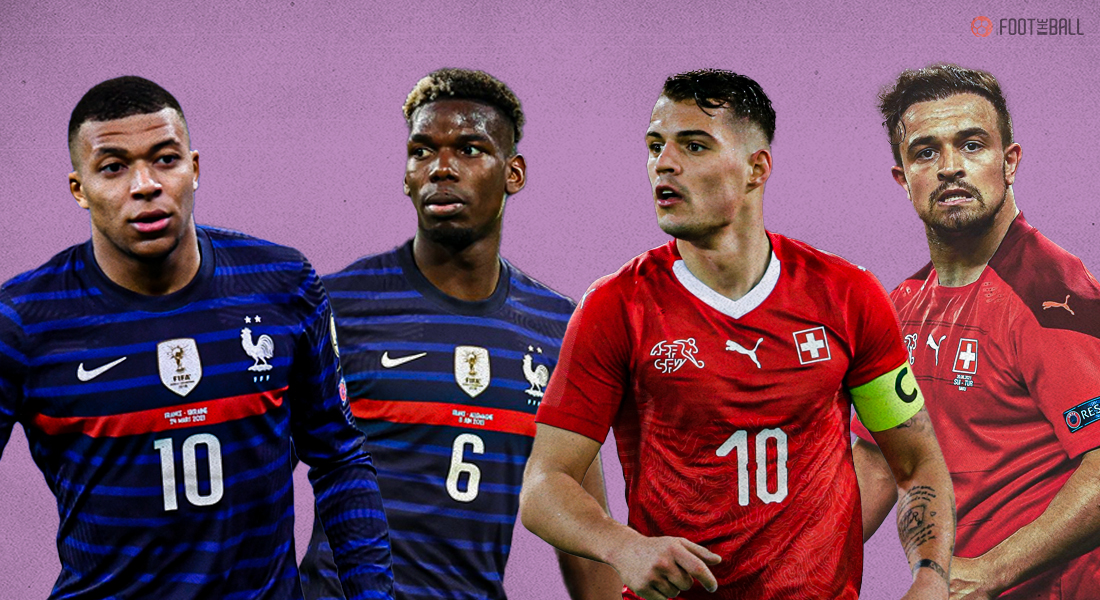 Individual brilliance has taken teams to glory in the past and it still holds key to many tight matches. Games can be won by using an individual to his strength and by exploiting the opposition’s weaknesses to amplify the team performance. Whether it is a fired-up Marouane Fellaini in the box used to put off defenders or a Michel Platini in an advanced midfield role who scored 9 goals in five games that led France to the title.

With all the technology and in-depth analysis that’s added to the sport, no team can keep their impact player a surprise and the opposition can cancel out the individual with tactical remodelling. This creates some of the most entertaining and fierce on-field individual battles which apart from giving a great watch to the viewers, also changes the tide of a match into one team’s favour.

The knockout stages of Euro 2020 begin this Saturday with the enticing Round of 16 games. One of the most intriguing fixtures is that of France, who take on Switzerland at the National Arena in Bucharest, Romania. The fixture that looks lopsided in the favour of Les Bleus has more to it than meets the eye and will take Didier Deschamps’ side a great bit of homework to find a way through to the quarter-finals.

Midfield holds the key to success, as they say, holds true in regard to France vs Switzerland fixture where both teams try to win games by dominating the central area of the field. France has been successful in keeping the midfield under their control with the Manchester United superstar Paul Pogba dribbling, passing and making quick recoveries to keep hold of the ball and not letting the opposition intrude into their defensive zones.

The responsibility to keep Pogba under control will be with another Premier League star and Switzerland’s captain Granit Xhaka. The Arsenal player is known for outmuscling his opponents and snatching away the ball before they can reach a dangerous position. Xhaka has performed well in the group stage and helped his team keep more of the ball in two of the three games.

The 28-year old Arsenal man has looked much comfortable on the ball for his national side, keeping a pass completion rate of 92% while making a whopping 20 ball recoveries in three games.

Pogba was the key to France’s important victory against Germany that put them through to become the table-toppers in the Group of Death and also performed well in the latter two matches against Hungary and Portugal too, both ending in a draw. He attempted nearly 200 passes in the three games with an 85% accuracy which includes the line breaking long balls that he is famous for. The 28-year old can be really dangerous with the ball if allowed space in the midfield and Xhaka will need to keep the pressure on the Frenchman to halt their attacks.

It will be an intense battle between the two as their opposite numbers, Xherdan Shaqiri and N’Golo Kante have a battle of their own.

Just like Paul Pogba, Xherdan Shaqiri runs the show for Switzerland and every attack goes through the Liverpool man. He is protected by a two-man midfield pivot that allows him to move forward into dangerous areas and create chances for his teammates and find opportunities to shoot the ball himself. He will be lined up against the ubiquitous and invincible N’Golo Kante who specialises in neutralising the opponent key players.

N’Golo Kante is already getting Ballon d’Or shouts for his performances in the closing rounds of the Champions League which saw Chelsea become the European Champions for the second time in history. His anticipation and speed acts as a destructor for opposition attacks and lets France use its creative players higher up the pitch.

Shaqiri and his forwards will be up for a huge task getting past Kante when facing an all-star French side. The 29-year old Swiss international will be crucial in creating chances for his side with his engaging passing, one-twos and accurate through balls. Another great addition that Shaqiri brings to the Swiss side is his long-range shooting as seen in his goal against Turkey.

The Liverpool midfielder has two goals and one assist in three games and will be a tough nut to crack even for Kante, who, on the other hand, has made 14 ball recoveries and eight tackles in the three games.

Switzerland can bend the tie in their favour if they can manage to score first and Ngolo Kante is the first line of defence that they need to break.

Another difficult challenge for the Rossocrociati will be to nullify the Paris Saint Germain speedster Kylian Mbappe on the left side of France’s attacking trio. Mbappe is one of the most sought-after young forwards in the world for his evasive pace and yet unbelievable control of the ball. The 22-year old forward made 34 goal contributions in the league for PSG in merely 31 appearances and it still doesn’t do justice to the talent he has at his disposal.

The big task of covering the young talisman will be on the shoulders of another young sought after player in the Swiss shirt, Nico Elvedi. The 24-year old centre-back is deployed on the right side of a back three and will directly face the French forward in a one on one battle.

While it’s almost impossible to catch the movements of Mbappe, Elvedi is known for his great reading of the game as well as his physicality. The Borussia Monchengladbach defender is excellent at intercepting opponent movements and breaking down attacks with his imposing physique. Nico Elvedi averages 1.7 tackles and 2 interceptions per game, making his presence felt on the right side of the Swiss defence.

Mbappe hasn’t been able to get on the scoresheet in the three group games and will be even more hungry to score against the considerably weaker opponents, but Nico Elvedi will be no less a challenge than what he faced in the group stage.