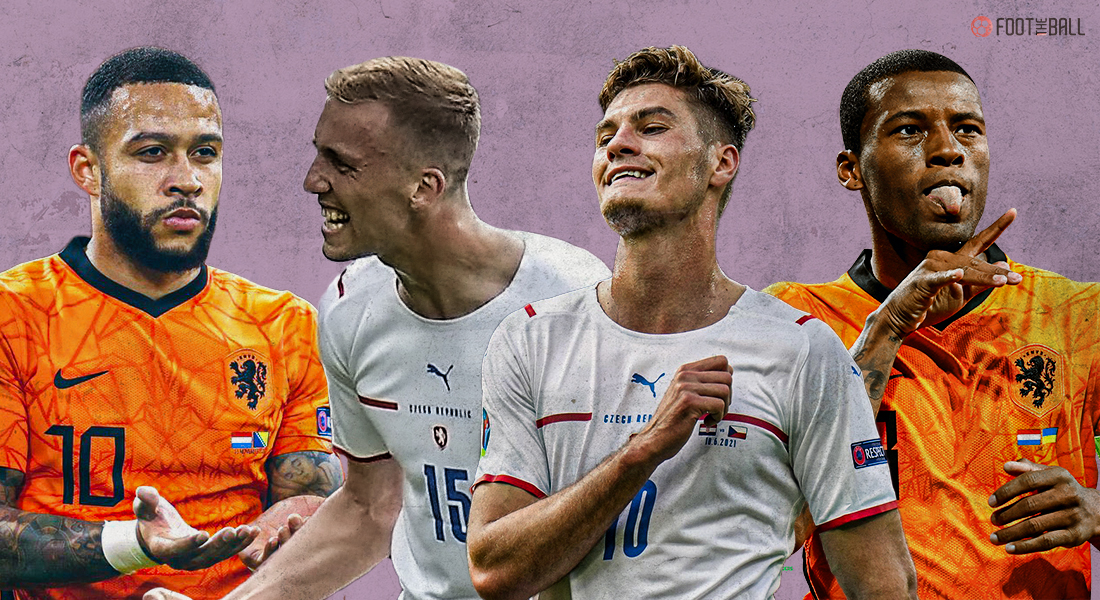 The Netherlands were one of just three teams in the competition to earn maximum points in the group stages, and their prize for advancing to the next round is a showdown against the Czech Republic in the Euro 2020 round of 16. The Netherlands have been firing on all cylinders, winning three games out of three and scoring eight goals in the process, and will be fired up ahead of this clash.

The Czech Republic was one of Euro 2020’s surprises as no one anticipated them to be at the top of Group F after the first two matches, although finishing third at the end of the group stage.

In what promises to be a mouth-watering fixture, FootTheBall has compiled the best-combined XI from the two squads.

It was a tough choice between Maarten Stekelenburg and Tomas Vaclik, but the Czech Republic man gets the nod since he is much younger as well as has been the busier man between the posts. Vaclik is a talented and experienced goalkeeper who has been manning the net for his country for the past 9 years. The goalie is quite stable on the ball and can play it out from the back. Although he isn’t the best or most well-known player in his position, on his day he can pull off some exceptional saves.

He had a good performance in the Euro 2020 group stages, but he will have his work cut out for him in the round of 16 when he encounters the Dutch offensive firepower.

This is Denzel Dumfries’ first Euros and the PSV man has announced himself on the biggest stage with a roar audible from miles away. With two goals in their opening two matches, the 25-year-old has been one of the most influential players for Oranjes offensively.

Although, he isn’t much less effective defensively as well. In open spaces and one-on-one situations, he is an excellent defender. He is a right-back who is incredibly powerful and has incredible speed, allowing him to easily get into the final third. The question now is whether he would be able to replicate his form from the group stages in the Round of 16.

Matthijs De Ligt is always alert and concentrated, always checking his shoulder and signaling his teammates where they should be positioned. His overall reading of the game, both in and out of possession, allows him to be well-positioned and ready to mark and track his opponents’ runs at all times.

Following talking about the technical side, the Dutchman is a beast when it comes to defense. The strong and rapid defender excels defending open spaces and in one-v-one situations. He is a tough match-up for any attacker. De Ligt is a natural leader who will continue to be in the vanguard of his country’s defence going ahead.

In the absence of Virgil van Djik, Stefan De Vrij had enormous shoes to fill, which he has done well up to this point. The Netherlands have two of the best leaders in the game at the core of their defence in De Vrij and De Ligt.

Not only does De Vrij motivate others, but he also improves them – one of the most important traits for a defender to have. He instills confidence and self-assurance in his comrades by ensuring that no matter what transpires, he will be there to tackle it.

A Chelsea academy product, Patrick Van Aanholt is a prototype modern-day wing-back. The pacey left-footed Dutchman offers a live threat going ahead. From a defensive shield, Aanholt can also function as a dagger on the wings.

His first touches are always incisive and he is always aimed at being vertical and talking on his opponents. And his acceleration and control allow him to frequently eliminate rivals in 1v1s by carrying the ball forward.

The first Czech player on the board is the reliable Tomas Soucek. He has thrived the most as a pivot while being capable of acting anywhere in the middle of the park. He is flawless under pressure, with an impossible-to-defend first touch and he adds a difference to the rhythm and ball-carrying.

Soucek has the ability to dominate and control matches based on their tempo. He seeks to organise the unit and unbalance the opposing one. Knowing where to position himself to be at the core of everything and how much pace to provide to each action is one of the most difficult and underrated things he performs with incredible precision.

Frenkie De Jong is one of the most aesthetically pleasing midfielders you will find. With exquisite ball control, extraordinary passing range, bird-eye vision and a low centre of gravity to change direction in tight spaces, he has it all. He fixates the opponents, uses constant width, and helps the team progress vertically by finding the free man.

Frenkie de Jong is an expert at screening his backline, as seen by his interceptions and precise positioning. He focuses on defending the centre and, as a result, leads opposing attackers away from the centre using his astute positioning. In transitional defence, he can cover a vast amount of territory rapidly and is particularly adept at reading and intercepting opposing counter-attacks.

Wijnaldum has led the Netherlands’ goal-scoring column thus far in Euro 2020, with three goals. He is not a natural goal-scorer, but for his nation, he appears to have a trigger that allows him to score in bunches as in 78 appearances, the Dutchman has 25 goals under his belt.

🇳🇱 Georginio Wijnaldum, from midfield, has scored 17 goals in his last 28 games for the Netherlands. Outstanding form from an outstanding player 🔥@GWijnaldum | @OnsOranje | #EURO2020 pic.twitter.com/PczPQxEWjO

He is a completely different player when he suits up for the Oranjes. With Liverpool, his work used to go unnoticed since he was not easily classified as an offensive or defensive midfielder. With Liverpool’s dependence on full-backs and wingers, Wijnaldum appeared to be a ghost in possession since they frequently prefered to attack down the flanks. But with the Netherlands, he demonstrates exceptional ability to retain possession, play under pressure and in tight spaces, keep things ticking, and can also find the back of the net on a routine basis.

Jakub Jankto is predominantly an attacking midfielder who seeks to surge forward whenever feasible; however, unlike many other attacking midfielders, he does not look for space around the box to help create chances. Instead, he aims to help the striker by moving forward in and around the penalty box, utilising his fast feet to generate openings for himself to strike.

These fast feet, quickness, and attacking instincts also allow him to play as a winger, as he has in the group stages, which is complemented by his exceptional ability to deliver pinpoint crosses. He is a fantastic dribbler with a strong left feet who can whittle past opposition defenders and force them into awkward situations.

Patrick Schick has been his country’s savior at Euro 2020, scoring all three of their goals and carrying the team to the round of 16 on his shoulders. The 25-year-old is a complete forward with a left foot right out of the top drawer, as seen by his 50-yard miracle goal against Scotland.

Although he does not excel much in technical aspects of the game, his instincts inside the opposing penalty box are deadly. Going into the match against the Netherlands, he’ll want to capitalise on any goal-scoring opportunity that comes his way, as he has in the past.

Memphis Depay is the talisman for this Dutch squad and has consistently proven decisive for his nation. He belongs to the breed of the all-around forwards. He always offers support to his teammates, links up well with anyone around him, can speed up each attack through his technique in apparent slow-motion, and has that power of attraction to drag defenders and generate spaces for others.

He uses his trademark swagger, confidence, and stimulating actions to showcase his creativity with every touch. He adds dynamism with his pausa. He also feels at ease when pressured from behind, thanks to his strong lower body, which allows him to resist knocks and safeguard the ball. With two goals and one assist already to his name, the 27-year-old is only getting started and has bigger goals to accomplish with the Netherlands going ahead in the tournament.