THE BEST XI FROM THE EURO 2020 GROUP STAGES - LUKAKU, LOCATELLI, HRADECKY AND MORE

Euro 2020 got off to a slow start but the group stages soon picked up pace with teams scraping to make their way into the round of 16. Things came to a crescendo on the last day of the group stage which saw 14 goals shipped in across just four matches.

With just three games to showcase yourself, there is little room for error in the group stage at any international tournament. Under such immense pressure, some players rise to the challenge while some collapse. The Euros were no different.

Which stars shined the brightest in the Euro group stage? FootTheBall brings to you the best eleven from the Euro 2020 group stages based on individual performance and overall impact on the side and results.

The only player in the lineup whose team did not qualify for the knockouts, Hradecky was invincible in the Finnish goal at times. This was Finland’s first appearance at a major tournament and they only missed out on qualification to the Round of 16 on goal difference. 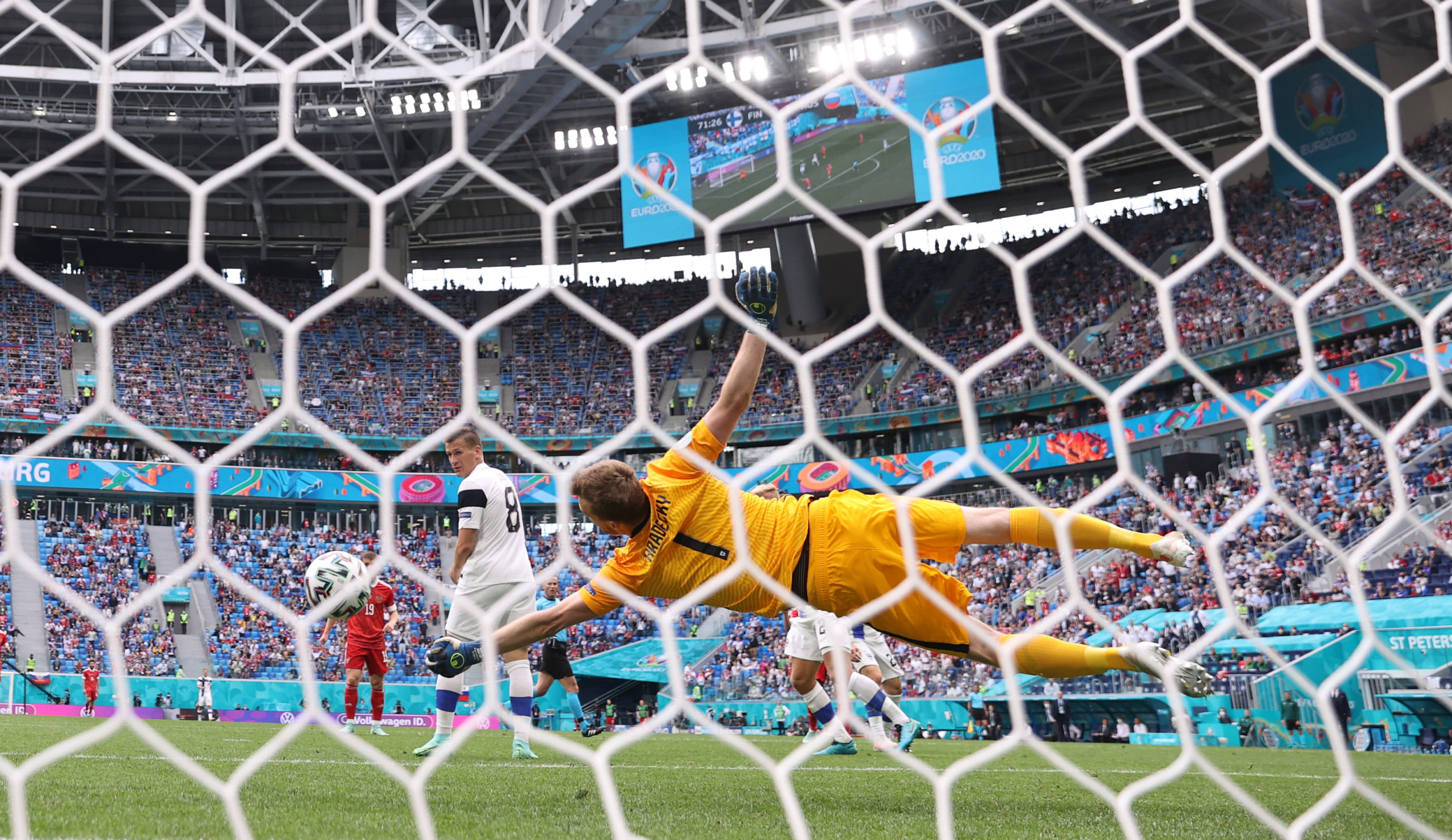 This was in no small part down to Hradecky. The Bayer Leverkusen man saved a penalty in the opener to keep a clean sheet as Finland won on a bittersweet evening against Denmark. He followed that up with exceptional performances against Russia and Belgium, even though Suomi lost both those games. Hradecky did his best and conceding only three goals for one of the lowest ranked sides in the tournament is no mean feat.

There is something very aesthetically and ideologically pleasing about a full-back bombing forward with complete abandon for positional play or defensive nous. PSV Eindhoven right back Dumfries typified that style of play for Netherlands as they surprised everyone with their gung-ho approach.

Dumfries got the winner in the 85th minute against Ukraine in Oranje’s opener before getting on the scoresheet again against Austria. He has been the surprise package of the tournament so far and the Dutch have a favourable draw – Dumfries could lead their charge towards an unlikely final place.

Removing the perpetual apocalyptic lens of England fans, we might see that they have perhaps not done all that bad. They finished top of the group and are yet to concede a goal and Manchester City’s Stones has been the only perpetual presence in England’s back four across their three group games. 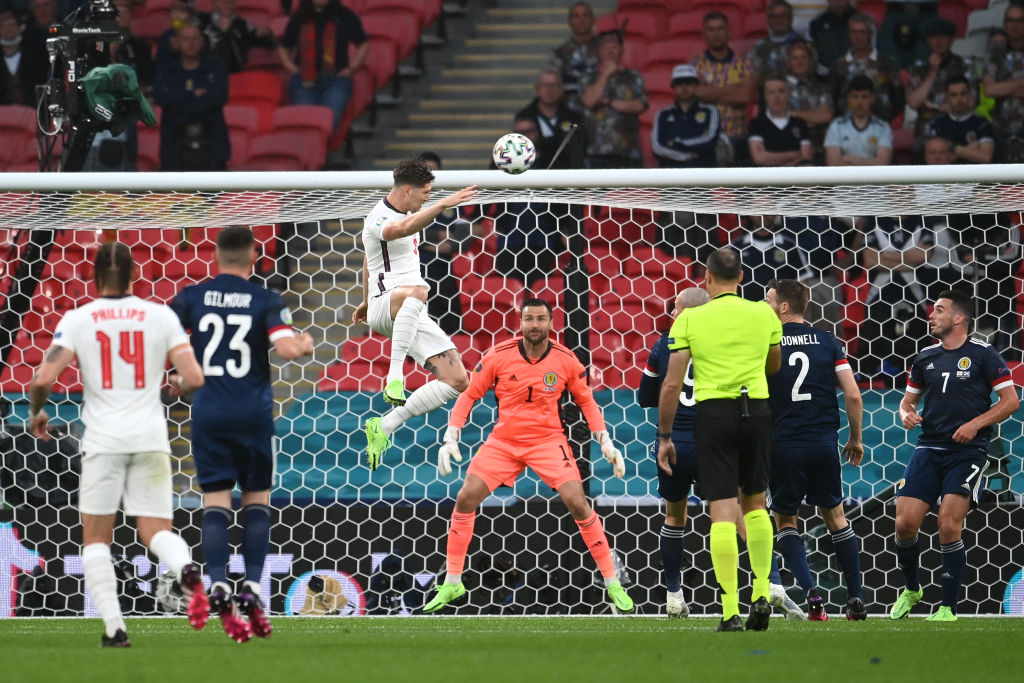 John Stones struck the post from a header against Scotland (Courtesy: Enagland NT/Twitter)

Stones has looked composed on the ball and has ensured that things are comfortable for Jordan Pickford in the English goal, marshalling the defence well in Harry Maguire’s absence. He has also been a threat at set-pieces and has progressed play well for England. With Maguire coming back from injury, the English defence looks solid. It remains to be seen whether they can keep it up against more talented opposition in the knockouts.

Roberto Mancini’s Italy may have departed from the Catenaccio identity of old but their defence is as stable as ever. Italy are the only team apart from England yet to concede in the Euros. In fact, they have not conceded a single goal in their last 11 matches across competitions and at the heart of that run has been Juventus stalwart Leo Bonucci.

Bonucci and Chiellini continue to respond in the moment of truth pic.twitter.com/NJKxfMNYy2

Italy goalkeeper Gigi Donnarumma might as well have ordered a coffee and cigarette with Bonucci and co. enforcing complete lockdown. The Italians have gone from underdogs to major favourites over the group stage and if they are to fulfill their potential, their defence will have to keep up the good work.

When you play as a wing-back at Gian Piero Gasperini’s Atalanta, you need to have certain attributes – relentless running, exceptional crossing and smart finishing. Robin Gosens, Hans Hateboer and Timothy Castagne have all come through that school and the latest to breakthrough is Joakim Maehle.

The Dane got a decisive fourth goal against Russia on matchday three as Denmark qualified despite losing their first two matches. Maehle was electric on the left wing throughout the group stages. Next up he faces Gareth Bale but you can be assured that Maehle’s priority will still be to attack first and worry about the Welshman later.

Despite being used to a more free and advanced role for Real Madrid, Modric’s extremely high levels do not drop when made to play a deeper position for Croatia. The national team captain’s exceptional outside-of-the-foot strike against Scotland made him both the youngest and oldest scorer at Euros for Croatia. 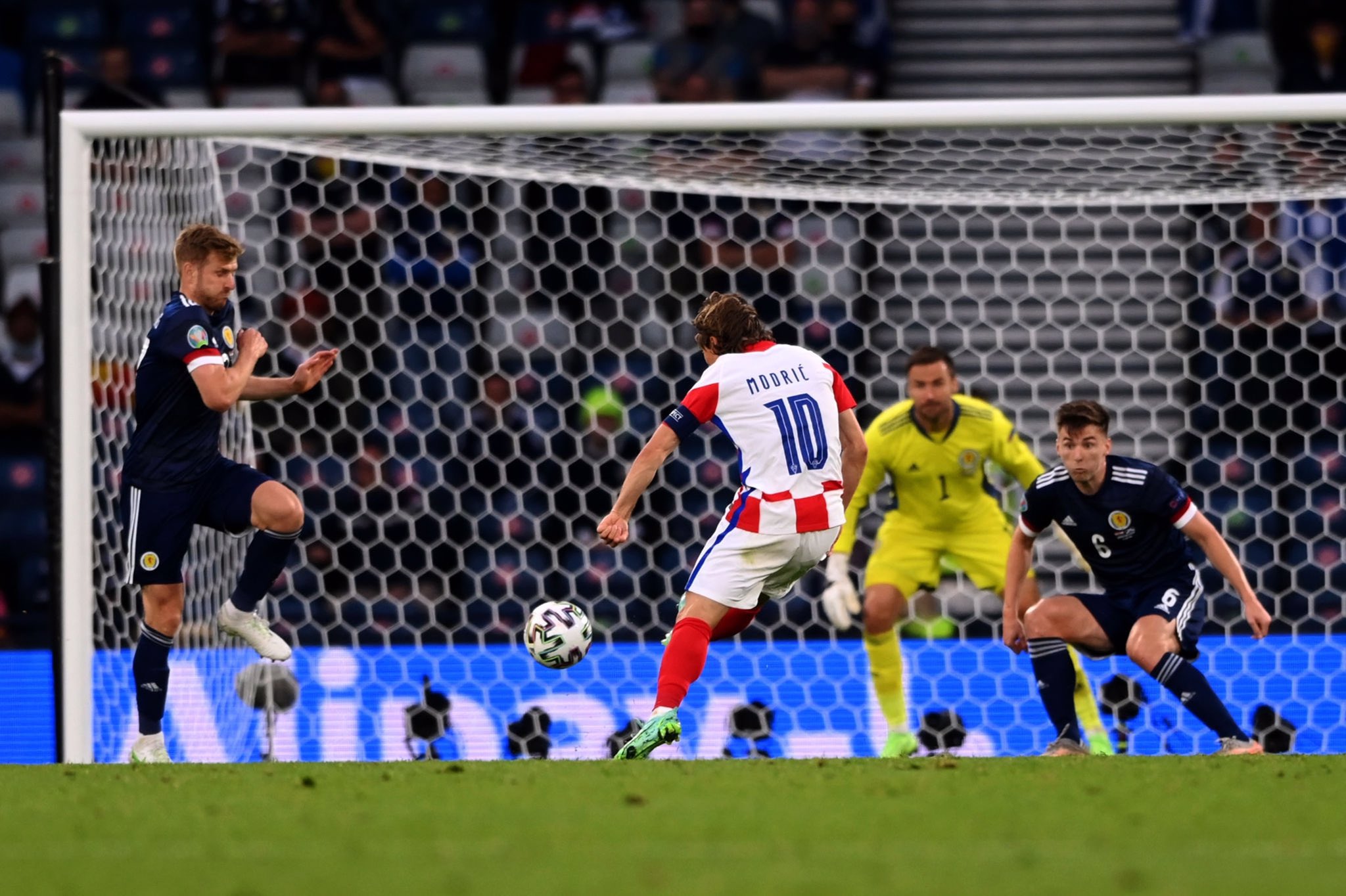 The midfielder has once again shown at the Euros how he is the perfect modern midfielder – a matched blend of technical skill, flair, and unending energy. For a long time the question for Croatia has been what after Luka but perhaps it is better to just sit back and enjoy while he is still putting on a show.

Speaking of perfect modern midfielders, Paul Pogba has turned it up for France once more at the big stage. Coming off the back of a very good individual season, the Manchester United midfielder has been the inspiration for a misfiring France, dictating play in possession and being disciplined without it.

Paul Pogba attempted more through balls (6) than any other player during the #EURO2020 group stage.

Keep an eye on them in the knockout rounds. 🏹 pic.twitter.com/bo2vtRyebD

Pogba playing a through ball to Kylian Mbappe in behind the defence is a scary sight and when the midfielder is pinging them with inch-perfect precision, it does not matter that France aren’t in top-form. He was unlikely not to get a goal himself against Portugal, with Rui Patricio saving brilliantly from his 30-yard strike. If Pogba can keep this level up throughout the knockouts, France can easily find themselves in the final come July 11.

Roberto Mancini has a very pleasant headache on his hands now for the Round of 16 clash. Marco Veratti is fit again but the performances of Sassuolo’s Locatelli have made him undroppable. The Italian boss now has to pick between Barella, Jorginho or Locatelli to make way for Veratti who remains his best midfielder.

Locatelli impressed in the opener against Turkey but somewhat lacked the final output. He corrected that in the second match, grabbing a brace against Switzerland. Locatelli was rested against Wales – perhaps a sign that he will not be the one making way for Veratti. A dynamic and graceful dribbler, Locatelli might just be the find of the tournament for a lot of people – especially if Italy go deep in the Euros.

It is perhaps Swedish, or rather Scandinavian, heritage to find a talisman for the national team and latch all their hopes to them. With no heir in sight, Zlatan Ibrahimovic decided to do Sweden the favour of becoming that talisman again before an injury cut down his joyous return. Up stepped Emil Forsberg. The Leipzig star had an average domestic season but he has shown the full extent of his skill set as Sweden won Group E.

81 – Scored after just 81 seconds, Emil Forsberg's opener for Sweden against Poland is the second-fastest goal ever scored from the start of a European Championship match, after Dmitry Kirichenko for Russia v Greece in 2004 (65 seconds). Quickfire. pic.twitter.com/NTTGBBbnwp

In the first match he was disciplined, keeping his creativity in check as his side blocked out much-fancied Spain. In the second, he kept his nerve to score the only goal of the match from the penalty spot against Slovakia. And on the final matchday, his brace ensured that Sweden finished top of the group. They now get to play the worst third placed team – Ukraine and one would expect Forsberg to lead his team through to the quarters.

On paper Kai Havertz may just have two goals but in truth he should have four, at least. Fresh off the back of a winner in the Champions League final, Havertz has been the most consistent attacking force for a fluctuating Germany side. Joachim Loew’s side nearly got knocked out at the group stage on the final day by Hungary but managed to scrape through thanks to a 2-2 draw.

The Chelsea striker’s movement has been key in creating opportunities for Germany and perhaps he would be disappointed about not having put more to bed. His versatility has also helped Loew fit in his best players into the starting eleven. Havertz will need to be at his best once more when up against a staunch England side.

Inter Milan striker Lukaku has spent a large part of his career proving people wrong. However, the last year and a half have put it beyond doubt that he is amongst the very best forwards in world football. The Belgian has three goals in three games and has been his side’s leader in the absence of Eden Hazard, Kevin De Bruyne and Axel Witsel.

Lukaku’s all-round play shines through for Belgium when the team’s style is more suited to his strengths. He looks like a man on a mission and with defending champions Portugal up next, you would not want to bet against him getting on the scoresheet again.