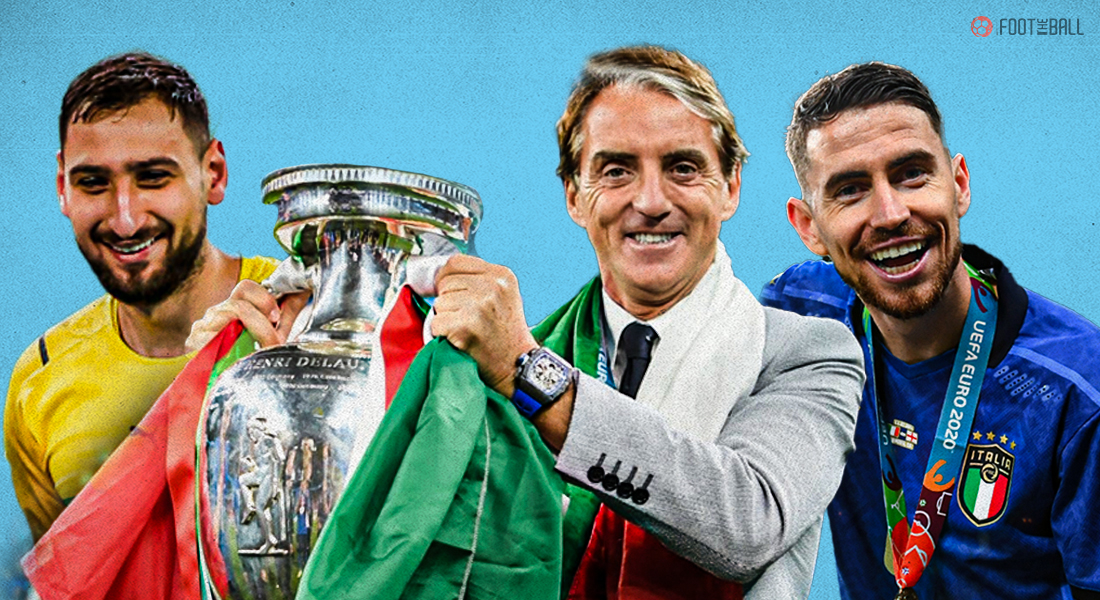 Wembley, until the 67th minute, sang loud that the trophy was coming home after 55 years but at the end of the penalty shootout it was the 5,000 Italians, along with Leonardo Bonucci, singing another rendition, “It’s coming to Rome”.

Italy were deserving winners of the tournament, and it was a testament to the grit and determination ingrained in the Italian culture that even after two of the three knockout games had gone to extra-time, they were equally energetic in the final against England and went on to achieve their second European Championship, the first since 1968, after prevailing 3-2 on penalties.

They are on a 34-match unbeaten run, the second-highest after Spain and Brazil who are on 35 each and can break the record in September when they play Bulgaria and Switzerland in the FIFA World Cup qualifiers. And all of this can be attributed to the hard work of many souls but importantly one man – Roberto Mancini.

29 years ago, he sobbed on the same pitch after losing the 1992 European Cup final against FC Barcelona,  while playing for, and captaining Sampdoria. Now, he sobs with joy after leading a group of talented youngsters and experienced veterans to winning the Euros.

Every single outfield player in our squad has now made a #EURO2020 appearance.

What Mancini had created was not a team that was capable of performing at a tournament but a family that could stay along the journey and made everyone feel that they are home with everyone else. 25 of the 26 players in the squad featured in the tournament, the most for any team in the tournament, and the reason given by Mancini was truly heart-warming.

Mancini even sending Sirigu on for a few minutes in goal. His approach with this squad speaks to his own regrets as a footballer. Went to a World Cup in 1990 and didn't play. Says it's still his greatest regret that he never got to play in one.

In the crunch games too, he believed that each and every one of his squad could do a job for him when required, and this was evidently visible when he brought on Federico Bernardeschi and Bryan Cristante, both of whom have had scarce involvement in the tournament, in the second half against England in the final.

But coupled with the manager’s ability to bring the players together, it was his tactical nous on the pitch along with the help of the veterans on the pitch that helped Italy achieve greatness on Sunday. Since his return from injury, Marco Verratti had been a sure starter for Mancini alongside the metronomic Jorginho. Marco Verratti and Jorginho were splendid for Italy at the base of the midfield in Euro 2020. (Image Courtesy: Azzurri / Twitter)

In the 4-3-3, they were able to dictate the play from the middle, while freeing the likes of Lorenzo Insigne, Federico Chiesa, Ciro Immobile, and Domenico Berardi to run riot up the field and excel in the attacking areas. Both these midfielders were helped by the presence of the longstanding pair of Giorgio Chiellini and Leonardo Bonucci, who have been true leaders for a young bunch of talented defenders from across Italy.

Also, Mancini’s decisions to bench players such as Manuel Locatelli and Berardi, when both had a stupendous group stage, for Marco Verratti and Federico Chiesa displayed his bravery as they would have been big decisions if it faltered. But as the saying goes, “Fortune favours the brave”, it paid off. Verratti was one of the best midfielders in the knockout stage while Chiesa was the star performer and a late candidate for the Young Player of the Tournament award. Federico Chiesa lit the knockout stages on fire with his dazzling performances for Italy at Euro 2020. (Image Courtesy: UEFA / Website)

They had taken the hard path all through this tournament. After finishing top of their group and surviving a Round of 16 battle against Austria, Italy had to defeat the world number one, Belgium, as well as Spain, the opponents who beat them the last time they reached the final of this tournament, in 2012. All that was left was to beat England at their own home ground. They did it and they would not care how they did it.

Italy lost to Spain in the 2012 Euros, in the 2014 World Cup they did not cross the group stage. While they improved in the 2016 edition of the Euros by finishing in the quarterfinals, disaster struck in 2017, when they failed to qualify for the World Cup in Russia. Mancini came in, put out his objective: To Win Euro 2020.

He has put the Azzurri back on top as he promised when he joined. All that is left for him and his side is to conquer the world.