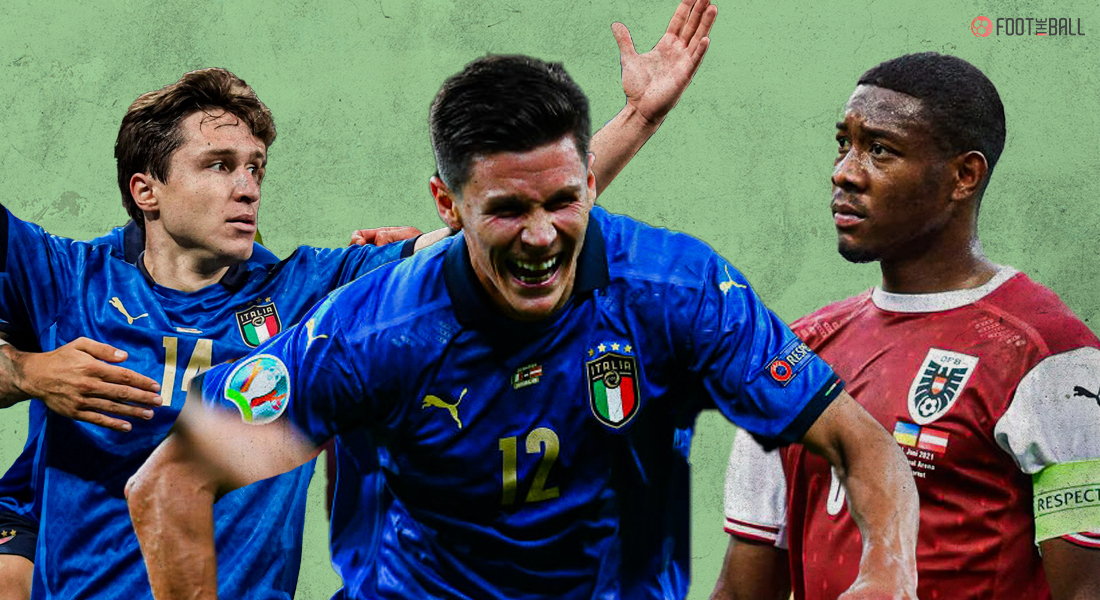 Italy scraped past a tough Austrian side to the quarter-finals of the Euros. The Azzurri had to dig deep and score two goals in extra time and end an entertaining affair 2-1 in their favor. This ugly win now brings Italy a step closer to their dear trophy while Austria have exited the tournament after an inspirational performance.

The game was a cagey end-to-end affair for 90 minutes. Arnautovic’s opener was ruled out by VAR and it prevented the first real shock of the tournament. Federico Chiesa and Matteo Pessina scored 10 minutes apart in the first period of extra time to double Italy’s advantage.

Though the Austrians scored late in the second half of the extra time but it wasn’t enough to spark a late comeback. We at FoottheBall bring you 5 things we learned from Italy vs Austria in their round of 16 clash

Italy came into the tournament without many hopes. But their strong run in the group stages have made them strong favorites for the tournament. Sparkling in attack and solid at the back they became massive favorites suddenly. They were expected to trounce Austria in their round of 16 clash.

The Azurri haven’t found the game anything close to being a walkover. Austria defended deep and struck them on the counter every now and then. Italy were shocked as Arnautovic headed Austria in front only for VAR to rule it out. The Italians stood firm to finish the game all square at 0-0 after 90 minutes.

VAR is a piece of technology that has changed in more ways than we could imagine since its inception. It was used at the 2018 World Cup for the first time and proved to be a hit. It was then made a regular across all top leagues. This edition of the Euros marked its debut at the tournament.

VAR was run smoothly throughout the group stages and there were no game-changers as such. In today’s game, it made its biggest impact. Austria were potent on the break and challenged Italy. On such occasion, Stefan Lainer found David Alaba with a cross. Alaba nodded it across the goal for Arnautovic and the striker glanced a header past Donnarumma. The Austrian camp were jumping with joy as they thought they pulled off a coup.

A VAR check was done and it was found that Arnautovic was off by a whisker. Italian fans celebrated the goal being ruled out like a goal they’ve scored. Modern football for you eh?

There is no need to mention again and again how important are substitutions in a football game. Even UEFA felt that they needed to continue the five substitute rule following a condensed season. When you’re given the opportunity you must use it like Roberto Mancini.

Mancini saw things weren’t going in his side’s favor and turned to the bench immediately. He threw on Locatelli and Pessina in the 67th minute to stabilize the midfield. Chiesa and Belotti were summoned in the 84th minute. Incredibly this proved to be a masterstroke as both super subs Chiesa and Pessina scored to give Italy the lead.

Franco Foda got it horribly wrong by holding his subs back. His first substitution was in the 90th minute. It was a forced one due to an injury. He only opted to sub one of his players after Italy scored their first goal. Sasa Kalajdzic who replaced Arnautovic scored Austria’s consolation. Foda was left to regret his decision of not trusting his bench earlier.

4) FAVORITES IS JUST A TAG

Italy’s impressive performance in the group stages was well noted around the world. They weren’t allowed to work in silence as they were at the heart of a title favorite talk. The talk maybe got to their heads as Italy failed to click today.

🔥 12 consecutive wins for the Azzurri

Their attacking light Ciro Immobile had a quiet game. Though he hit the post from outside the box he had an unusually quiet game. Even Berardi looked jaded on the night. Their defence which hasn’t conceded a single goal in the group stages has looked shaky throughout the match. Capitalizing on this Kalajdzic scored from a corner. They’re not invincible in the goal anymore.

This game must’ve provided a strong reality check to Italy. Favorites is nothing but an extra tag you carry on your back and often crumble under its weight. They need to tread carefully now if they are to progress further in the tournament.

We all know what happened when Austria were branded as the dark horses last time. They lost all three games and were kicked out of the group stages in 2016. Four years later Austria were again chosen as the dark horses. This time led by star men David Alaba, Marcel Sabitzer and Marko Arnautovic they were better.

They won two of their three possible group stage games earlier. They only lost to a superior Netherlands side. A clash with Italy provided them with a chance to prove their darkhorse status. The Alps nation started the game well and went toe to toe with the Azzurri. They have even put the ball in the back of the net only for a VAR check to cancel it.

They lost their discipline in extra time as the Italians scored twice. However, Austria must be credited for putting up an inspirational display ever since against Italy. They scored a goal and pushed deep for an equalizer. Taking positive experiences from this tournament they’d now focus on the 2022 world cup.