MATCH DECIDERS IN ITALY VS SPAIN 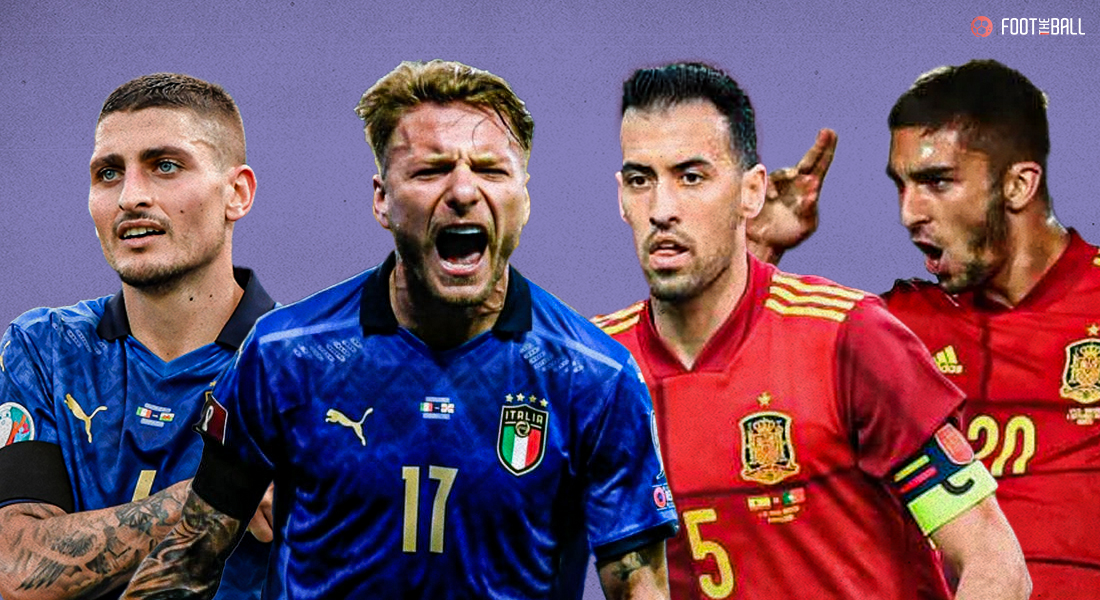 Euro 2020 is in the last stages of the tournament with the semifinal fixtures already decided and ready to provide unmatchable entertainment to the viewers. The first semi-final is to be played between Italy and Spain on Tuesday, July 6 at the Wembley Stadium in London where two master tacticians and successful managers at the club level will combat to reach their first major international final.

Needless to say, it is going to be a tactical onslaught from both sides and as knockouts are likely to be, the result will be vastly dependent on individual battles in key positions. Such evenly matched games need one moment of magic from that star player to get the decision in his side’s favour, be it Andres Iniesta’s goal in the extra time against the Netherlands in the 2010 World Cup final or Iker Casillas’ two brilliant penalty saves in the Euro 2008 quarterfinals against Italy.

Italy and Spain share a great footballing history and are two of the biggest footballing entities in Europe. However, the two sides haven’t been at their best in recent years and this will be the perfect opportunity for them to bring themselves back to the top.

Who will end up with the 🏆?#EURO2020 pic.twitter.com/CndBEpg3nF

As Roberto Mancini and Luis Enrique prepare their teams for what is expected to be a draining yet enthralling fixture, we, at FootTheBall, pick out and analyse three key matchups that can decide the outcome in either side’s favour —

Firstly, let’s take a look at Italy’s attacking threats and the man who leads the charge for the Azzurri — Ciro Immobile. The 31-year old striker is the center of all Italian attacks and is one of the most trusted poachers in Mancini’s squad. He started all games for Italy at this year’s Euros bar one dead rubber fixture against Wales and provided two goals and an assist in four games.

His direct challenge in the semi-final will be to get past the Premier League winner with Manchester City and a defensive wall at the back, Aymeric Laporte. The France-born center-back changed nationalities over the lack of opportunities and has helped Spain get to the semifinals. Despite a small bump against Croatia, Laporte has had a good debut tournament so far.

The 27-year old defender even got on the scoresheet against Slovakia and is known for his brilliant ability on the ball. He is fairly press-resistant and likes to get on the ball and move it around the pitch, helping Spain keep more of the possession in all of their games. He registered a 96% passing accuracy, completing more than 500 passes in five games.

It is going to be an intense battle as Immobile is a quick striker with a poachers instinct that always lands him in dangerous positions. He is always on his toes with great awareness ready to press the opposition defence and exploit any slip-ups. He is also capable of long-range shooting and needs to be closed down in time.

There’s a theory about big games that says the team that dominates the midfield is the more likely to come out victorious. And if there are two names in world football who can change the game on its face, they are PSG’s Marco Verratti and Barcelona’s Sergio Busquets. Both midfielders tend to get on the ball and dictate the tempo of the game, run up and down the bitch and help their teams in both attack and defence.

Verratti missed out on the opening two games due to an injury but has been the engine of the team ever since his return, creating 12 goalscoring opportunities in the three games played. The 28-year old midfielder is a great passer of the ball and has a great partnership with Italian teammates Jorginho and Nicolo Barella. Roberto Mancini would want him to be at his usual best against the historic rivals.

Sergio Busquets has been one of the most highly-rated midfielders in the world ever since his debut in 2008. The Barcelona star is a very hard-working player who thrives on disrupting the opponent’s attacks with his gifted reading of the game and calculative tackling and interceptions. He is also the key to many attacking transitions with his vision and long-range passing. The 6’2” midfielder is also adept in the air and keeps his opposite number under his shadows. The 32-year old made 10 tackles and 19 ball recoveries, which is a very good number considering Spain has dominated the ball in most games.

Marco Verratti, on the other hand, is a quick and agile playmaker who can find those pockets of spaces in the midfield, turn around and carry the ball forward and his short structure allows him to dribble past opponents before unleashing a juicy final ball for the strikers. Verratti has registered two assists in three games, with a passing accuracy of 96%. He also works hard off the ball and helps his team recover, regroup and restart the attacks. The PSG midfielder made 15 tackles and 18 ball recoveries in just three games.

There will be much responsibility and hopes on their shoulders to carry their teams into the final of Euro 2020.

Lastly, we discuss Spain’s key attacking threat and the fact that there won’t be the first-choice man for Italy to counter him.

The Spanish youngster Ferran Torres who plays for Manchester City has been crucial to Luis Enrique’s attacking outputs in the tournament with his speed, creativity, technical ability, and brilliant close control even when dribbling at a high pace. This allows him to take on defenders and exploit the spaces against sides that push their fullbacks forward. He is a highly athletic forward who usually operates from the right flank but can also play from the center as well as the left.

Ferrán Torres has been directly involved in 3 goals in 4 #EURO2020 games — scoring 2 and assisting 1.

Roberto Mancini will be certainly wondering about the 21-year old winger and ways to stop him in his stride considering the absence of star full-back Leonardo Spinazzola. The 28-year old fullback is out of the tournament and maybe for the whole of next year with a torn Achilles and will be replaced by Chelsea’s Emerson Palmieri whose primary responsibility will be to support the veteran defensive duo of Leonardo Bonucci and Giorgio Chiellini in defending Spain’s quick young forwards like Torres, Daniel Olmo, and Mikel Oyarzabal.

Torres has already found the net twice in the tournament so far and Luis Enrique will have his hopes pinned on the Premier League winner to become the attacking menace yet again. His opponent, the 26-year old left-back Emerson is also a technically gifted player who is known for his offensive capabilities as well as his physicality.

It will be an interesting matchup to watch as both Italy and Spain use the flanks to their advantage and tend to attack from the wide areas with all their might.