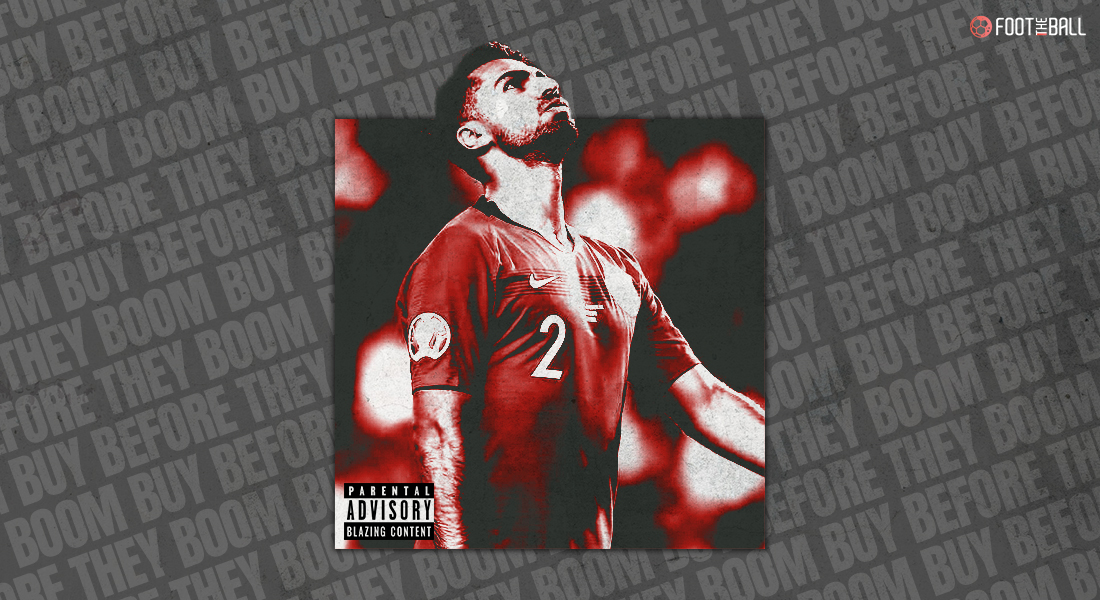 With the European Championships almost set to begin, attention has turned to so many of the top players on display. The favourites will go head-to-head with the underdogs as the tournament moves all across Europe. Group A will be the first to kick things off with Turkey meeting Italy in the opening encounter. The Turks are being pitted to be dark horses this year, and it is easy to see why.

They have a healthy mix of established stars and old heads, including their captain Burak Yilmaz. However, this piece is not about the 35-year-old. FootTheBall will look at his teammate at club and country who is set to explode on the international scene. It is, of course, Mehmet Zeki Celik and why he will boom this summer.

WHO IS MEHMET ZEKI CELIK?

Zeki Celik is the right-back at French club Lille who were recently crowned surprise champions of Ligue 1. The 24-year-old was ever-present in the campaign, making 29 appearances. Having started his career in his native Turkey, Zeki Celik was playing for second division club Istanbulspor till 2018. He left his home country and signed for Les Dogues for whom he has featured over 100 times.

3 Points & 1 Goal ⚽ in my 100th match for @losclive
Proud of this team!
The countdown continues ⚡
3 to go ➡️🏆#DoguesJusquAuBout pic.twitter.com/obvzshPTiO

Zeki Celik has developed into one of the key cogs for both club and the Turkish national team. Along with Yilmaz and Yusuf Yazici, he formed the trio of Turks to fire Lille to an improbable league title. The 2020-21 season was also the most fruitful of his career from a defensive point of view.

He had four goals and two assists across all competitions, while also being a defensive behemoth who helped Lille in keeping 21 clean sheets. His stock is only set to rise further with time even if a transfer out of his current club is very much in the offing this summer.

Lille are one of the few teams who play with a traditional 4-4-2 formation. This means that Zeki Celik’s role of right-back does not involve too much attacking runs, since he has to stay alert in behind. Despite such a role, Zeki Celik’s three goals in Ligue 1 came from an xG of 0.50 which shows how much he has improved that aspect of his game. Where the fullback really shines is, however, his defensive prowess.

This season, he has shown improvement in blocks/90 minutes (0.23 from 0.17), interceptions P90 (1.43 from 1.13), and tackles won P90 (1.24 from 1.22). Zeki Celik has also emerged to be a strong vocal presence on the pitch in making sure the shape of the team stays compact on the pitch. His control on the ball and ability to find his teammates has gotten better during his stay, having completed 52% of his dribbles and 0.79 per match.

Zeki Celik’s passing accuracy of 79% with 39.3 per match shows his influence on both sides of the pitch. When it comes to closing down attacks and players, he has shown his extreme adeptness time and again. His ability to put pressure and make successful tackles on his opponents ranks him among the the top 10% and 17% for each metric respectively of all full-backs across Europe.

Though he is not the most attack-minded in his game right now, his strong performances over his stay at Lille have shown that he can mix it with the best of them. The French top-flight is often derided for not being competitive enough due to PSG’s domination of the league. That perception has been loudly broken this term and Zeki Celik was a big reason why this was possible.

There has been a steady influx of Turkish talent across the continent over the last few years. Names like Merih Demiral, Hakan Calhanoglu, Caglar Soyuncu, Cengiz Under and of course Yazici have been top players at their respective clubs. The latest name to be added to that list will be Zeki Celikc who will be making his major international competition bow.

If he is able to keep up his excellent form at the Euros, there will no doubt be offers coming for the fullback. Zeki Celik will need to provide the stability and levelheadedness at the back if Turkey are to succeed well.

All set after the final preparations, keep on having faith in us 🇹🇷 @MilliTakimlar #BizimÇocuklar #Euro2020 pic.twitter.com/yIS1AzjOmL

His panache for getting forward and being able to close down opposition attacks quickly will be a key asset for Senol Gunes’ side. Strong in the air, never afraid of a hard challenge, and supreme confidence on the ball are the key facets of his game which will be on full display this summer.

Turkey are drawn alongside Italy, Wales, and Switzerland in one of the harder groups to call. Zeki Celik will be the first-choice starter for his side. His contribution across the pitch will come in handy if Turkey are to make a deep run into the competition. All three of their opponents have silky, skilful players who will need to be handled carefully.

They have a good chance of qualifying for the knockout rounds and the famed Turkish spirit of never giving up will be on show. If they manage to win their opening encounter and improve further on, Zeki Celk will be key in providing support for the team as a whole.

To no one’s surprise, Zeki Celik is already being linked with a whole host of top clubs. In England, his services are being sought for by Arsenal, Tottenham, Manchester United. The Gunners are in need of a right-back after reports of Hector Bellerin edging closer to an exit.

Spurs have had unconvincing performances from their own fullbacks of Serge Aurier and Matt Doherty while the Red Devils are looking for a challenger to Aaron Wan-Bissaka. Even Inter could be in the fray for the player if their star man Achraf Hakimi does leave.

Whichever club he moves to, it would likely be that he’ll be the challenger to a first-team squad player instead of one of the first names on the teamsheet. Keeping this in mind, Arsenal could be an ideal landing spot. Bellerin’s departure should make the RB spot an open competition. Moreover, in Arteta’s system, the attacking onus has been from the left-hand side more often than not. This should allow Celik to slowly come along in his attacking game while being a lockdown defender.

Arsenal are interested in signing Lille right-back Zeki Celik for £13m, who is also being looked at by Tottenham and Manchester United.

Valued at around £13-15 million, Zeki Celik has two years left on his contract though it is increasingly unlikely that Lille will be able to keep him. Les Dogues operate on a model of buy cheap, sell high and should a good bid arrive, it will be too much to resist. No matter which club gets the 24-year-old, he will have an instant impact for his side due to his determination to succeed.