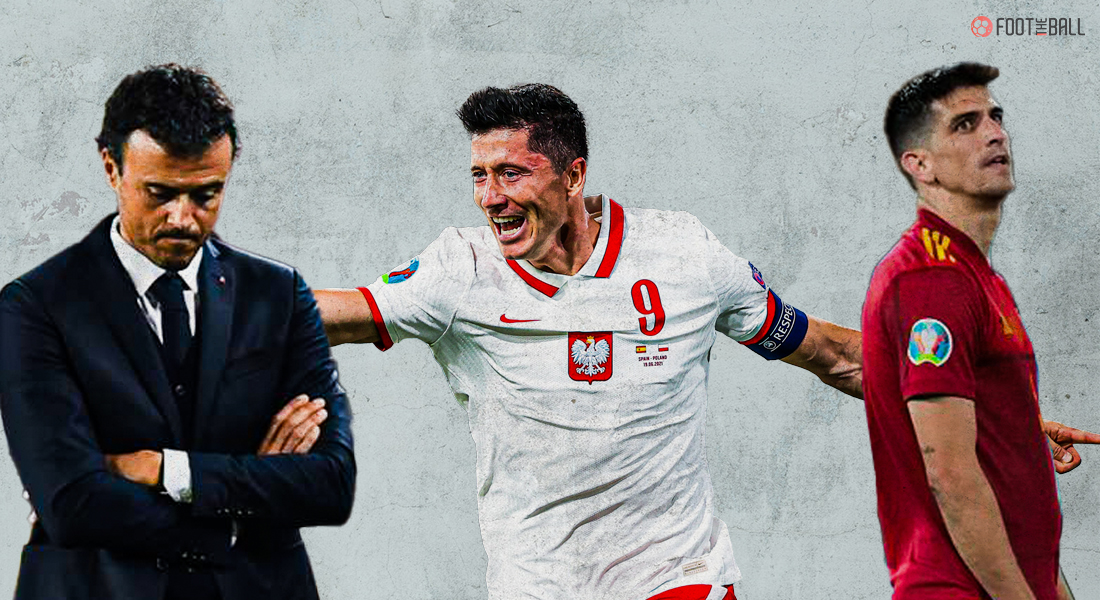 After a sparkling, vivacious, and dazzling set of ‘Group of Death’ matches came to a close, all eyes turned to Seville where the 2012 European champions Spain faced a hungry Poland side.

Spain’s revival started with a stalemate at Sweden after tons of questions poured in on Luis Enrique’s managerial skills. But the monarch failed to prove himself against Robert Lewandowski’s goal-hungry Poland owing to a stalemate at Seville.

With three points on the line, Spain stamped their authority in the middle of the park, something the world is already familiar with. A galaxy of deadly passes ensured Spain’s sheer dominance. Gerrard Moreno’s instalment in the Spanish frontline ensured the Polish defenders chased shadows for most parts of the game. A scintillating run from the left and a beautiful pass to Morata earned Enrique’s team their first goal this summer. Morata turned in Moreno’s ball from point-blank range to guide Spain to an expected half-time lead.

Did you think this was in? 🤔

Poland had a few bites at the cherry. Constantly troubling the Spanish backline, Lewandowski was once again a headache in Spain’s dressing room. With an electrifying run blocked by Jordi Alaba and Unai Simon’s strong left-glove stopping him from scoring, Lewandowski was starving to find the net.

And the poacher netted a perfect header in the early parts of the second half. He toppled Laporte to engineer some space to conquer the Spanish defender and proved his aerial powers. An inch-perfect cross and a mouth-watering Lewandowski header registered Poland on the scoreline.

🇪🇸🆚🇵🇱 Spain and Poland share the points in Seville

Gerrard Moreno could have given Spain the all-important lead but his penalty hit the post as Morata couldn’t fire home on the rebound. Spain soon looked tired and wrecked as they ran out of ideas. A 1-1 stalemate in Seville meant Poland’s dreams were still alive whereas Spain’s cakewalk bubble had been burst.

A stalemate against a depleted Swedish side hinted at Spain’s lack of flair and creativity at the top. The combination of Olmo, Morata, and Torres failed to capitalise on the galaxy of chances created by their magical midfield. The Spanish grandmaster tweaked the team sheet before facing Poland. Villareal’s talismanic striker, Gerrard Moreno marched into Enrique’s eleven as Torres was unfortunately benched. And the Villareal man changed the complexion of the match in just one half.

Making a few glittering touches on the edge of the box leaving a handful of defenders on the floor before making an inch-perfect pass to Morata. The Juventus poacher could have netted the ball with a blindfold on as the Polish keeper was left rooted to his spot. Although Spain’s jubilation was cut short by the linesman’s flag. The erupting Sevilla stadium turned silent for a second as Morata’s offside curse increased. But after taking help from technology, the officials found Morata onside owing to a Polish defender’s trailing left-foot.

The smashing finish earned Alvaro Morata his 20th goal in the prestigious red outfit as Spain paraded to a well-deserved advantage. VAR’s love story with Juventus’ towering forward finally came to a close as Spain carried on their 1-0 lead to the tunnel as the Polish shoulders had already dropped.

LEWA ON THE SCORE-SHEET

Bayern Munich veteran Robert Lewandowski was gruesome on the pitch. Constantly discovering pockets of space behind Aymeric Laporte and Pau Torres, Lewandowski turned out to be troublesome for Luis Enrique. And once again the magical striker weaved his spell when Poland needed his services the most. The Polish team came hunting for goals after the break frequently looking for crosses inside the box and their poachers to hunt the deliveries. Sousa’s army pressed hard for the ball and went flying into tackles in the Spanish half.

The backline in front of Unai Simon looked nervy and the Polish attackers could sniff an opportunity. Derby County winger Kamil Jozwiak pick-pocketed the ball from Spain and looked up to perfectly serve the ball on Lewandowski’s plate. A leaping Lewandowski, with a sparkle in his eyes, connected a perfect-header with the ball, trustfully defeating Unai Simon on the far-post.

An industrial tackle by Lewandowski raised a few eyebrows but the referee believed Laporte had fallen too easily. His first goal of Euro 2020 as the forward finally looked to replicate his club form with his international squad. A defeat in the first match and a scrappy draw against mighty Spain gave Poland some breathing space going into the next week’s all-important fixture against Sweden.

MORENO- HERO TO VILLAIN IN A SPLIT SECOND

Spain’s astonishing opportunity came knocking on their door when a VAR review earned La Furia Roja a pivotal penalty. Poland’s right-back had illegally brought down the magical Moreno who was guiding the Spanish ship. After the referee consulted his technical team, he overturned his decision to give a spot kick. The Yellow Submarine’s top-goalscorer stepped up to take the climacteric penalty. With three points on the line, a goal could have sealed the deal for Luis Enrique’s team ensuring a seat at the knockouts table.

The lion-hearted forward with his trademark run-up smashed the dead ball towards the left post as the ball rattled the post and landed back to the goal scorer Alvaro Morata. The poacher could only lift the ball over Scesenzy’s frame as Spain were left frustrated. After a million missed chances this was Spain’s perfect moment but they succumbed to the pressure. Morata and Moreno had a handful of chances in the last-knockings of the game but their lack of intent was on display as Luis Enrique had to share the sweets with Poland on Saturday.