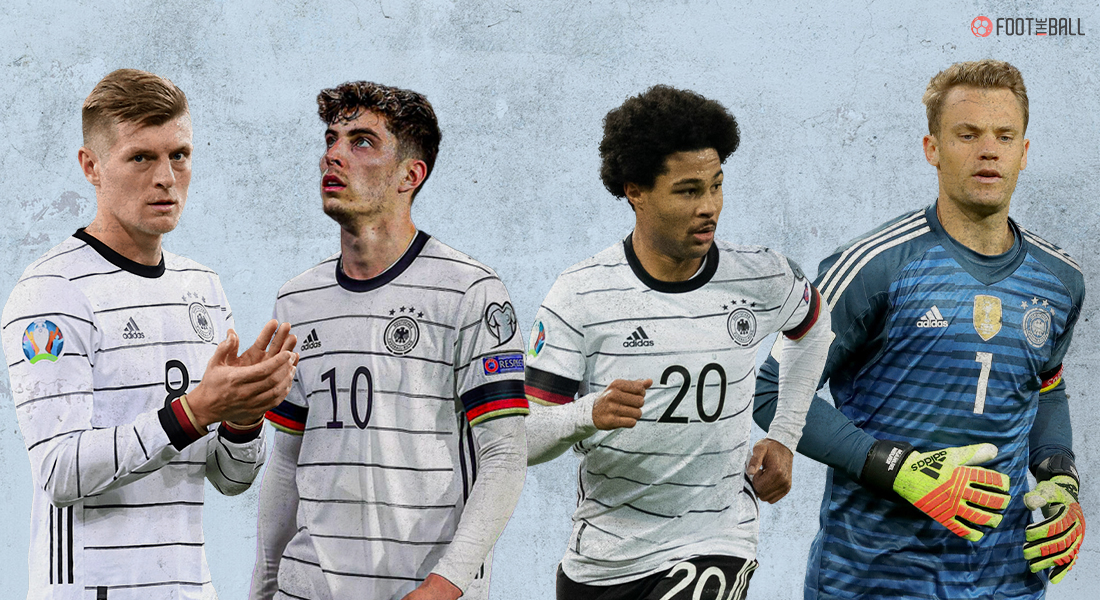 Germany is not going to win the Euros this time, it’s as simple as that! Or, is it? Germany are serial winners; they are hungry and they have the means. But for the past couple of years, the results have not been going their way. A disappointing World Cup campaign was the trigger. In what seems like an eternity, Germany is no longer the favourites. But to write them off completely would be a rookie mistake.

Good to be back with the 🇩🇪 team pic.twitter.com/5kr23aqVVq

The Germans thrive on these kinds of situations. Yes, Joachim Loew’s men lost 6-0 to Spain last November. They also lost to previously unknown North Macedonia in the World Cup qualifiers in April. However, there is still hope for the Germans. The Euro’s might well be the stage they can use to rebuild a lost cause.

Germany is pitted in the Group of Death alongside Portugal, France and Hungary. The former two are the tournament favourites and the finalists of the last edition of the Euros. FootTheBall analyses the strength and weaknesses of the German squad as the toughest test to Loew’s somewhat revamped squad prepares for the Euros.

Thomas Muller, AKA Der Bomber, has made his return to the national side. Muller is one of the most influential players in the talented Bayern Munich team. There’s a reason he is called the Raumdeuter (Space investigator). He has the unique ability to recognize space and predict outcomes before they actually happen. He is Bayern’s trump card and it is evident from his involvement in the side.

Thomas Muller: Has registered more assists (19) than any other player in Europe's top five leagues this season pic.twitter.com/1PbEg5rLBM

Muller has made more starts for Bayern Munich than any other player barring goalkeeper Manuel Neuer. He is also the highest-rated player in the team aside from the immaculate Robert Lewandowski. He has provided eighteen goals this season, more than any player in Germany.

The attacker will be deployed as a number 9 in the German frontline, responsible for creating scoring opportunities. Muller will be crucial to the build-up phase and will be the differentiator in the attacking third. The thirty-one-year-old is one of the most experienced players in the squad and is a leader on the field. Muller recognises the importance of the competition and will provide the edge when needed.

World’s best number 6, Joshua Kimmich, the precise Toni Kroos, Pep Guardiola’s İlkay Gundogan and Bayern baller Leon Goretzka. The midfield is one of the best to grace the Euro’s this summer. That too without mentioning their young stars like Jamal Musiala.

The German midfield is packed and there aren’t many that can compete against such a technically brilliant group of players. The presence of pacy wingers and Thomas Muller’s withdrawn attacking role will help the Germans produce explosive attacks. Loew’s fluid attacking systems will be at full notch if the midfielders are able to bring their best pair of boots.

Germany has produced some of the finest goalkeepers the footballing world has ever seen. Manuel Neuer and Marc-Andre ter Stegen are among the top ten goalkeepers in the world. Bernd Leno and Kevin Trapp are also available if need be. All these goalkeepers are the first choice in their respective clubs and have unique playing styles.

Manuel Neuer has long been the German first choice. Although ter- Stegen boasts the better save percentage, Neuer’s presence in the Bundesliga and his leadership capabilities give him the edge. However, it is possible to see the Barcelona goalkeeper start ahead of the Bayern No.1. Unlike many other positions on the field, this is one area Loew can rest assure.

Germany has not had the best of runs. Although they beat Latvia 7-1 in the recent international friendly, it says little about Germany’s current situation. On the back of a poor World Cup campaign, Loew was forced to rebuild his squad. Although he has experimented a lot with his sides, it doesn’t seem like he has found the perfect mix.

A series of such unfortunate events have dealt a blow to the side’s confidence. Germany is unsure of what it can achieve. The fans do not believe they can do it and a mixed run of results did not do them any favour either. They do, however, have almost all the necessary tools to spring back, but the earlier they do it, the better. Perhaps an unlikely win against France in the opening game should do the trick.

No one in Germany is sure what backline Loew will deploy at any given point. We wonder if the players themselves know what the setting will be. At times, it is five at the back, at times three, else the classic four. But what’s more disturbing is the lack of uncertainty in the personnel deployed.

🗣️ "It's an unbelievable feeling"

Ever the perfectionist, @Manuel_Neuer was frustrated not to keep a clean sheet, but pride was the overwhelming emotion as he reached 100 Germany caps ➡️ https://t.co/tvRuIowx7w#DieMannschaft pic.twitter.com/okzzip7uix

Antonio Rüdiger, Matthias Ginter, Emre Can, Niklas Sule, Lukas Klostermann, Robin Gosens, and Hummels have all been deployed in the backline. The manager has not been able to find the stability he needs from them though. There is no clear motive or presence across the defensive and this, in turn, affects the flow of the game. The Frontline of France and Portugal will eat the German defence alive if they cannot pull their act together.

There aren’t many teams in the world that can pull through a rough patch much as Germany can. The Germans are a cup team, they know what it takes to win and is prepared to do the necessary. Joachim Loew is a World Cup winner and despite what pundits or fans say, he does have the ability to pull through when needed.

Portugal and France will be no walk in the park, neither will Hungary. However, if there is any team that can pull through, it would be Germany. They know their weight, all they have to do is carry it!