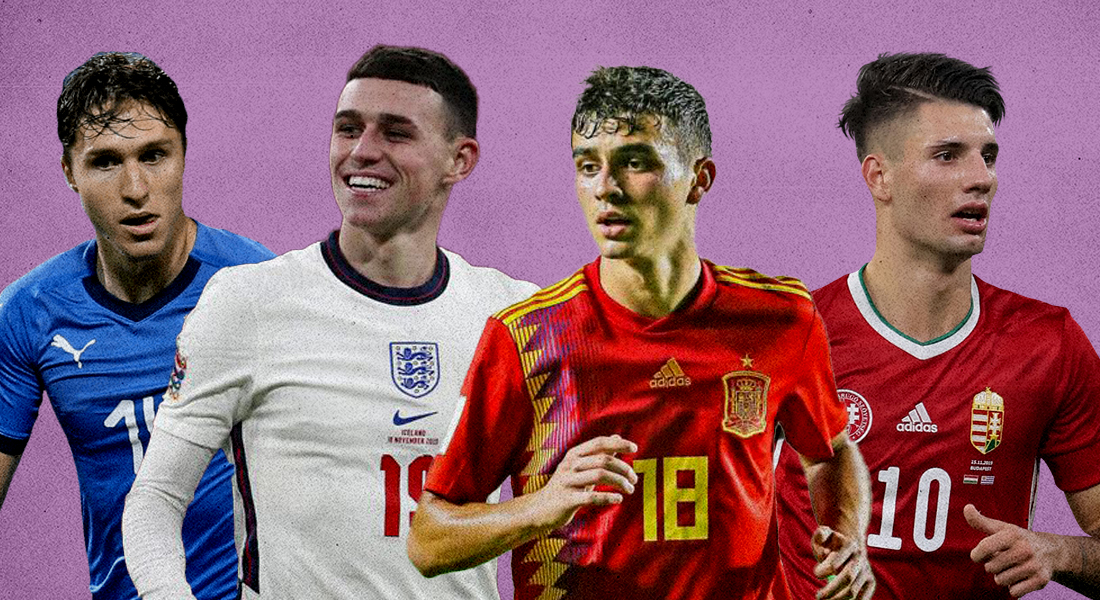 NEW ARRIVALS: 10 players for whom this Euro 2020 is their first major tournament

The Euros 2020 are set to begin on June 11 this year, after being postponed last year due to the coronavirus pandemic. All excitement peaks as the wait is finally close to being over. The excitement for fans stems from watching their favourite stars performing in the national threads. Along with the stars, there are a lot of young and lively newcomers who are looking to fulfil their dreams at Euro 2020.

Let’s take a look at 10 young stars, who have become households names for their clubs but still will be playing their first major international tournament, the EURO 2020 –

At 20-years of age, Foden is one of the brightest young talents in England as well as Europe. He rose to fame at the age of 17 when he inspired England to FIFA U-17 World Cup glory in 2017 being the highest goalscorer in the competition. His ability and performance on the pitch earned him the name ‘Stockport Iniesta’, comparing him to legendary Spanish midfielder Andres Iniesta.

An honour to be called up! Can’t wait to pull that @England shirt on!! pic.twitter.com/PFtwdemBZS

Foden has already scored and assisted 23 goals for his domestic club Manchester City this season and will be looking to extend this form with the National side too. City boss Pep Guardiola hailed Foden as the “most talented player he has seen”, and going by his experience, he has seen quite a few.

The 20-year old Hungarian playmaker caught everyone’s attention while playing for Austrian side RB Salzburg where he scored and created 61 goals from 81 matches before moving to Germany to join RB Leipzig.

Szoboszlai is known for his versatility and his ability to extract goals from multiple positions in the attacking half. Despite being out injured since December, he is one of the highest rated youngsters to play their first major international tournament this summer. His last minute winner against Iceland secured Hungary’s place in the Euro 2020, but being in possibly the toughest group or the “group of death” alongside previous winners Portugal, world champions France and and European giants Germany, Hungary’s hopes lie on Szoboszlai’s shoulders once again.

Chiesa who currently plays for the Bianconeri on loan from his boyhood club Fiorentina has been one of the few impressive performers in an otherwise disappointing season for Juventus. Chiesa with his dribbling skills, pace and crossing qualities is known for tearing apart opposition defences from either flanks. 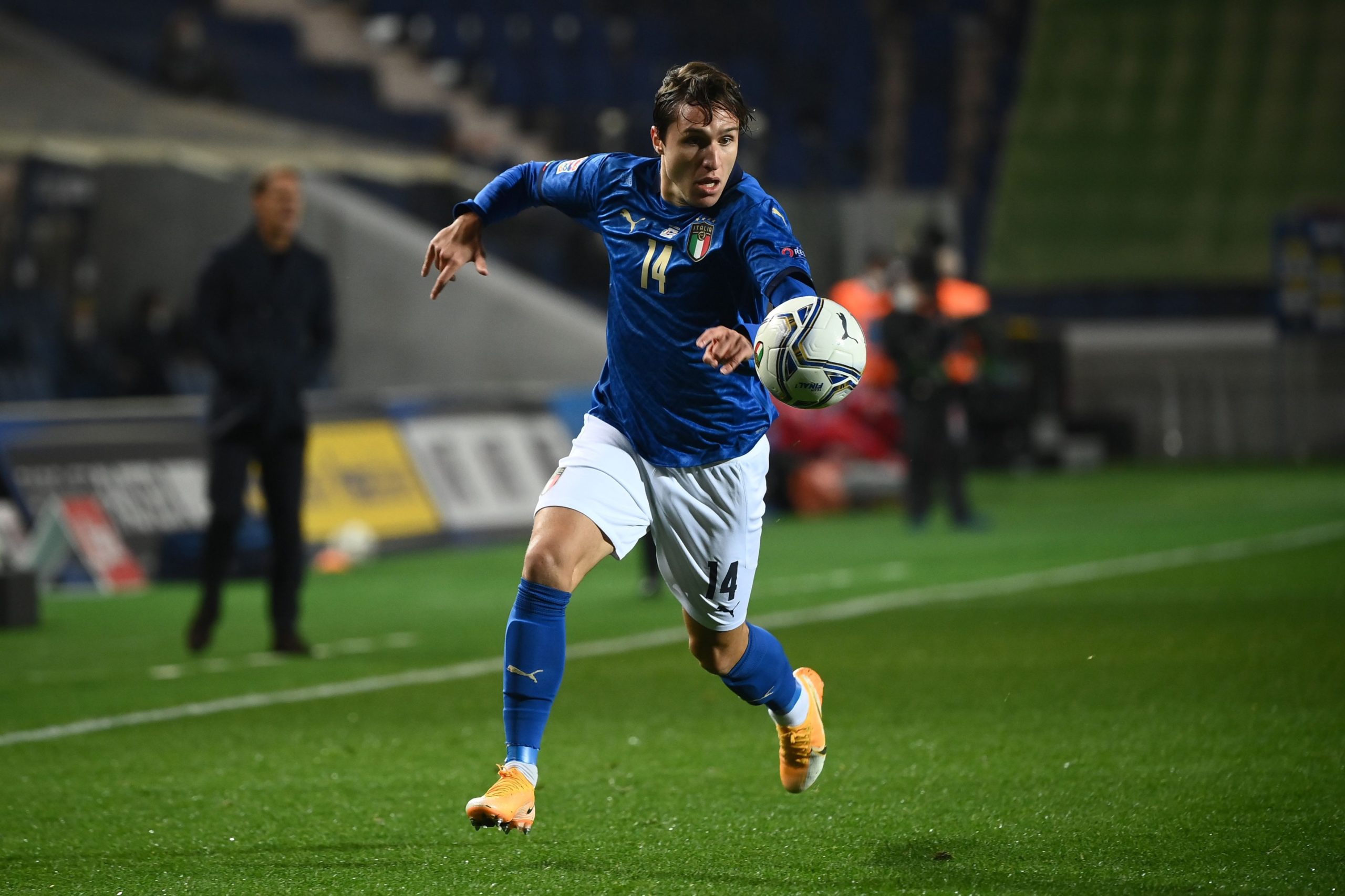 He has 22 goals and assists in 38 matches for Juve this season, who might look to acquire him on a permanent deal next year. The 23-year-old will be an important part of Roberto Mancini’s “Young Italians” in the Euro 2020 as they look to rise back to the top level again.

Pedri Lopez, or Pedri as he’s commonly known in Catalonia and the rest of Spain these days plays for Barcelona, at the age of 18 and is an important part of their long term rebuild process. He’s one of the highest rated teenagers across Europe as he continues to progress at the Catalan club.

Pedri plays in an advanced midfield role similar to club legend Andres Iniesta, who has also praised the upcoming trequartista. Spain have had their fair share of success this century, having won two Euros and a World Cup in a row but have been unsuccessful to go past the round-of-16 in any competition since 2012. The young players under coach Luis Enrique are looking to change it and Pedri will be key to their recuperation.

A 6ft 2in tall, quick midfielder who can create chances and spaces for others, dribble the ball, cut passing lanes and play as a false nine. Isn’t that all your club needs? Unfortunately, Havertz joined Chelsea last summer. Back in Germany, he was known as Alleskönner, one who can do anything . 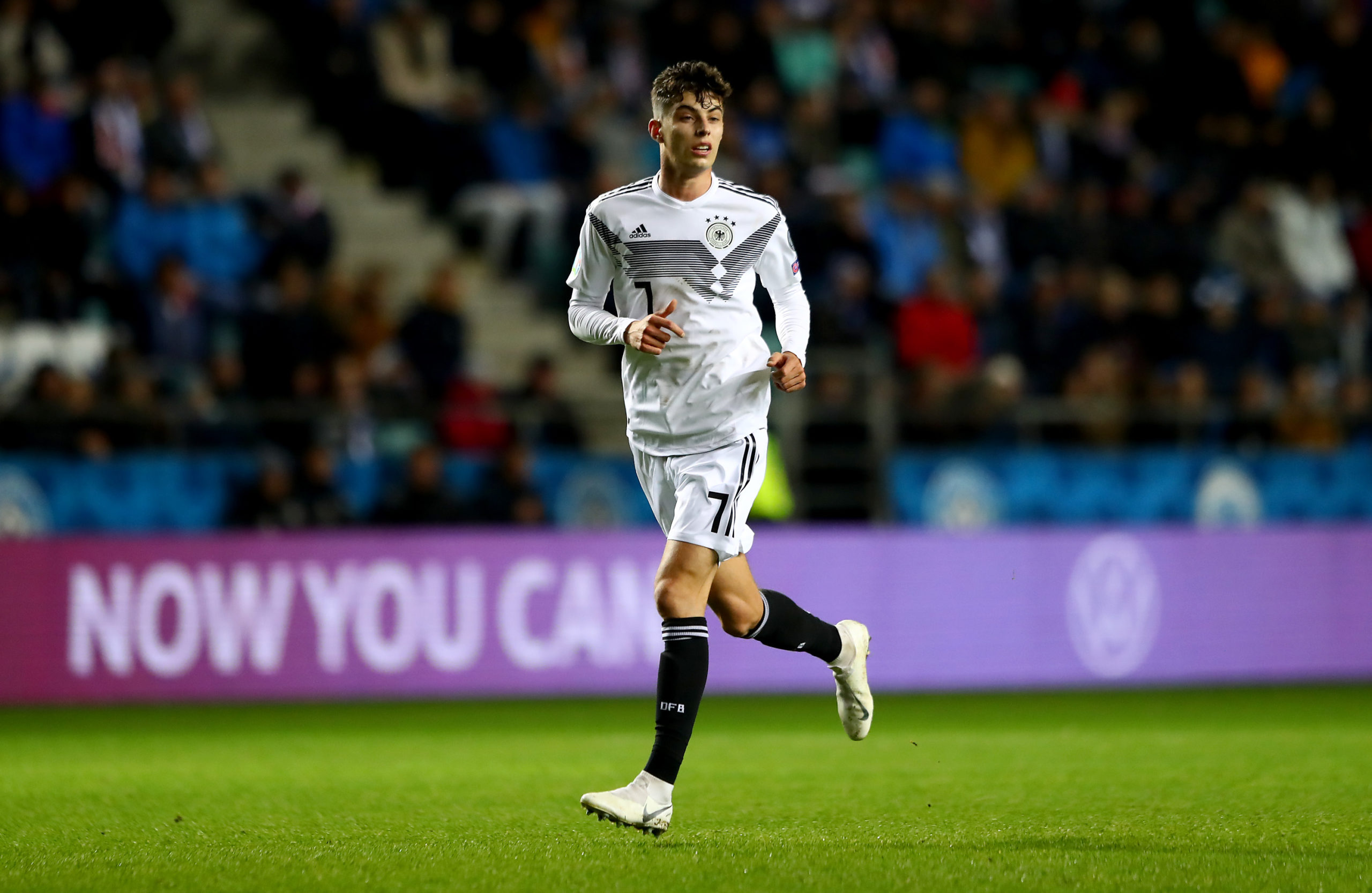 Havertz was one of the most sought after young players in Europe before he finally went to the Blues. Although the 21-year old is yet to find his feet in the English game, one can’t write off the threat he carries for Die Mannschaft as they battle France, Portugal and Hungary in the group stages of the Euros this year.

The up and coming ball playing centre back attracted interest from all over Europe before signing for European and German champions Bayern. The 22-year old frenchmen is considered one of the best CBs of his age-group with his thoughtfulness, athleticism and vision. Often termed as a “playmaking CB”, Upamecano splits defences with his beautiful right footed long balls.

Dayot Upamecano has scored for the France national team for the first time.

What a way to mark your home debut. ⚽️ pic.twitter.com/ylF5gjHnBK

Apart from his playmaking, teams across Europe are impressed with his proactiveness and decision making at such a young age. Despite having a lengthy list of central defenders such as Raphael Varane, Clement Lenglet, Presnel Kimpembe and Aymeric Laporte, Wesley Fofana, France’s manager Didier Deschamps would like to use Upamecano’s passing ability to feed lightning fast forwards such as Mbappe in the Euros.

A young French centre-back who has caught everyone’s attention with his poised defending and graceful tackling. The 22-year old Sevilla defender is known for his aerial ability and composed game-reading which goes way beyond his age and experience.

Jules Koundé has scored a Champions League goal for the first time in his career.

This kid is good. #UCL pic.twitter.com/agQqu7W6Ho

Kounde refrains from lunging into tackles and prefers to hold the attacker down by blocking his angles until there’s no space for him to go, much like the highly rated Dutch Van Dijk. He is yet to make his international debut for the senior team but with his composure and potential, his inclusion in the France squad won’t be a surprise.

The Manchester United forward came through the ranks to become a first team starter for arguably the biggest club in the world at the age of 17. Currently 19, the two-footed winger has already scored and assisted 36 goals for his club. He is known for cutting through defences with his explosive speed and his ability to find the net with any of his rocket feet.He iis surely going to be one the brightest young stars at Euro 2020.

Senior debut, a massive achievement for me and my family the journey continues ❤️ @England pic.twitter.com/nhjwkMj7Ey

He makes life difficult for defences by twisting and turning as he can find a shot from either side, this trait attracts more defenders towards him and frees up space for his teammates in the middle. Gareth Southgate has been monitoring his progress under Solksjaer and he’s most likely to make it to the England squad for the Euros.

De ligt, 21, has been defined as the most complete defender there is in world football at this time. The Dutch centre back currently plays for Juventus but caught everyone’s attention as an 18-year old captain of AFC Ajax who led his team to a Champions League semi final, knocking out Juventus and Real Madrid on the way. 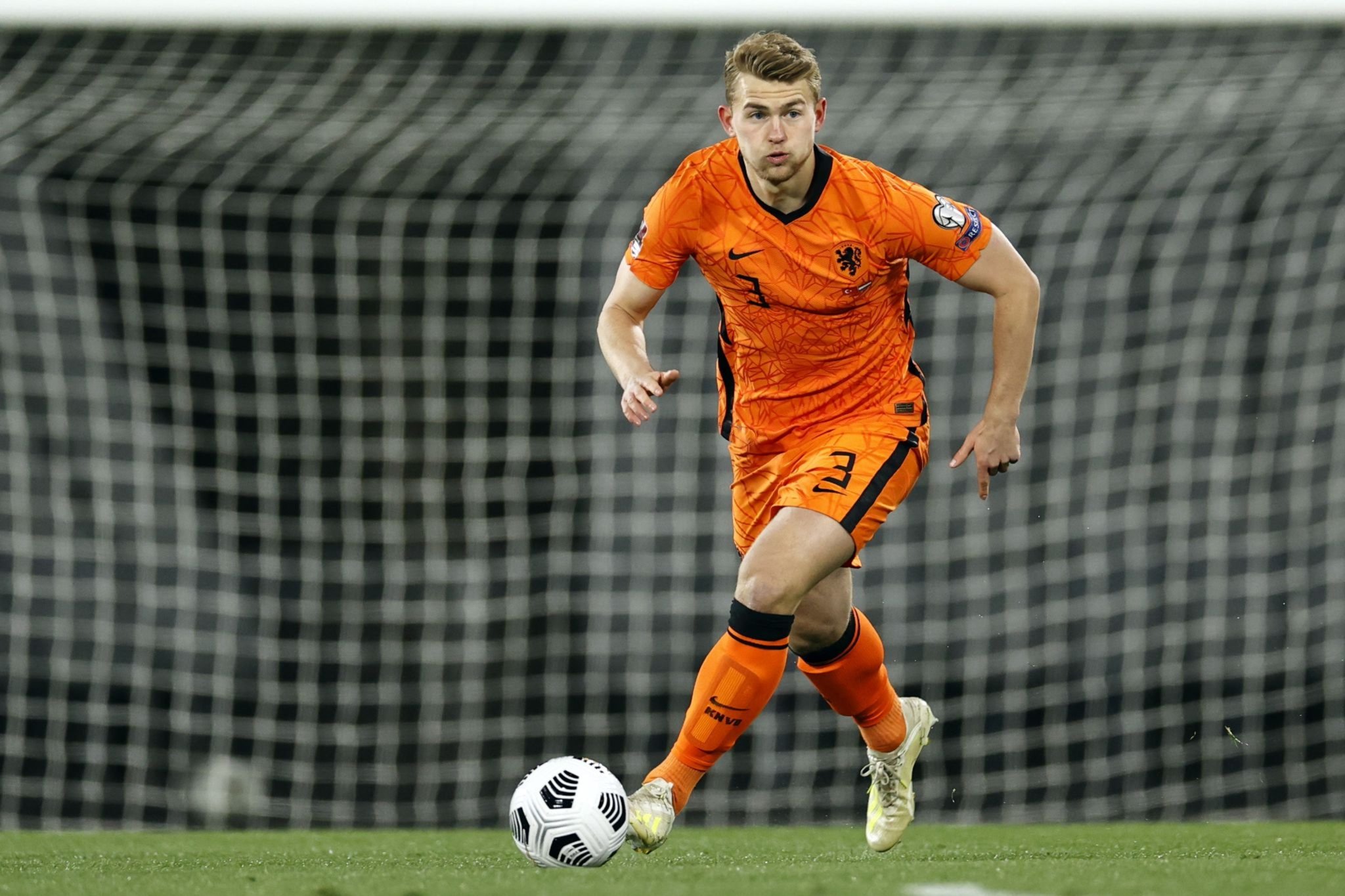 De Ligt is complete package, from defence splitting passes, long range shooting, aerial ability to his intelligent game reading skills, ferocious tackling and physical presence in the box, there’s nothing on a football pitch that he can’t do. Him alongside under-recovery Virgil Van Dijk will be the most dangerous CB pairing to watch in the Euro 2020.

The 21 year old striker became the second most expensive teenager in history when Atletico Madrid splashed €126 million on the Portuguese youngster in 2019. He had impressed everyone in Europe with his clean striking and passing ability with either foot, which won him the Golden Boy award in 2019. He has 15 goal contributions for Atletico this season despite struggling with injuries. 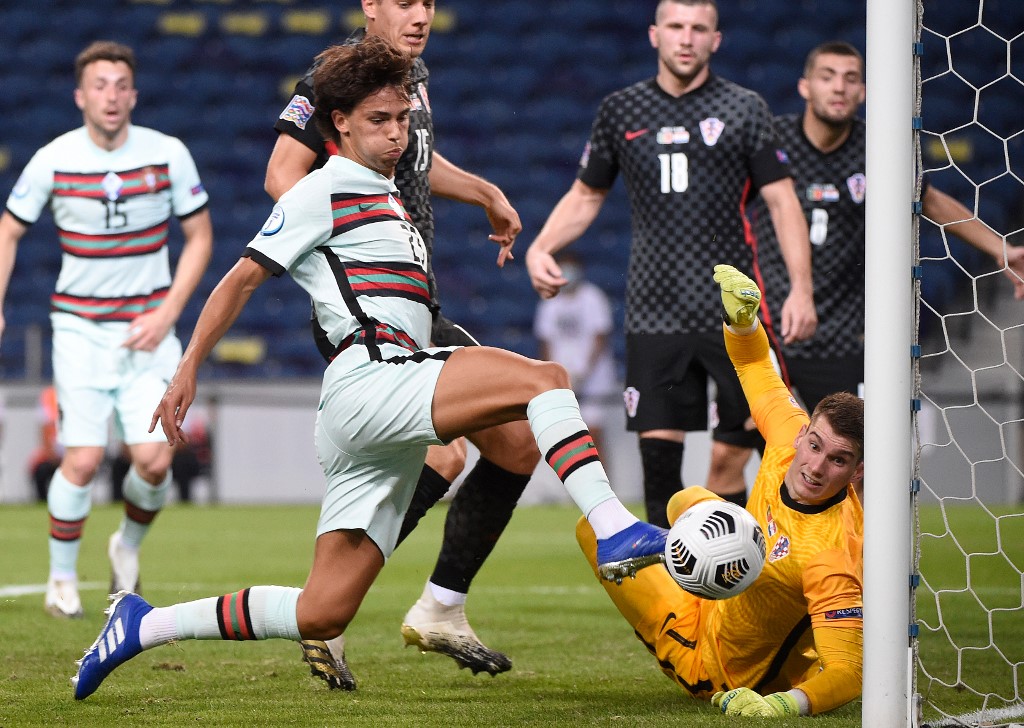 Felix is a versatile player who can play as a support striker, an attacking midfielder and on the left wing too apart from his natural position of a centre forward which makes him an exciting prospect for the Euros. The 21 year old has created his own identity in the national squad despite playing alongside superstars like Cristiano Ronaldo, Bernardo Silva and Bruno Fernandes tells much about his calibre on the pitch.

Note – Some of the aforementioned players have played in the Nations League.