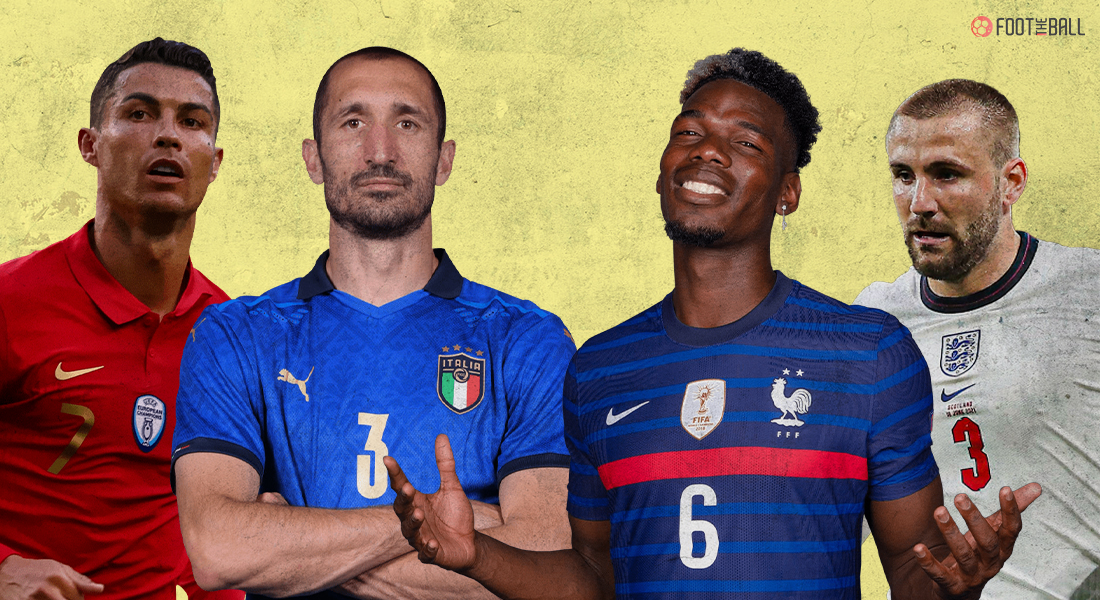 After an action-packed and exciting Euro 2020, UEFA has finally released their team of the tournament. Although, it is safe to say that the fans aren’t really happy with their selection. You can never please everyone, but UEFA has missed out on some big names that had to be high on the list.

UEFA placed the player of the tournament, Gianluigi Donnarumma in the number 1 spot. Kyle Walker, Leonardo Bonucci, Harry Maguire and Leonardo Spinazzola made up the backline. Pierre-Emile Højbjerg, Jorginho and Pedri filled in the midfield and lastly Federico Chiesa, Romelu Lukaku and Raheem Sterling were the front three in the eleven.

We are pretty sure you aren’t fully content by this team and rightly so. FootTheBall brings you 7 players who were unlucky to miss out on a spot in the UEFA Team of the Tournament of Euro 2020.

Shaw had a fruitful 2020/21 season with Manchester United and he carried this momentum to the Euros as well. After being unlucky to not get a starting spot in the first two games in Gareth Southgate’s eleven, poor Shaw has also been robbed of a place in the team of the tournament.

He played his first game of the tournament against the Czech Republic and was undroppable for Southgate ever since. England’s majority of the game revolved around their full-backs which made Shaw all the more important. He was the man of the match in their game against Ukraine and if it wasn’t for Shaw’s early opener in the final, England would have not even made it to the penalties.

Roberto Mancini gave Chiellini the responsibility of leading the Azzurris on the pitch and the veteran did it with a constant smile on his face. Even when Italy were at the brink of getting knocked out against Spain, Chiellini brought positivity to the camp which reassured the nervous youngsters on the field.

Other than being a solid captain, Chiellini’s overall performance was tremendous as well. With 21 clearances and 37 recoveries, Chiellini owned the opposing attackers throughout the tournament. At 36, he played the whole game every time he started and was effecient in extra time as well.

With Eriksen out of the tournament in just a few minutes, Denmark lost their biggest playmaker for the tournament. When the whole world thought Denmark would not even make it through to the knockout stages, young Mikel Damsgaard rose up to the occasion and shunned everyone. Damsgaard was one of the key architects for the Danes in midfield and is surely a strong candidate for a spot in the team of the tournament.

Damsgaard netted a breathtaking freekick from outside the box which almost helped Denmark push through to the finals of Euro 2020. He was the first player to beat Jordan Pickford in the tournament making him one of the biggest breakout stars of the tournament.

With Jordan Henderson out injured for a long period before the tournament, the responsibility of controlling the midfield was handed over to the young West Ham talent, Declan Rice. He had a passing accuracy of 90% throughout the Euros and is the biggest reason why England had the lion’s share of possession in most games of the tournament.

Rice also acted as an extra layer to England’s backline which gave Shaw, Trippier and Walker push upfield without worrying about their defensive duties. The amount of quality in the 22-year-old is actually baffling as we are witnessing the future of English football in this young lad.

The joint-highest goal scorer of Euro 2020 with Cristiano Ronaldo, picking Lukaku over Schick is a daylight robbery. Other than that Supercomputer, no one backed the Czech Republic side to make it far in the Euros. Patrick Schick is the biggest reason why the Czechs made it to the last-8 in the tournament.

They defeated a star-studded Dutch side thanks to Schick’s top-tier performance and he even found the net in the Quarterfinal game against Denmark. His strike from the halfway line against Scotland is going to be remembered for years to come as he has turned himself into a cult hero in Europe.

Cristiano Ronaldo stole the show in the group stages of Euro 2020 as he managed to score 5 goals being in the group of death. At 36, it is almost funny how he has carried Portugal through to the knockout stages almost single handedly. If only the other players played even half as good as he did, Portugal could have won the Euros itself.

He wasn’t even playing as a striker for his side but had more goal-scoring opportunities than their center-forward. It looks like Ronaldo will also show a similar display in the Qatar 2022 World Cup and hopefully the other stars of the team follow in his footsteps.

If it wasn’t for Paul Pogba’s brilliant performance in the centre-half of the pitch, France would have had an even bigger disappointment in Euro 2020. Pogba seemed to be at the heart of everything that went right for Didier Deshchamp’s men. The vision in his through balls was just perfect for the pacy French attackers.

Even in the Round of 16, when Switzerland had a massive lead after the first half, Pogba managed to turn things around with an aggressive and effective attacking display. It is a dream of every attacking player to have someone like Paul Pogba but sadly for the French front line, they couldn’t make the most of it.