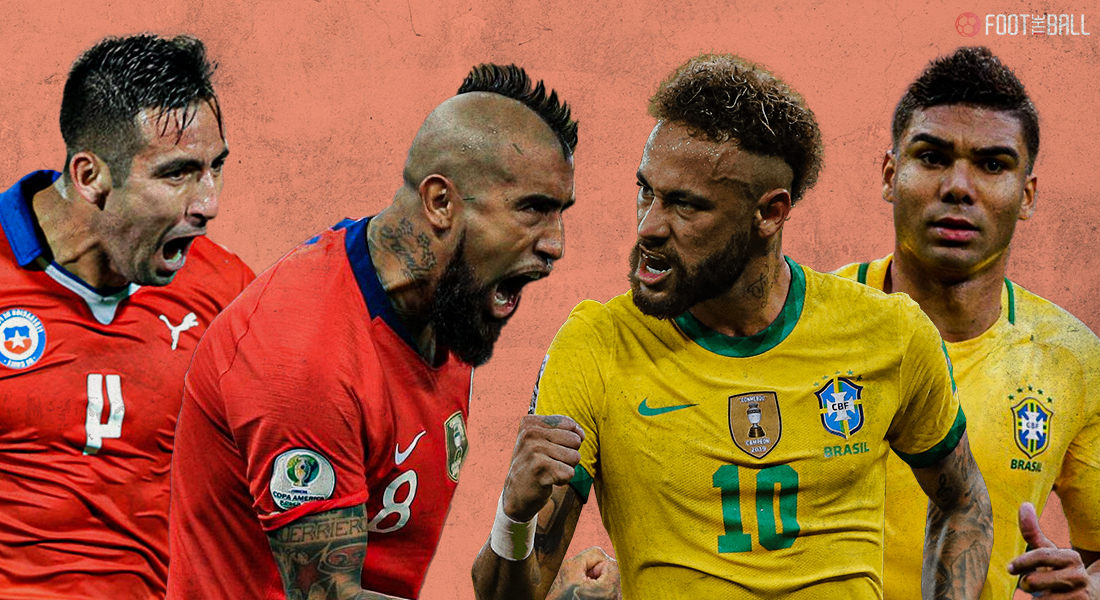 The group stages of Copa America 2021 have ended and the much-awaited quarterfinals will begin this Friday. Knockout ties remain to be the most enthralling aspect of any sporting event. And the key to success in such tactical games is usually held by impactful individuals who either pose a major threat to the opposition or act as a counter threat to neutralise their attacks.

Such matchups are a treat to the lovers of the beautiful game who love every aspect of the sport, whether it is attacking or defending, or whether it is a defence-splitting run from Neymar or a last-ditch tackle from Gary Medel.

As Brazil hosts Chile at the Olympic Stadium in Rio in the most sought-after quarterfinal fixture of this year’s Copa America, many such battles will be on display. Out-of-touch Chile will come into the fixture without one of their crucial senior players Alexis Sanchez while the Selecao are fully fit and in blazing form. The more lopsided a game looks from the outside, the more surprising it turns out to be.

FootTheBall has picked out and analysed three crucial matchups during the Brazil and Chile game, possibly holding the key to success.

Brazil is known for its Samba and love for football and there’s a no bigger proponent of that style of football in today’s football than the world’s most expensive signing ever Neymar Jr. He poses a constant threat to the opponents from the left flank with his pace, skills and shooting. The Paris Saint-Germain winger will be up against Chile’s veteran right-back Mauricio Isla, who was a part of Chile’s successful 2015 and 2016 editions of Copa America.

Neymar was expected to play a major role for Brazil in attack and he hasn’t disappointed so far with four goal contributions in the three games he played. Despite being injured during the domestic season for almost 50% of the matches, he made 14 goal contributions for PSG. Whereas Mauricio Isla hasn’t been really impressive this season, he mostly sat out for his domestic club Flamengo. He only made one appearance in the Brazilian Serie A but has started each game for Chile in Copa America.

The matchup will be a great watch for viewers as Isla has been performing well for La Roja so far and has defended the right flank efficiently. He played a big part in holding Argentina to a 1-1 draw and securing a key point. But he is facing the biggest challenge of the tournament on Friday, trying to stay toe-to-toe with Neymar.

Not only Neymar but attacking runs from Alex Sandro will be another headache for the veteran full-back and he will be put to a massive test. It is predicted to be one of the most important zones for Chile to win if they dream of getting past the home side.

This mouth-watering midfield rivalry dates back to their El Clasico days and it will be just as fierce in the coming quarterfinal fixture too. The two have mastered their trade and despite the five-year age difference, there isn’t much to differentiate in the intensity and passion to win.

Vidal, 34-year old midfield engine, has been a great asset for Chile for the last 14 years and continues to be a crucial part of the La Roja setup. His opponent in the Brazilian midfield, the Real Madrid star Casemiro is nicknamed The Tank for his disruptive style of play and defensive acumen. Both Vidal and Casemiro are extremely strong players who love to indulge in physical battles on the field and always aim to come out on top.

This intense battle will be pivotal for both teams in their pursuit of a semi-final spot and lead to an engaging encounter in the central zone of the pitch.

Apart from his defensive contributions, Vidal is also known for bursting forward and getting into dangerous spaces to help his team build attacks. He has scored 32 goals for the national side in 123 appearances and is one of the greatest Chilean players of all time. The Man of the Match of 2015 Copa America final will need to revisit his prime if Chile is to get to the semi-finals.

Casemiro and Arturo Vidal will go head to head on multiple occasions during the game and give their all for the winning cause.

The continued absence of Alexis Sanchez from the tournament has been a big blow to Chile’s dream of winning their third Copa America title with the veterans who took them to glory twice in their peak. Alexis Sanchez was awarded the Man of the Tournament in the successful 2016 campaign. The responsibility of replacing him in the team is on the 22-year old shoulders of England-born Ben Brereton who recently decided to play international football with Chile.

The Blackburn Rovers forward has already made his impact in his first start for La Roja, scoring the only goal against Bolivia in Chile’s only win so far in the tournament. The expectations are soaring and he can become a national hero if he can help Chile get through the herculean task. He will face Juventus’ Brazilian right-back, Danilo, on the flank and it is set to be an exciting battle that can bend the result towards either side.

Danilo is one of the best fullbacks in the world with both attacking and defensive prowess. The 29-year old can always be a surprise attacking option just like his predecessor Dani Alves and is also defensively proficient.

Naturally a centre forward, Brereton likes to cut in before finding shooting spaces in and around the box. He has a natural poacher’s instinct that lands him in dangerous areas to breach the opponent goal. Danilo might have to halt his attacking runs to avoid giving up space to the young Chilean forward to exploit.

Martin Lasarte will be looking for ways to break down the Brazilian defence, and Brereton’s tall and large structure will surely be a weapon for him. Defeating the tournament favourites in an early knockout round will be arduous and will need the best performances from all eleven players.