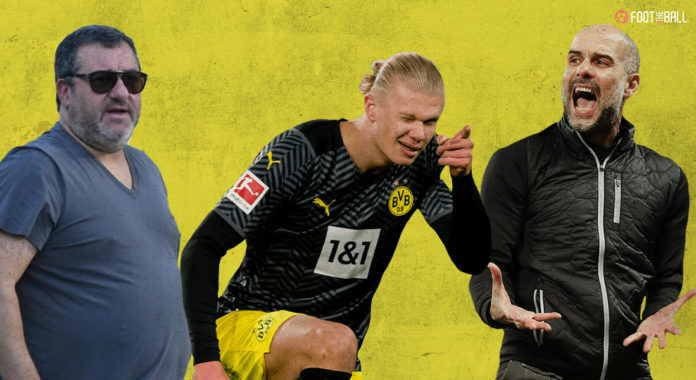 The winter transfer window is well underway with the Premier League already making headlines. Kieran Trippier became the first signing of the Saudi owners of Newcastle United while Philippe Coutinho sealed a sensational loan return to link up with former teammate Steven Gerrard at Villa Park.

The January transfer window is in full swing 📝

With a couple of marquee moves from #NUFC & #AVFC 🔥

Will Trippier or Coutinho be joining your @SkyFantasyFooty team? 🤔 pic.twitter.com/8VqMe5O7N0

The big hitters have mostly stayed silent till now, with none of the top six too keen on making splashy moves. Leaders Manchester City have been doing just fine without a like-for-like replacement for Sergio Aguero, but it looks like those days are coming to an end. Erling Haaland has emerged as a serious target, with the club keen on persuading him to move to England.

Manchester City have made Erling Haaland a top target for the summer window but will have to fight off interest from Real Madrid!🔵

ANYTHING to see this lad in the Premier League!💫

It will not be easy, of course, with a whole host of clubs interested due to the release clause that becomes active in the summer. But do City really need Haaland, given how well they have been performing this season, or should they be looking at other options?

Pep Guardiola is one of the finest tacticians ever seen, and he has been preparing for a striker-less life since last season. He has been using the false nine regularly in the 4-3-3 with a whole host of players playing centrally. Phil Foden, Kevin De Bruyne, Gabriel Jesus, Jack Grealish, and the now-departed Ferran Torres have all been the number 10 in this one-and-a-half years.

Most #PL goals in a calendar year…

City have scored a league high 136 goals during this time, which loudly suggests that the plan is most definitely working. Furthermore, the presence of goal scoring midfielders like Ilkay Gundogan (last season’s top scorer), Bernardo Silva, De Bruyne (when he plays there) and even Joao Cancelo this term, has also alleviated the pressure on the frontline considerably. Guardiola ruled out signing a new striker at the beginning of the season as well, and despite the club’s considerable interest, a move for Haaland in January is a far shot. Borussia Dortmund have already stated they will not sell, given they are under no pressure to do so currently either.

BVB CEO Watzke: “Haaland will NOT leave in January. No way. Who accepts to sell top European striker during the winter break when they don't have to?”, he told @derspiegel. 🟡🚫 #BVB

“Next year? Of course, it will be difficult to keep him. Nevertheless we want to and we’ll try”. pic.twitter.com/FvVCawAh3l

City are well on their way to another Premier League title, their sixth in 11 years, if they keep up this kind of form. The quest for Haaland is also a bigger ploy than just getting the squad an elite goal scorer in order to finally win the Champions League. Several of City’s league and European rivals are heavily involved in the race, with Chelsea, Manchester United, Real Madrid, and Barcelona all favourites.

Los Blancos are trying to assemble a squad with both Haaland and Kylian Mbappe, in a throwback to their Galacticos era but the others are not far behind either.

Haaland has been playing a lot of different formations this season, including the 4-1-2-1-2, 4-3-1-2, 4-2-3-1, depending on the availability of other players. Goals have not been an issue, with 19 across all competitions already, but his fit in Manchester might be. City love short passes, getting the ball out wide, and relying on patient spells of possession in the buildup to scoring.

…to be updated soon.

Haaland relies on his freakish strength to hold up play, knock the ball past defenders and run onto it to get past them. No doubt he will add a physical dimension to the team, with his superb heading abilities and ability to harass players, but he is a very different profile from Aguero.

Further complications can arise when the nitty gritties of the negotiations begin with Mino Raiola being famous for being notorious to deal with. The super agent is infamous for charging high commission on his players’ transfer fees along with making infamous comments if the times get tough at the clubs.

Erling Haaland's agent Mino Raiola says there is a "big chance" the striker will leave #BVB this summer. pic.twitter.com/uZ8xpdBIIE

Manchester United have had to endure his comments for a long time, given Paul Pogba’s up-and-down relationship with the club. There were rumours of him asking for a massive payday for Haaland last summer from Chelsea, though the player and club both denied. Haaland, for his part, has said that those astronomical transfer fees are too much for a single player but no doubt money will be a key motivating factor as the new season gets near.

There’s always questions of how the performances will be affected as a player moves to a different country. The Bundesliga is not too famous for its competitive nature, and with RB Leipzig further falling behind, Haaland has been able to perform wonderfully every week. City would be wary of purchasing a player based only on his goal scoring, with Jack Grealish’s underrated start a stark reminder.

🗣 | Jack Grealish on his goal output:

“ I think [stats] are important because at the end of the day that is what people look at such as how many goal involvements us attackers have. Especially when you come to a club with the price tag that I did.”

The 100m pounds player has had to bide his time, not having the immediate impact one would have expected upon his move. The risks with Haaland do seem to be less, with his proven track record in Europe and Germany but Guardiola has been working wonders without a striker. Why fix it right now if it ain’t broke?