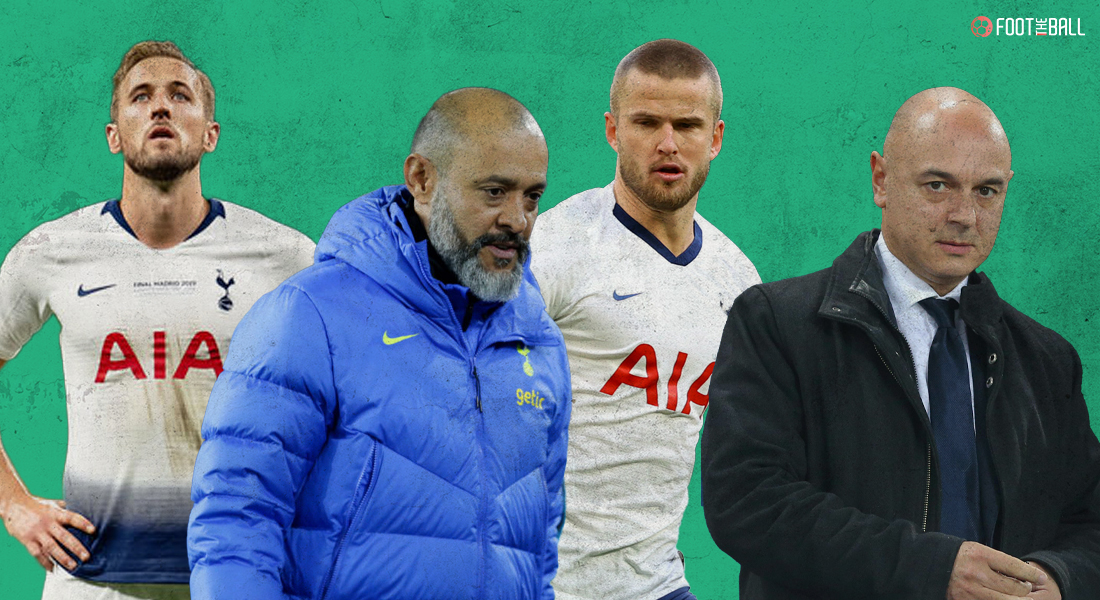 In the end, it was all too meek and predictable. The crushing 3-0 defeat to Manchester United was enough for Spurs chairman Daniel Levy to pull the plug on Nuno Espirito Santo’s extremely short era. 17 games was all it took for the London club to think that a change was necessary.

Currently placed 8th in the table with five wins and five defeats from 10 Premier League games as well as having a negative goal difference (-7). In Europe, they sit third with four points from three games and suffered an embarrassing loss to Vitesse last time out. However, the manager himself was already doomed from the start, given Spurs’ myriad of problems for quite some time and the fact that the players just looked beaten every time.

It is up for debate how much of the Spurs’ current situation is up to Levy and new sporting director Fabio Paratici as well.

Having dismissed Jose Mourinho back in April, the hunt for a new manager commenced soon after. It would take more than two months for the club to finally agree with someone. That in itself was the first warning. The fact that names like Brendan Rodgers, Julian Nagelsmann, Erik ten Hag all chose to remain with their current clubs while Mauricio Pochettino also refused to come back.

BREAKING: Gennaro Gattuso’s move to Tottenham is OFF. After initial talks Levy has decided to go in another direction. The fiasco of Spurs’ new manager search continues. (Source: @David_Ornstein) pic.twitter.com/V1gtZlugXd

Antonio Conte was also not keen on joining, but a reverse in fortune could be on the cards as the board tries one more time to get the Italian. Nevertheless, the carousel stopped with the former Wolves man Nuno whose appointment kind of went against what Levy wanted. The chairman had talked of developing players from the youth academy and playing a more exciting brand of football involving them.

Nuno was not like that, having used a very settled squad over his Premier League career which left very scope for the emergence of young talent. Furthermore, given the fact that he was not high on the priority list for the board might have left his confidence shaken even before the bigger action behind the scenes was being played out.

THE SAGA OF HARRY KANE

It dominated headlines days on end, as the future of the England skipper was dissected feverishly. Kane was said to have a “gentleman’s agreement” with Levy regarding the fact that he could leave this summer. Levy refused to let the striker go and rejected bids from Manchester City of 100million pounds.

Kane retaliated by skipping the start of training and joining the team pretty late before having to go through the paces individually due to quarantine rules. All of this was being played out in the backdrop of Nuno’s appointment, with the manager being forced to answer awkward questions over his talisman’s future.

The never ending question: Will Harry Kane stay or will he go? 😵‍💫 pic.twitter.com/eCp6tEqJaZ

Nuno, expectedly, was left floundering and had little choice but to stress on the importance of the squad being together and keeping up the work needed as they built towards the new season. Needless to say, this was hardly ideal preparation for a team that was finally looking to embark on a new chapter, one where results would have to improve dramatically.

The transfer business conducted by Spurs since the high of the 2019 UEFA Champions League final has been dismal to say the least. Matt Doherty, Ryan Sessegnon, Jack Clarke are just some of the standout names who have had a disastrous time so far. Even the names who have had somewhat moderate success have hardly lived up to their original billing.

Spurs have spent over £200m on some absolute dross over the last 3 seasons.

Tanguy Ndombele had a massive falling out with Mourinho while Giovani Lo Celso, Steve Bergwijn, and Sergio Reguilon have struggled to establish themselves as worthwhile starters. This season saw some capable replacements being brought in but still the team severely lacked sharpness. Cristian Romero and Emerson Royal were meant to strengthen the defence but have conceded seven goals in the past five games.

Bryan Gil needs more time to get himself familiar with the setup as Nuno seemed unsure of the Spaniard’s correct position in the team. All of this underlined the dependence on Kane and Heung-Min Son, the pair having combined for 64 goal contributions last season. The plan has backfired spectacularly under Nuno, who has had to suffer across all departments of the lineup.

It had all started out so promisingly for Nuno and co. back in August. Three consecutive 1-0 wins, including a surprising scalp over the defending champions on opening weekend, had propelled Spurs to the top of the table. Nuno was named Premier League Manager of the Month and the signs of making it back into the Champions League were slowly coming back.

For the first time in top-flight history, Tottenham Hotspur will end the day top at the same time as Arsenal ending the day bottom of the table.

September brought about their downfall in spectacular fashion. No wins in normal time across all competitions, three losses in the league which shipped in nine goals while scoring only once prompted a change in formation. 4-3-3 became the 4-2-3-1 with Kane as the sole striker. That has not worked out at all, with him scoring only once all season. It is clear by his body language that his effectiveness has dropped off a cliff as he barely looks motivated to carry the team forward, something which he did regularly last term.

0 – For the very first time in his Premier League career, Tottenham's Harry Kane has had neither a shot nor a touch in the opposition's box in a game where he completed the full 90 minutes. Isolated. pic.twitter.com/KiPNybiOI8

He had no touches in the opposition’s penalty box against Crystal Palace and had no shots on target on Sunday. The drop in output has severely impacted the team who look lost. Nuno has done himself little favour either, his choice of persisting with Pierre-Emile Hojbjerg and Oliver Skipp has severely curtailed the forward movement of the side.

Don’t think the Spurs fans were happy with the decision to take Lucas Moura off… 😬 #TOTMUN pic.twitter.com/UcviYURoSh

Lo Celso was virtually non-existent against United and the surprise substitution of Lucas Moura after just 10 minutes of the second half was met with a chorus of boos from the home support. It was never going to get better from there.

Conte’s likely takeover in the hot seat begs the question what changed from June till now. He is not a great fan of joining clubs once the season has started and given the performances of Spurs, he must be putting a lot of faith in his abilities to turn the ship around along with reinforcements coming in January too.

There are many things currently wrong inside Tottenham Hotspur at the moment.

However should Spurs press ahead with the appointment of Antonio Conte it would show a real statement of ambition and intent for the future of this football club.#THFC #COYSpic.twitter.com/RfaZJ428F0

The team already looks to be floundering and the season is not even halfway through yet as Nuno had to pay the price for a series of bad decisions stemming from the top.