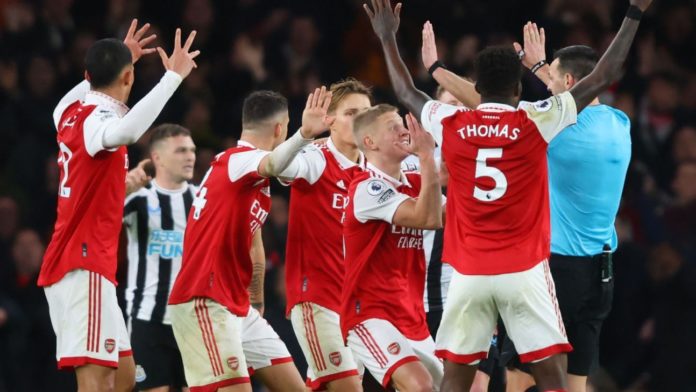 Since the new era after the departure of Arsene Wenger from the dugout of the Emirate stadium, Arsenal are looking lively with much hope to once again become the Premier League champion after 18 years without the most prized going in English football.

The last time Arsenal won the Premier League, it was a landmark achievement that brought the footballing world to a halt in their perspective toward the great success of going the entire season without a defeat as the only Premier League team to ever won a gold medal in the rich history of the league.

Though the team are keeping their poker face like a master dealing with the superior in the game, looking to exert their dominance on the pro get to relax and going in this season, the Gunners are lauded by many. And just like Caesars online casino in PA that rates online poker players with odds, online bookmakers across the world have handed the North London outfit interesting odds to back their journey, with only 16 league games played this season.

More so, many Gunners faithful are now dreaming of bringing the Premier League gong to the emirate stadium for the first time since their move away from Highbury in 2006.

In what many wouldn’t have believed in little than a year ago as the North London club are finding it difficult to find their footing in the league while languishing at the bottom half of the log. Still, since the new season’s dawn, the high-flying Gunners are now showing what they are made of while blazing their counterparts away, except the resurgent United that got the better of them in the league.

With the current North London team, many are beginning to dream as this season could be their turn to lift the Premier League, since the dominance of Manchester City and Liverpool for over five seasons.

Though Arsenal are imperatively part of the English team’s big guns despite their lack of Premier League going to two decades now, and while many see the Gunners as a failure during the spell of not winning the Premier League despite winning the FA Cup countless times, followed by Carabao cup and a Community Shield Cup.

Can the Gunners win the Premier League

With such prestige, history and financial capabilities, Arsenal are still worthy of being the big name today in the league; winning the Premier League at the season’s end will undoubtedly make the club even bigger than their counterparts.

Although Arsenal are currently topping the premier league, log with a point differential of five, equally playing fourteen league games like the second-spot occupants, Manchester City, who are touted to win the league eventually.

Most people are not fazed by the top spot of the gunners on the log. However, most are impressed with Arsenal’s form and dominance in the matches they’ve played this season, which gave many the belief, with Manchester City lurking attentively behind the gunners, some are unsure if they have the right to start dreaming.

While the World cup has given a necessary break to the teams in the league, the likes of Manchester City, Manchester United, Chelsea, Tottenham Hotspurs, Liverpool, and even Arsenal have their best players represent their respective countries at the biggest stage of the world football, and this could provide the leap for the small teams in the league to relax, energize, and focus on what they are doing wrong to effect their correction once the league resume.

While Arsenal are dreaming, one of the team’s attacking fulcrum, and most consistent fielded player, Gabriel Jesus, will not be available for a long time which could be detrimental to the effectiveness of the team play going forward. But the likes of Eddie Nketiah has shown on so many occasion that if given the time and chance, he will surely deliver

Once again, the likes of Kevin DeBryune and Ilkay Gundogan, who is the principal player of the next rival of Gunners for the title, are back early from the World Cup, as the likes of Erling Haaland do not even participate in the ongoing World Cup, Manchester City best legs would have been fresh for the most lethal part of the season.

More importantly, another team might not have currently been a threat, but their existential factor is enough to resuscitate their season back on track.

The likes of Liverpool might be drooling behind, Tottenham Hotspur and Chelsea might have been inconsistent, and Manchester United are currently finding their foot in all honesty, but once these teams peak, there is a chance that Arsenal might make the top four, just like they were left behind in the last Premier League campaign.

Furthermore, Arsenal are looking to count their chances on making a wave in the league, which many opinionated their early exit from the Carabao Cup. Though the resumption of the FA Cup in January might postulate, another theory and the constant urge in the UEFA Europa League is another thing entirely.

Many might not believe in such a theory as the early exit in both Carabao and FA Cup last campaign still did not ensure their path to the Champions League this season. Thus, the team will be careful enough to ensure their progress in all competitions this season.

Without further ado, there is no doubt that the high-flying Arsenal are making their fans worldwide believe again.

Snapping up some important winning against the likes of North London rival Tottenham Hotspurs, against their arch-rival, Chelsea, and then against Liverpool, who have been having the edge over them for a while. Though the Gunners are yet to play their fellow table topper, Manchester City’s performance so far in the league is worth drooling over.

But many still believe that even if the Gunners failed to win, qualifying for the Champions League is a must. This might enable them to consolidate the late surge during the last campaign and go forward in subsequent seasons. Then, Arsenal might have their chance of scooping the league back to the Emirates stadium.

Even though it’s time to believe, many keep their fingers crossed and hope to celebrate at the end of the season. Still, if not, Arsenal could easily consolidate on the high form and young team to ensure further success in not so distant season.