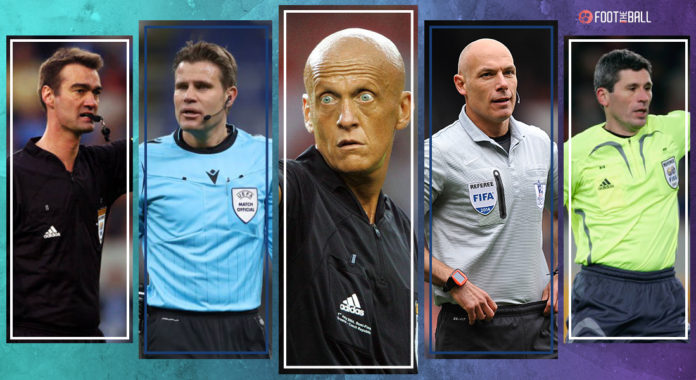 In today’s world, most of the games in football will attract the ire of fans for refereeing decisions on the field. Even the 2022 FIFA World Cup saw multiple controversial moments that reignited the debate on the quality of refereeing in the tournament. Conducting an entire match with 22 players on the field without any significant controversy, and that too regularly is an art that only a few have mastered.

Some of the referees, like the players they officiate on the field, have entered legendary status. These officials were respected and, in some cases, were feared by the players. This respect came from years of brilliant officiating at a time when technologies such as Video Assistant Referees (V.A.R.) were not available for the man conducting the game.

So, we bring you the top 10 famous referees of all time.

Oscar Ruiz Acosta is one of the finest referees to ever come out of South America. The Colombian officiated in three different World Cups and several important matches throughout his career. His international career started in 1995 when he officiated a game between Paraguay and Venezuela.

For the next 16, he was a FIFA-affiliated referee. Ruiz officiated in 2002, 2006 and 2010 FIFA World Cups. He retired in 2011 but served in the CONMEBOL referee assistance program. Although his reputation was marred after three of his former colleagues accused him of asking for sexual favours for promotion.

You’re a brilliant referee if you officiate a UEFA Champions League final and a European Championship final within a space of 43 days. Pedro Proenca was one of the finest referees from Portugal. He started his career in his native Portugal, where he was made a FIFA-affiliated referee after commendable performances in 2003.

Six years later, he was promoted to the elite category of UEFA ratings for referees. Proenca announced his retirement from officiating in 2015.

Sandor Puhl’s career was one that saw incredible highs and equal lows. The Hungarian was one of the best referees of all time and has officiated top matches such as the final of the 1994 FIFA World Cup between Italy and Brazil and the 1997 UEFA Champions League final between Juventus and Borussia Dortmund.

However, in between this, he was suspended for eight matches after he failed to spot a foul from Italian defender Mauro Tassotti on Luis Enrique, which broke the latter’s nose.

This would be the only controversy in his career as he was voted by The International Federation of Football History and Statistics (I.F.F.H.S.) World’s Best Referee of the Year four times in a row between 1994 and 1997.

Frank de Bleeckere is probably the best referee to ever come out of Belgium. After making his debut in 1984, De Bleecker officiated for the better part of the last decade of the 20th century before being appointed as a FIFA-affiliated referee in 2998. He held this position from 1998 to 2012.

Between 2000 to 2013, he was voted the best referee in the Belgian league for a record seven times. He made his international debut in a 2002 FIFA World Cup qualifier between Cyprus and Ireland.

Denmark has provided football with some of the best referees throughout history, and Peter Mikkelsen is one of them. The Dane was so impressive that he was elevated to a FIFA affiliate referee and conducted three matches in the 1990 FIFA World Cup aged 30.

He would then referee at the 1992 and 1996 European Championships and the 1994 FIFA World Cup. The I.F.F.H.S. declared him the best referee in 1991 and 1993. Mikkelsen declared his retirement from football after the 1998 FIFA World Cup qualifiers concluded.

He died in 2019 after suffering from cancer for years.

From one Dane to another, Kim Milton Nielsen was a tall figure that would demand respect from everyone on the pitch. He started officiating in 1975 in the Danish league at just 15 years of age. 13 years later, FIFA recognised him in 1998, aged just 28.

He first gained prominence in the early 1990s when he started taking charge of matches in UEFA competitions. His first big match was the 1994 UEFA Cup final. Nielsen followed it up with Euro 1996 and 1998 FIFA World Cup displays. In the latter, he was the referee that sent off David Beckham after he kicked Diego Simeone during the quarter-final match.

The referee also took charge of the match between AS Monaco and Porto in the 2004 Champions League final.

In his illustrious career, Webb officiated matches such as the 2005 and 2009 F.A. Cup finals, the 2007 Football League Cup final, and the 2010 FIFA World Cup final. In the last game in 2010, Webb showed 14 yellow cards, which included the two to centre-back John Heitinga.

Webb announced his retirement in 2014 and became a technical director of the Professional Game Match Officials Board before becoming the director of referees for the Saudi Arabian Football Federation.

Howard Webb takes on a new role after ending his 25-year career as a referee: http://t.co/FjVgeTj9Nq pic.twitter.com/W03cIMu0Eg

Felix Brych was voted the best referee of the last decade by the I.F.F.H.S., which shows how highly regarded the German is. Brych started his career in 2004 in the Bundesliga and, within three years, would become a FIFA-affiliated referee.

He would only officiate one match in the 2018 FIFA World Cup after being heavily criticised for not awarding Serbia a penalty.

However, he returned in the Euro 2020, where he officiated several matches, including the semi-final between Spain and Italy.

Like Felix Brych, Markus Merk was voted the best I.F.F.H.S. referee between 2001-2010. Widely regarded as one of the best referees, Merk has the record of officiating the highest number of Bundesliga matches in history.

Merk started his career in the Bundesliga in 1988 when he was only 25. In the next four years, he would be recognised by FIFA and would also be appointed as a referee to the 1992 Summer Olympics in Barcelona.

Merk has been voted the best referee three times by FIFA and the German Football Federation six times.

The G.O.A.T. of referees, Pierluigi Collina, is regarded as the best referee to step on a football field. The Italian won the best referee award six times by the I.F.F.H.S. between 1998-2003. Nicknamed ‘Kojak’, he officiated several matches in the 1996 Summer Olympics. He became a FIFA-affiliated referee in 1995.

He officiated several vital matches, including the 199 Champions League final between Manchester United and Bayern Munich and the 2002 FIFA World Cup final between Germany and Brazil.

You didn’t mess with Pierluigi Collinapic.twitter.com/kI0qi2eQaf

Collina retired from the game in 2005 but still acts as a consultant to the Italian Football Referees Association (A.I.A.) and other refereeing associations.