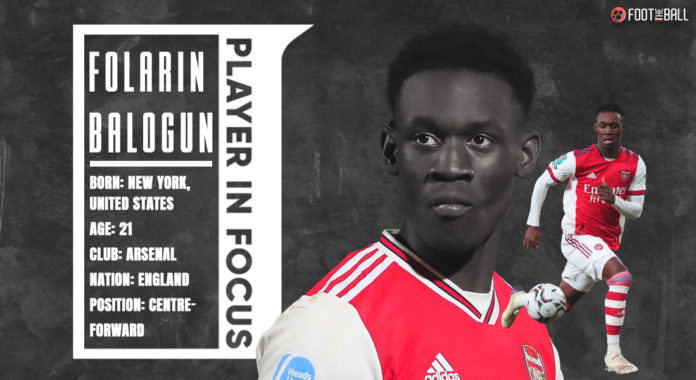 By the time the next World Cup arrives, we will surely see many new stars as the generation of Lionel Messi, and Cristiano Ronaldo hang up their boots. This season has already shown us some players who have come out, and one of them is Folarin Balogun. The striker at Rennes on loan from Arsenal has set alight the Ligue 1.

Last season, another Arsenal loanee William Saliba helped Marseille finish second in Ligue 1. Saliba is now an integral part of Mikel Arteta’s defence that has helped the Gunners establish a five-point lead at the top of the table as they look for their first Premier League title in 18 years.

And from his performance, Folarin Balogun is just showing us how threatening Arsenal’s attack will be from next summer. So, who is Folarin Balogun, and how good is he?

How good is Folarin Balogun?

Folarin Balogun was born in New York to Nigerian parents who migrated to England when he was just two years old. As a result, internationally, Balogun is eligible to represent England, Nigeria and the United States. Aged just eight, his parents enrolled him in Arsenal’s academy, where he spent his entire youth career.

He made his debut for Arsenal under 18 in the 2016-17 season, making one appearance against Liverpool. However, his next season would be phenomenal as he scored nine goals and provided three assists in 14 matches for the under-18s. He would also make appearances for the under-23s and the FA Youth Cup, scoring one and two goals, respectively.

Balogun would bring his most lethal form the following season, scoring 25 goals and providing four assists in 18 games. He was the second-highest goalscorer behind Ellis Simms of Everton.

These two seasons made the club promote him permanently to the under-23s, where he scored ten goals and provided four assists in 15 matches. In addition, he was also named on the bench for Arsenal’s first team in a 5-0 win over Nottingham Forest in the EFL Cup.

In 2020-21 he would finally get a taste of first-team football as he made his debut in the EFL Cup against Ipswich, where he also scored his first goal. And while he was not given any chances in the Premier League, he would play in the Europa League.

In his first senior season with Arsenal, Balogun scored three goals, one in the EFL Cup and two in the Europa League. After that, however, he was deemed surplus to requirements by Mikel Arteta, who sent him out on loan to Championship side Middlesborough. A return of only three goals was considered an underwhelming season by his high standards. And thus came the current loan spell in Ligue 1.

After playing 19 matches, he has scored 14 goals and is the leading goalscorer in Ligue 1, ahead of Mbappe, Messi and Neymar. The 21-year-old has also scored half of his team’s goals and is the key reason they are in 10th and not fighting it out in the relegation zone.

Ranked as a lethal finisher by Soccerment, Balogun is the target man for Reims up top the field. In fact, data from Fbref shows that Balogun receives 8.53 progressive passes per 90 minutes from his teammates, which is among the top five percentile of strikers.

He also attempts 3.34 dribbles per 90 minutes among the top nine percentile of strikers.

However, his passing numbers could be better compared to 10.16 completed passes per 90 minutes, putting him in the bottom eight percentile of attackers. However, one of the reasons could be the lack of quality in the squad, which forces him to become an out-and-out poacher or a fox in the box.

Folarin is a player who loves to drop deep but, despite being a centre-forward, loves to use the inside left channel. He does this as it allows him to cut back inside and get the ball on his right foot, which is his strong foot.

As mentioned earlier, his passing and first touch could be better; however, once he gets the ball under his control, he is adept at playing quality through balls. In addition, he is brilliant at dragging opposition players out of their zones, thus making space for his teammates to exploit.

Balogun is also an expert in making precise runs that beats even the best set offside traps. In fact, this made him such a lethal forward and made his teammates the focal point of their passes in the attack.

All of his goals this season have come inside the box. Of course, he will need to develop additional skills, but that can only come if he plays in a system that encourages passing and requires the striker to drop down and help in the build-up play. Thankfully, Arsenal play a similar style which will be helpful for him if Arteta considers him ready for the first team.

In 2020, there were reports that Balogun and Arsenal could not agree to a deal, and thus he was close to joining Brentford. However, apart from that, the only transfer news he has been involved are the two loan spells to Middlesborough and Reims.

And with the performances that he has shown this season, it is unlikely the Gunners will allow him to leave even if a substantial offer comes. Arsenal are already reaping the benefits of giving William Saliba a chance in their squad, and next season they could do the same with the forward.

Balogun must now focus on ensuring that he has a solid finish to the Ligue 1 season, which will genuinely increase his prospects of playing in the big leagues.