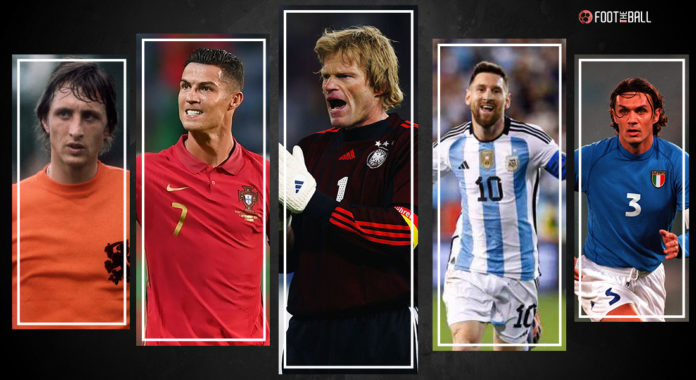 Lifting the FIFA World Cup would be the pinnacle of any footballer’s career, it’s what each and every one of them dream of when growing up.

Unfortunately, some of the finest players in the beautiful game’s history were denied the opportunity to do so. Some represented nations that had no chance of winning the tournament, others came within touching distance of the trophy.

FootTheBall takes a look at those great players who missed out on football’s most prestigious trophy there is.

Leo Messi came so close to winning the World Cup in 2014 but lost the final to Germany by a 1-0 margin. The little magician was a standout player in the 2014 world cup and won the Golden ball.

However, that’s not what he was looking for as the player often says many times “My aim is to win Worldcup with Argentina”. The little magician won the Copa America 2021 with Argentina and with that won his first International trophy. He is now aiming to win this year’s FIFA World Cup in Qatar.

He will be in action in Qatar which will be his final major tournament with Argentina.

What is there to say about Cristiano Ronaldo that hasn’t been said before? People have differing opinions about his all-round ability, but no one doubts the strength of his finishing. Even those who believe him to be overrated are unsettled when he collects possession against their beloved club, fearing an unstoppable drive or a slick piece of skill.

Having won almost everything in his illustrious career – including the 2016 Euros and 2019 Nations League with Portugal – there is one glaring omission from his trophy cabinet, and at 37 years of age, it’s difficult to see him rectifying that.

Regarded as the best European player of all time and founder of Total Football, John Cruyff never won a single edition of the FIFA World Cup. Johan Cruyff took the Netherlands to two finals but did not manage to win.

In 1974, Johan Cruyff’s team was the hot favourite to win it but luck had other plans. His archrival Gerd Muller scored the winning goal and handed him one of the world cup finals losses.

It’s one thing to play professional football for 24 years; it’s something completely different to do so as a left-back and maintain consistently-high performance levels throughout.

Nevertheless, all four of Maldini’s World Cup campaigns ended in disappointment, an outcome that was perhaps made more frustrating by Italy’s success in the first tournament after is international retirement.

Then again, he may be quite satisfied with winning the FIFA Club World Cup in 2007 with Milan, plus the seven Serie A titles and five European Cups that came his way during a career-long love affair with the Rossoneri.

The only goalkeeper to be awarded the Golden Ball was also the villain in Germany’s 2002 loss to Brazil in Yokohama. It was Kahn who gifted Ronaldo the opener in the second-half, but his status amongst the game’s greats is not remotely harmed by that error.

If you never watched the Bayern shot-stopper play, just imagine how incredible Manuel Neuer was until 2017 and combine in with the brilliance of prime Iker Casillas.

The current UEFA president formed the heart of the 1984 European champions, scoring nine goals in just five matches. Platini played in the World Cup in 1978, 1982 and 1986, but the best France could do in those tournaments was reach the semi-finals in ’82 and ’86. During a five-year stretch in the mid 1980’s, he won two Serie A titles and a European Cup with Juventus.

Reaching the 1966 World Cup final and pretty much single-handedly carrying Portugal to the finals was the highlight of Eusebio’s career. He is also one of the top 10 players to have scored the most goals in professional football. Eusebio was the Pele of a very mediocre Portugal side.

One of the greatest strikers of all-time, Marco van Basten played only a single World Cup in 1990. The Netherlands bowed out early in the competition, in the second round.

The striker was forced to retire at the age of 30 following a series of injuries, which brought the curtains down on a wonderful career in which he scored 218 goals from 280 club matches and 24 goals in 58 matches for his national side.

The legendary striker who scored goals for fun also failed to win the World Cup. Puskas scored 514 goals in the 530 matches he played at club level, while he also scored 84 goals from 85 games for Hungary.

He played 1954 World Cup with Hungary winning the Golden Ball. Hungary finished as the runners-up in 1954.  The striker played the 1962 World Cup with Spain after migrating to the country a few years earlier. However, La Roja were knocked out in the group stages.

If the Real Madrid of the past decade has belonged to Ronaldo, then Los Blancos of the 1950s and 1960s is without doubt Di Stefano’s.

The Argentina-born Spaniard was the driving force behind five consecutive European Cup triumphs, yet he couldn’t bring the same success to any of the national teams he represented. Both Spain and his country of birth were still developing as footballing nations, while a four-cap spell with Colombia was never going to yield Wold Cup immortality, not that he needed it given his ranking in Madrid.