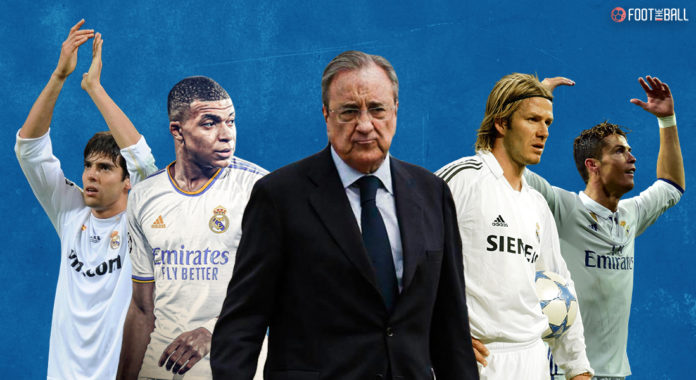 Real Madrid are having a pretty solid year. Having been crowned La Liga champions for the 35th time, Los Blancos are also through to the final of the Champions League. They will be bidding to win their 14th European crown on the back of a sensational season from Karim Benzema.

However, things could be getting even better. Madrid have already signed Antonio Rudiger on a free transfer to shore up their defence.

Everything is now done between Real Madrid and Toni Rüdiger. The deal has been completed, club sources confirm: he will play for Real. ⚪️⭐️ #RealMadrid

Contract until 2026, there’s no option for further season.

Official announcement: end of the season.

That is a great piece of business but the best is yet to come. Multiple reports suggest that Kylian Mbappe, the long-admired prized favourite of Florentino Perez, is on the verge of a move.

PSG have been trying their best to persuade the French superstar to stay. Mbappe idolizes Cristiano Ronaldo and spoken publicly of his desire to play for Madrid. Moreover, when papa Perez eyes you, any team’s chances of keeping their star thins pretty quickly.

Mbappe will be the latest addition in the team’s Galacticos era that looks never-ending. There have been several starry names over the years and Mbappe would fit in fine. FootTheBall looks at the top Galacticos signed under Perez.

The original fashion icon of football, Beckham joined Real Madrid after falling out with Sir Alex Ferguson. He spent four years in Spain, winning the La Liga and Spanish Super Cup. There were several moments of dazzling play, exquisite passes, and general fanfare whenever Beckham was involved. He was one of the first Galacticos grabbed by Perez during his first presidential reign.

O Fenomeno was unstoppable on his day, capable of producing magic every time he stepped onto the pitch. Ronaldo spent a little over four years with Madrid, scoring 23 goals in his debut season of 2002-03 which won them the league title. MLuisoreover, Ronaldo had already played for Barcelona before this so become one of the few players to have played for both sides. Nowadays, Ronaldo is successfully leading two football clubs as owner and is one of the most business savvy former footballers.

One of the most successful Galacticos from the first spell, Figo joined Madrid at an opportune time. He won two La Liga titles in three years, with a Champions League trophy sandwiched in between. Figo’s move from Barcelona did not go down well with the Blaugrana faithful as illustrated by the infamous pig’s head incident. However, Figo would soon join forces with Ronaldo, Beckham, and other superstars in star-studded era.

The French icon was the costliest Galactico of the first era, and it reaped rewards. Zidane hit one of the most consequential and amazing goals in the 2002 Champions League final. That goal further cemented his status as one of the game’s best players. Zidane would team up with the rest of the Galacticos soon after. Moreover, his presence has been supreme in helping Madrid win the Champions League three times in a row as manager. Truly one of the best to ever play for Los Blancos.

The 2008 Ballon d’Or winner had a special relationship with football. Kaka could produce magic at the drop of a hat. Though injuries restricted his superlative gameplay, Kaka was still a force of nature whenever fit. Madrid were in the early days of their second Galacticos era and Kaka proved to be a pivotal signing in that regard.

The three-time Champions League was a Galactico before the era had even begun. Carlos joined Madrid in 1996, and would spend over a decade at Santiago Bernabeu. That wand of a left-foot, coupled with vicious free-kicks and superb technical ability made him a joy to behold. Carlos would fit in seamlessly with the superstars of the early 2000s and become an integral part of the team. Perez may have initiated the Galacticos era, but he certainly had Lorenzo Sanz to thank for this acquisition.

Having long been in the shadow of Cristiano Ronaldo, the 2021-22 season finally saw Benzema underline his dominance. He has been one of the superstars leading Madrid’s charge since Ronaldo left. Benzema has been the main reason why Madrid are into the final of the Champions League. He scored hat-tricks against PSG and Chelsea, singlehandedly changing the course of ties. Having also been welcomed back into the national squad, Benzema will be hoping to lead France’s defence of the World Cup in Qatar.

The 2018 Ballon d’Or recipient has been working his magic for a decade in Spain. Modric is one of the greatest visionaries of the game, demonstrated by his trivela pass to Rodrygo against Chelsea. Even at 35-years-old, Modric is still running teams ragged with his commitment and desire. He has recently signed a contract extension so Perez has plenty to look forward to. One of the most underrated signings of the whole Galacticos era.

⚪️ Outside of the foot pass by Luka Modrić or the finish by Rodrygo? 🔥#UCL | @realmadriden pic.twitter.com/Pvx67NTATu

The greatest Galactico in the history of the era. Ronaldo was a literal game-changing signing for Perez in 2009. He is the top-scorer in the club’s history and scored the most number of goals in a single season. Ronaldo was the catalyst behind numerous spectacular results, including the Champions League treble. Moreover, Madrid had no worries with Ronaldo as their frontman, with trophies flowing in.

The latest Galactico has a world-beating CV already. The World Cup winner is already PSG’s second-highest scorer of all time. Mbappe’s clinical nature, decisive finishing and insane pace make him an all-round package. Madrid themselves were left on the mat by Mbappe in the Champions League round-of-16 tie. Therefore, he will definitely have the platform to take him game to the next level.