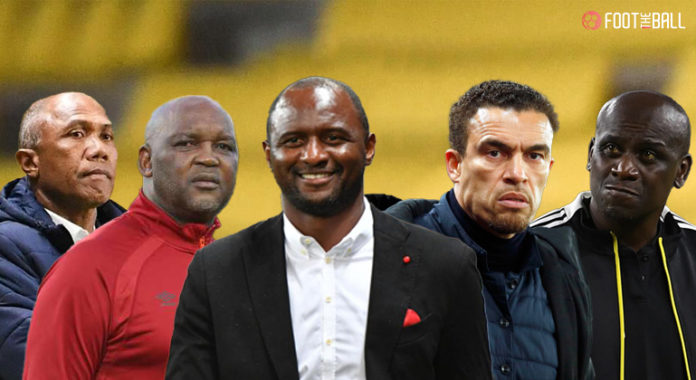 Football is a game which brings people closer together. The game has given the poorest, oppressed, and unlikeliest players a medium to display their skills at the highest levels. And it is the only area of employment with one of the most significant proportions of players of colour. Forty-three per cent of all Premier League players are black.

However, this diversity needs to be reflected when it comes to managers. Currently, in the Premier League, there is only one black manager. This is the case across the top leagues in Europe, as there is a shortage of black coaches in football.

However, a new breed of managers is making strides for the black community in football. So, who are the best black managers making waves in football?

Patrick Vieira has been one of the best defensive midfielders ever to play football. The Frenchman was the spine of the Arsenal team and captained them for several years, including the famous Invincible seasons. He retired in 2011 after playing for clubs such as AC Milan, Inter Milan, Juventus, and Manchester City.

After this, he ventured into a management career. Vieira started his managerial career at Manchester City academy. Then, after spending two years in England, he got his first job at New York City FC, a part of the City Football Group. Under his tenure, New York City FC’s position in the Eastern Conference rose from eighth to third.

Vieira’s next assignment came at Ligue 1 club Nice. In his second season, he helped the club finish fifth. However, a run of poor form in his third season led to his sacking. He then took the reins at Selhurst Park, helping Crystal Palace to a 12th-place finish. Currently, the Eagles are 13th in the table, taking 13 points from 11 matches.

The best in business: Every nation’s best player at the 2022 World Cup

While many fans would not have heard of Pitso’ Jingles’ Mosimane, he is perhaps the most successful black manager in football. The South African has won a record 18 trophies and is considered one of the most prominent managers to come out of Africa.

Mosimane started his playing career in 1982 and played for 14 years across six clubs. While he won nothing of note as a player, this has not been the case as a manager. Mosimane started his career in his native country with Supersport United in 2001. Over the next six years, he won two trophies.

His next destination was the South African national team, where he served as assistant manager to Carlos Alberto Parreira and Joel Santana. And he was given charge of the national team after the 2010 FIFA World Cup.

However, it was at his next club where Mosimane established himself as one of the best managers in Africa. In eight years, he won 11 trophies, including five league titles. His peak came between 2017 and 2020 when he won three consecutive league titles.

This caught the attention of the Egyptian club Al Ahly, who signed him to win silverware. Mosimane didn’t disappoint, winning five trophies in two years, including two CAF Champions League.

The only black manager in Ligue 1, Antoine Kombouare, is one of the notable black managers in European football. Born in Noumea, New Caledonia, a French overseas territory, Kombouare started his playing career for Nantes in 1982. He would then switch clubs and join Paris Saint Germain. He won one Division 1 title in the French capital, two Coupe de France, and one Coupe de la Ligue.

He would join the Swiss club Sion where he would win the Swiss Cup. Kombouare retired as a player in 1997 and went into management. Starting his career with PSG B, the Frenchman climbed his way to the top, managing clubs first in Ligue 2 before being appointed in the top flight.

He has won three trophies in his managerial career, which includes one Ligue 2 and two Coupe de France.

REPRESENTATION | Aspiring black coaches and managers can look to Ligue 1 and see guys that look like them in position.

Henry’s appointment at Monaco makes him the third black manager in France’s top flight alongside Antoine Kombouare at Guingamp and Patrick Vieira at Nice. 👊🏾 pic.twitter.com/OmuQBE57jw

A fan of beer while watching a football match? Read this to find out the alcohol laws in Qatar

Valerien Alexandre Ismael is a name which fans in England will be familiar with due to his stint at West Bromwich Albion. Valerien Ismael has had a respectable career both as a player and manager. Ismael started his footballing journey with Strasbourg in 1993. He would spend five years at the club before embarking on a journey that would take him to six clubs in 10 years.

Ismael would play for Crystal Palace, Lens, Werder Bremen, Bayern Munich, and Hannover 96 before retiring in 2009. His managerial career started with the Hannover 96 II. He would spend his first years in Germany managing clubs such as Nurnberg and Wolfsburg.

Ismael would then leave Germany for Cypriot club Apollon Smyrnis F.C. Over the next few years, he would manage LASK, Barnsley, West Brow, and Besiktas. However, he was sacked in October 2022 after a string of poor results.

Ezra Hendrickson is a name that is familiar to all Major League Soccer (MLS) fans. The Vincentian is one of the few black managers to ply his trade in North America. Born in Layou, Saint Vincent and the Grenadines, Hendrickson’s parents moved to the USA when he was young. He played his entire career in the USA, making more than 300 appearances, most of which came in his six-year spell with the Los Angeles Galaxy.

He retired in 2008 after making his last appearances for Columbus Crew. After this, he ventured into a managerial career, with his first stint coming as an assistant coach at Seattle Sounders FC. After being in the role for five years, Hendrickson was promoted to the team’s head coach. Between 2015 and 2018, he acted as the club’s head coach while also being an assistant coach for Saint Vincent and the Grenadines national team.

Currently, he manages the Chicago Fires.