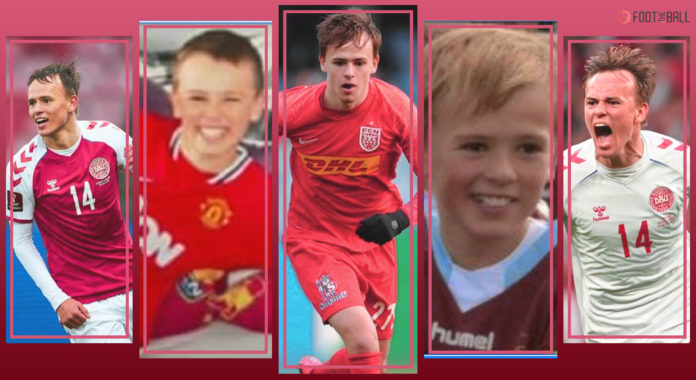 Mikkel Damsgaard is a Danish midfielder who had taken Euro 2020 by storm. The youngster had helped Denmark recover from the shocking cardiac arrest incident of Christian Eriksen. The Sampdoria attacking midfielder/winger stepped up to fill Eriksen’s massive boots and led his country to the semi-finals of the tournament where they lost to England.

A versatile player, Damsgaard can play anywhere across the frontline. The 20-year-old has good technique, skill, and everything required to be the next Danish superstar. As the 2022 summer transfer window gets into the final stretch, teams are tracking the situation of the Danish attacker at Sampdoria. FootTheBall take you through the best unknown facts about Damsgaard.

Damsgaard hails from the Danish town of Jyllinge. Jyllinge is a beautiful fishing city located on the eastern shores of Roskilde Fjord. It has a modest population of around 10,000.

Damsgaard was born and brought up in Jyllinge. He has received his primary education at the local Jyllinge School. It was during his schooling days that he developed an interest towards football. He recaps how he used to play football with his friends at the school ground.

Mikkel’s entire family is a football fanatic one. His father Henrik coaches the local Jyllinge team. It was Henrik who coached Mikkel initially. He honed his son’s basics as strongly as possible. Mikkel was so impressive that a scout who came for a different player ended up signing him for FC Nordsjaelland.

Damsgaard also has a mother and sister whose details are undisclosed currently. But it is learnt that they are also huge fans of the game.

3) A UNITED FAN GROWING UP

Damsgaard was an ardent Manchester United fan in his childhood. The millennial kid might have missed his country legend Peter Schmeichel’s entire tenure at United. But somehow he found his love in Manchester.

Who knows if he can turn up and play for them one day. With Damsgaard’s infinite potential, the sky is the limit.

Damsgaard was the youngest member of his FC Nordsjaelland. Out of love for their youngest first-teamer, they have nicknamed him “ Il Ragazzino”. The word roughly translates to “The Little Boy”.

His Sampadoria fans have grown fond of his nickname. They continued the nickname and addressed him as the Ragazzino in their later games.

Damsgaard was born on July 3rd 2001. The past couple of years has seen his stock rise exponentially. He earned a call-up to the Euro 2020 and got an unexpected chance owing to Eriksen’s shock cardiac arrest on the pitch.

He went on to score the opener in the final group game and also scored against the Three Lions in the semi-final.

Despite being only 22 Damsgaard has a documentary dedicated entirely to him. He joined Nordsjaelland as a teenager in 2013 and graduated through their academy. He made his first-team debut in 2017. As a move to Sampdoria was agreed, it ended a seven-year stay with the club.

Damsgaard was so special to the club they decided to make a documentary of his career there starring himself. In the mini-documentary Damsgard, his parents, and coaches can be seen. They recount various experiences and memories with Damsgaard. The documentary is titled “ Il Ragazzino” on the club’s youtube handle.

Damsgaard is single and not dating anyone currently after turning 22 recently. The youngster has always wanted to focus on football and prosper in his career.

It is also possible that he is keeping his relationship a secret. He has never revealed anything officially on his social media. But there can be a secret girlfriend for the next superstar.

Unlike many millennials, Mikkel Damsgaard is not a social media bee. It is evident from his Instagram handle. The account was created as recently as 2020 when he was 19 years old. His first post was confirming his move to Sampdoria. Few posts with the national team also pop up on his timeline regularly.

When it comes to Twitter, he doesn’t even have an account. He is mentioned and retweeted more in the past few days. He might think about creating a new account and cash in on this hype.

His game at the Euros is garnering great interest from football’s elite. Tournaments like these act as perfect platforms for players to shine and the scouts to do their thing. Damsgaard’s skill set and versatility make him a perfect fit for many top clubs.

Giants like Barcelona and Tottenham Hotspurs are said to be queuing for his signature already.

Daamsgaard made his debut into the world of FIFA and PES after his move to Sampdoria. Since the Danish league isn’t covered by the game, they become interested once he made his move permanent in the Serie-A.