LA ROJA TAKE ON THE CHECKERED ONES 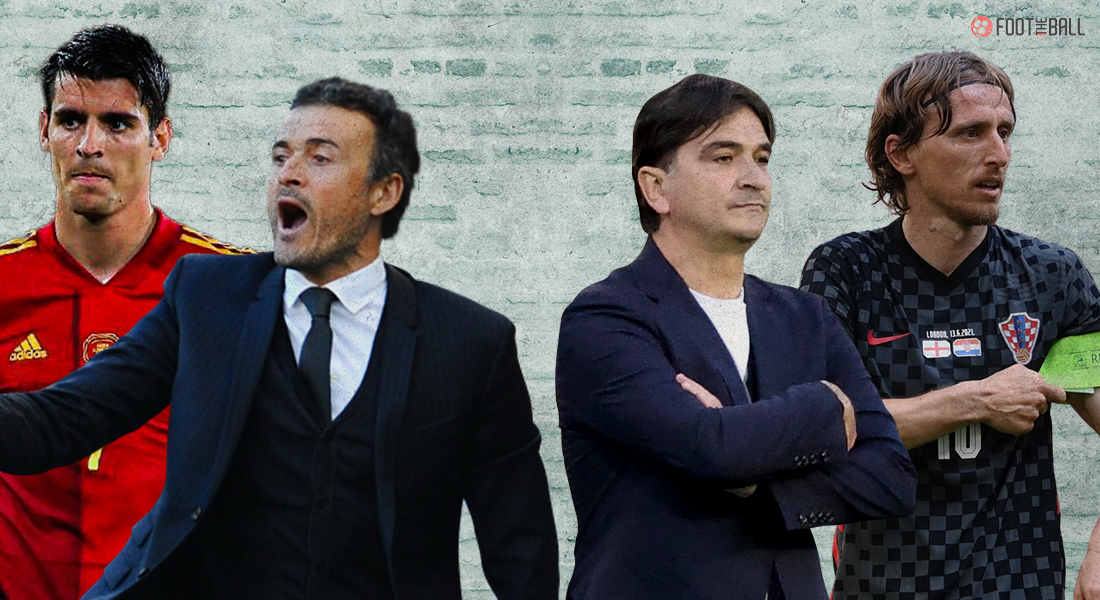 Spain meet Croatia in the Euro 2020 round of 16 clash at Parken Stadium in Copenhagen. Both sides cliched knockout spots on the final matchday with thumping victories. Having recovered from a sluggish start in the group stages both Spain and Croatia finished the group stages well to finish as runner-ups in their respective groups.

👋 Hola, @SeFutbol – see you in Copenhagen!

Luis Enrique’s Spain squad had a rich mix of youth and experience. Although they missed important figures like Sergio Ramos and Ansu Fati they were expected to pack a punch. To everyone’s surprise, the La Roja looked blunt in attack. For all their ball possession and neat passing, they failed to take the chances created. They had two uninspiring draws against Sweden and Poland. A victory could’ve sealed their qualification in their final game. A horrendous own goal from Martin Dubravks opened the floodgates for Spain as they scored five goals on the night.

Spain came under mild criticism from their media for not firing at the Euros. Enrique pointed to the fact that they were the best statistically in chance creation. They can be nicknamed the xG champions eh? They scraped their way as sloppy runner-ups to the knockouts. Spain would be hoping to end their round of 16 jinx as they exited their two previous major tournaments at that stage.

👀 Goal of the Round 𝗖𝗢𝗡𝗧𝗘𝗡𝗗𝗘𝗥?

On the other side is Zlatko Dalic’s Croatia. The Croatian’s entered the tournament as dark horses once again. They were expected to build on their surprising run to the World Cup final. However, they lost their stars Ivan Rakitic and Mario Mandzukic to retirement. Luka Modric was the one they looked onto for inspiration.

They looked lost at sea in their opener against England. A similar dull performance was seen against the Czech Republic. Under tremendous pressure, their seniors Modric and Ivan Perisic stepped up to seal their knockout berth against Scotland. Keeping the group stages behind them, they must be looking for a solid run in the knockouts.

Spain were hit with a covid outbreak just before the tournament. Sergio Busquets was sidelined and was forced to quarantine himself. Without their captain, their gameplay took a hit expectedly. Before the crucial knockouts, they have a full squad ready for selection.

Busquets who returned to the side against Slovakia was immense again in the middle of the park. Koke and Pedri added the forward drive from midfield. Thiago Alcantara is a potent weapon on the bench who might be called upon for the Croatia clash to win the midfield battle. Ferran Torres had a goal in that clash off the bench. He makes a strong case for inclusion in the starting eleven.

Croatia looked for inspiration from somewhere to find goals. It came in the form of the impressive Nikola Vlasic. The playmaker was deployed on the right-hand side as a winger and scored their opener against Scotland. He might be expected to keep his place in the attack. Croatia should be wary of the yellow cards carried by their midfield engines Mateo Kovacic and Marcelo Brozovic. They have no injury concerns as such.

🔥 That feeling when you open the scoring in a #EURO2020 group stage decider 🔥#BeProud | #Vatreni | #CRO pic.twitter.com/coJOorAIDO

The Villarreal striker came into the Euros on the back of his best season personally. He scored 30 goals in all competitions as he fired the Yellow Submarine to an unlikely Europa League triumph. He was handed the number nine shirt in the squad for the Euros. Moreno was expected to play a huge role in not only scoring but also their build-up play.

Moreno started the tournament well but wasn’t able to score in the opener against Sweden. He missed a penalty that could’ve been the winner against Poland. Nevertheless, he has registered two assists and remains a key player in chance creation. It’s only a matter of time before the sharpshooter finds the back of the net.

Croatia’s Brozovic and full-backs must be alert as Moreno tends to drop into the midfield and drift wide often and creates space for others to attack.

With each day passed Modric is only getting better. The 35-year-old Real Madrid superstar has turned the clock with a vintage display against Scotland. He scored a fantastic outside of the boot shot from outside the box to give them the lead for the second time. Croatia would again bank on their Starman to get them across the line against Spain.

👟✨ A fantastic strike by #CRO captain @lukamodric10 against Scotland is among the #EURO2020 Goal of the Round nominees!

Share your thoughts on this piece of magic and vote 👉 https://t.co/BLVKkpJywf#BeProud | #Vatreni🔥 pic.twitter.com/Za3ixPyWdm

Modric would be the key to unlock a stubborn Spanish defence. He has to beat a dogged Sergio Busquets in the midfield first before scheming how to pick the defence.

Neither side has played their best football at the Euros yet. The round of 16 provides the best platform for them to fire and prove their title credentials. Besides Croatia and Spain, both exited the Euro 2016 at this stage. They’d be determined to go behind that stage now.

Both sides love to play the game slowly. They pass and pass until the opposition makes a mistake and then pounce. We can expect Spain to have more of the ball and dictate the proceedings. In a game between two solid defences, one goal could make all the difference. FootTheBall expects Spain to edge Croatia 1-0 due to their superior star quality.