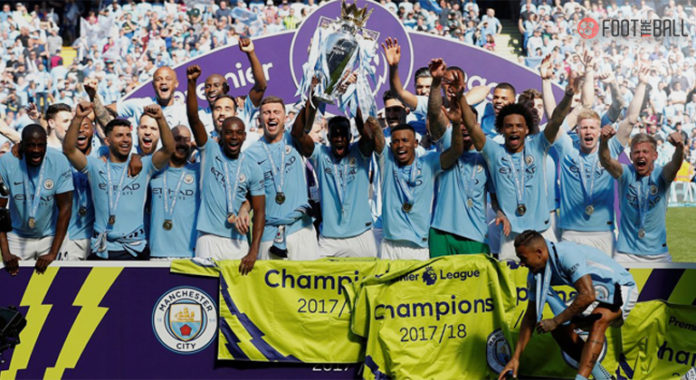 The Premier League is considered by many to be the best football league in the world. Over 38 matches, 20 teams fight it out to become the champions of England. The Premier League is the most watched in the world and has become famous for its fast, physical style of play. On top of that, several top clubs such as Manchester City, Liverpool, Manchester United, and Chelsea ply their trade in the league.

All these factors make it very difficult for any team to win the Premier League. One slip-up (don’t ask Steven Gerrard) and a team’s title chances fade away. And hence, teams usually need a lot of points to become champions. Sometimes even 90 points are not enough to win the league.

So, here are the teams that have amassed the most points in a Premier League season.

Most points in a Premier League season

After Jose Mourinho won back-to-back titles with Chelsea, there was pressure on Sir Alex Ferguson to respond. And he did it in style, guiding Manchester United to three consecutive titles. The third was the most impressive as United scored 90 points, fending off a fierce challenge from Fernando Torres, and Steven Gerrard led Liverpool. United’s defence was the best in the league as they only conceded 24 goals. It would also be Cristiano Ronaldo’s last season at the club, after which he would join Real Madrid for a then record fee.

The famous Invincibles season. In 2003-04 the Premier League was dominated by Arsenal and Manchester United. The two teams were battling it out for the title, but in 2003-04, Arsenal would blow everyone out of the water. Arsene Wenger’s men created history as they won 26, drew 12 and lost no match. This was the first and, until now, the only time a club managed to complete an entire season without losing a single game. The star of the show was Theirry Henry and Dutch playmaker Dennis Bergkamp. It was the last time Arsenal won a league; however, their form suggests they could be a significant title contender this season.

When Jose Mourinho signed for Chelsea, he was tasked with making Chelsea a force in the Premier League. And the Special One didn’t disappoint, bringing in two Premier League titles. The second came in 2005-06, where Chelsea secured 91 points. Frank Lampard was the top scorer in the league, while Didier Drogba scored 12 goals and provided 11 assists, the most in the league. Chelsea’s defence was also the best in the league conceding only 22 goals.

Another Haaland? Who is Andreas Schjelderup, the Norwegian scoring goals for fun in Denmark

Coming into the 1999-2000 season, Manchester United were on cloud nine. The club had won a treble the previous year and were looking to keep their dominance intact. And they did just that in the following season. Manchester United won an impressive 91 points, 18 more than their nearest rival. In addition, United scored an impressive 97 goals, with strikers Dwight Yorke and Andy Cole scoring a total of 39 goals. Meanwhile, David Beckham was the creator-in-chief, providing 15 assists, the most in the league.

The 2016-17 season was one of the most impressive in recent memory as a host of star managers had taken charge in the league. Pep Guardiola, Jurgen Klopp, Jose Mourinho, Arsene Wenger, Mauricio Pochettino, and Claudio Ranieri competed for the Premier League title. And it was under such circumstances that Antonio Conte led Chelsea to the title. The Italian formed a strong three-person backline which became the base of Chelsea’s success. Diego Costa and Eden Hazard were the attacking stars scoring a combined total of 36 goals, while Thibaut Courtois kept 16 clean sheets, the most in the league.

6 years ago this match day, Conte’s Chelsea conceded 3 versus Arsenal.

They went on a 15 game winning streak, and won the PL with 93 points…

We have already covered Jose Mourinho’s second league title, but his first was more impressive. In 2004, Jose Mourinho had just arrived at the club from Porto, whom he had led to a miracle Champions League title. And the Special One did just that. The Blues amassed an impressive 95 points losing only one match. On top of that, they only conceded 15 goals, a Premier League record for the least goals allowed in a season that still stands.

Football is in my genes. The top 10 father and son duos in football

Imagine you score the fourth most points in a Premier League season and still not win the title. This is what happened in 2018-19 when Liverpool battled it out with Manchester City for the title until the end. Jurgen Klopp’s men scored 89 goals and conceded 22, the least in the league. Sadio Mane and Mohamed Salah scored 22 goals each, while Alisson kept 21 clean sheets, the most in the league. However, it was not enough for them to win a title.

The most points won (97) & games won (30) without winning the PL as they were edged out by Man City pic.twitter.com/OuWb6WmJjp

The reason Liverpool didn’t win a title even after scoring 97 points was Manchester City. The club had already won the league the previous season but now faced a Gegenpressing inspired Liverpool who gave them the fight of their life. However, City held their nerve and won the title after going on a 15-match winning streak. Sergio Aguero and Raheem Sterling contributed 38 goals while Ederson kept 20 clean sheets.

Liverpool had seen themselves scoring 97 points and still miss out on the title. So, the following season they went better, scoring 99 points to win their first Premier League title. The Reds remained undefeated at home, winning 18 and drawing just one match. Throughout the season, Liverpool were in a league of their own and finished the season 18 points ahead of Manchester City, their nearest rival. Mohamed Salah and Sadio Mane were against the heroes, scoring 37 goals.

Pep Guardiola’s first season in the Premier League was well below expectations. Manchester City had finished third in the league, and people were already questioning Guardiola’s tactics. What happened next is history. Manchester City crushed all of their opposition, going on an 18-match winning streak to score 100 points.

This was the first time a club had amassed 100 points in the league’s history. The team scored 106 goals and conceded 27 goals, the best league record. It remains the record for the most points in a Premier League season, and it’s unlikely it will ever be broken.