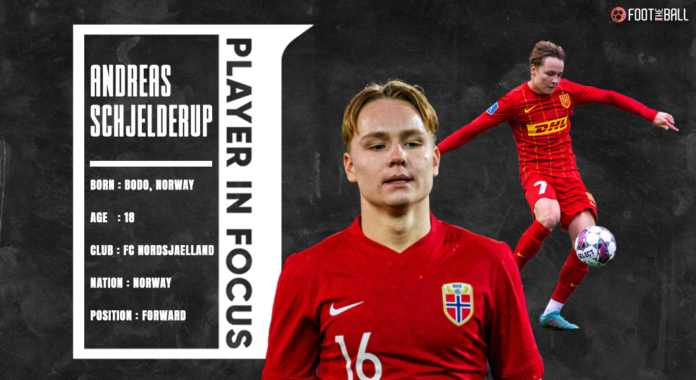 Something has gone in the footballing waters of Norway in the past few years. They had always been the plucky underdogs. The small, unassuming nation was capable of an odd upset, but could never be considered a contender for the biggest prizes. The narrative is slowly changing. The word “Golden Generation” is thrown around with some abandon in international circles. Be it Belgium’s Golden generation, Brazil’s exciting crop of youngsters or even Croatia’s fairytale runs, more often than not, they flatter to deceive.

How good is Andreas Schjelderup?

Denmark’s FC Nordsjaelland has become something of a breeding ground for wonderkids. The Danish club’s stats and numbers-driven philosophy have enabled them to become one of the smartest clubs in Europe. In Andreas Schjelderup, they have the crown jewel of their academy. Andreas Schjelderup is the kind of talent that puts the club’s youth academy on the map.

The Norwegian youth international Andreas Schjelderup (18) is without a doubt one of my favourite talents outside of the Netherlands. He just scored twice against Randers FC, which makes him the topscorer of the Superligaen. pic.twitter.com/i00nmVUM9Y

Schjelderup came through the ranks at FC Nordsjaelland and after being thrown into the deep end (Debut at 16 years 248 days, 13th youngest in Danish league history), he came out with flying colors. His age-18 season has been a breakthrough for him. The youngster was coveted by every major European club when he was in the youth sectors of another overachieving underdog, Bodo/Glimt. His choice to sign for unassuming FC Nordsjaelland is already paying off.

Schjelderup’s stats need to be looked through a filter. He didn’t start off as a centre-forward in his youth days. He mainly played as an advanced midfielder who would pop up at opportune moments to score.

However, coaches quickly recognised his “Smell for the goal” and pushed him further forward. The results have been frighteningly good this season.

Andreas Schjelderup has scored seven goals in 11 appearances this season playing as a centre-forward. That smell for goal has translated into the end product with this position change.

This breakout has been building up for a while. He scored three goals in seven games in his debut season. In the following season, he scored just three in 19 as Nordsjaelland struggled against relegation. However, that match experience would prove to be invaluable. The mental toughness needed to be in a relegation scrap at just 17 years of age has helped him come leaps and bounds in men’s football.

Schjelderup has transformed into a perfect modern, versatile forward. He is capable of playing across the front line but if not the centre forward, he likes playing on the left.

From there, he comes in on his preferred right foot and looks for shooting opportunities.

He has also played as a No10 in his short career where he looks to play the role of a “Shadow Striker”. This role is similar to that of a “Raumdeuter“, where the player in question is a midfielder in name only. On the pitch, their anticipation and sense of space help them pop up in the box at the perfect moment to score.

At his best, Schjelderup can become a spearhead of an attack of a team that plays on the front foot, presses from the front, and needs their striker to be involved in buildup play too. That skillset makes him perfect for all modern Gegenpressing teams.

Inevitably, when a youngster performs well in a league outside top-5, he attracts the “Sharks”. As the modern transfer market goes crazy with prices and salaries, potential bargains to be had in lesser-known leagues are worth their weight in gold.

It is now scarcely believable that RB Salzburg bought Erling Haaland from Norway for a measly sum of £7.20 million. Today, Haaland is easily worth almost FOURTY times that! With proper coaching and the right career choices, Schjelderup has a chance to reach that kind of potential.

The first to register an interest, unsurprisingly, have been the clubs from the quasi-Super League, the Premier League. As per reports, Liverpool and Arsenal have been locked in a battle for who many call, “The Next Haaland” due to his Norwegian roots.

“Of course, it was hard (turning down Liverpool), because when you grow up, you watch the big names and then you hear that they want you, so your head starts to spin. I got a lot of help from my father and agents, who helped me make the right decision.” pic.twitter.com/nqpxXj5k8n

The English first division spent more in the last transfer window than the four leagues below them combined. Most of it was down to the fact that English clubs prefer to splurge on finished products. That strategy is quickly becoming untenable as other clubs know of the vast riches of the PL and don’t miss out on rinsing them off it.

Going for hidden gems before they explode is the way to go in the future.

Haaland and Mbappe are destined to rule the footballing world for the next decade or so. However, football is richer for the presence of Andreas Schjelderup, who can spearhead the next line of wonderkids for club and country. For now, he aims to continue his rich vein of form at the club level, looking for an international debut, and then the battle for his signature will intensify next summer.