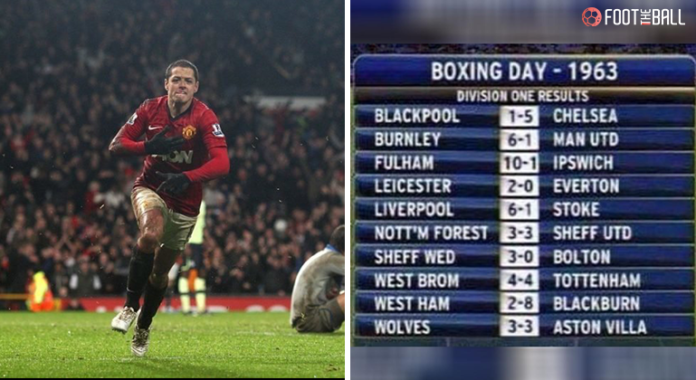 The Premier League is all set to be back just a week after the final of the 2022 FIFA World Cup. However, while other significant leagues will be back after the new year, the Premier League has not bucked its tradition of playing a match on Boxing Day. Boxing Day is a tradition that starts a gruelling schedule;e where all; 20 teams of the English top flight play at least three times between December 26 to January 1.

And this phase has many times in the past decided where the Premier League trophy has landed in May. While this gruelling schedule has always invited the ire of players and managers who have said that it causes a lot of injuries

Celebrated referee Howard Webb who has officiated matches such as the 2010 Champions League and FIFA World Cup final, said that players would ask him to book them so that they could be suspended for games during this period.

However, despite all that, Boxing Day has given us some pretty incredible clashes, and we take a look at the best five of them all.

The North-West Derby has always been a highly charged, emotional game because it is played between the two most successful teams in English football history. And in 1978, this clash provided us with one of the best Boxing Day matches of all time.

Coming into the match, Liverpool had failed to score in their last five visits to Old Trafford. The Red Devils had denied Liverpool the chance to complete a treble two seasons back by defeating them in the FA Cup.

And the Reds exacted their revenge in style, scoring three past United. Ray Kennedy, Jimmy Case, and David Fairclough were the scorers. Fairclough’s goal was a fantastic solo effort and even attracted applause from the home fans.

One of the best Boxing Day fixtures of all time. In 2002, Bolton Wanderers welcomed Newcastle United, and the match was one crazy affair. Within 10 minutes of the start, the game witnessed three goals. First, Jay Jay Okocha scored in the fifth minute before Alan Shearer levelled things up. However, Bolton immediately took the lead through a fantastic free-kick from Ricardo Gardner. From there, Bolton put their opposition to the sword, adding two more goals from Michael Ricketts.

It looked plain sailing for Bolton, but Newcastle came back striking hard. Shola Ameobi made the score 4-2 before a ferocious 25-yard striker from Alan Shearer reignited Newcastle’s desire.

With their backs against the wall, Sam Allardyce’s men defended resolutely and took all three points.

Under the legendary Alex Ferguson, Manchester United were a team that made comebacks for a living. And one of those instances came on a Boxing Day match when they welcomed Newcastle United to Old Trafford. This was a match when United came back not once but all four times.

Newcastle took the lead through James Perch in the fourth minute, after which United took the attacking stance. It paid off 20 minutes later when Johnny Evans found the back of the net. However, when it looked like United would take the lead, Evans, who scored their equaliser, scored an own goal. As a result, Newcastle went into the halftime lead 2-1.

Like most of the first half, the second half started for United, chasing the game. However, their patience paid off as left-back Patrice Evra’s shot found the bottom corner to level the match again before Papiss Cisse gave Newcastle the lead.

A game that deserved no losers, which is why the scoreline does justice to both teams, with eight goals and three red cards. In 2007 Aston Villa came to Stamford Bridge and shocked the Blues by taking the lead through Shaun Maloney. To make matters worse, a Peter Cech mistake helped Maloney double the lead. However, a horrendous tackle by Zat Knight gave Chelsea a penalty and Knight a red card. Andriy Shevchenko converted the penalty as Chelsea pulled one back before halftime.

With Villa down to 10 men, Chelsea equalised in the 50th minute before taking the lead in the 66th minute. However, out of nowhere, Aston Villa equalised. Chelsea were handed a red car of their own as Ricardo Carvalho was given his marching orders. Despite this, Michael Ballack gave Chelsea the lead in the 88th minute.

With minutes left, however, Ashley Cole’s handball gave Villa a penalty, and Gareth Barry scored it to end one of the best Boxing Day matches ever.

One of the highest-scoring English fixtures of all time, Fulham’s 10-1 win over Ipswich Town remains one of the best Boxing Day matches ever. That Boxing Day was a scoring fiesta, with 66 goals in the ten matches. Chelsea thrashed Blackpool 5-1 on the road, while Burnley and Liverpool recorded 6-1 wins. West Bromwich Albion and Tottenham played a 4-4 draw, while Nottingham Forest and Sheffield United played a 3-3 stalemate. Blackpool also put eight past West Ham on the road while Wolverhampton Wanderers and Aston Villa played a six-goal 3-3 thriller.

Coming back to the Fulham game, the home team raced to a 5-1 halftime lead. By the end of the match, Graham Leggat had scored four while Bobby Howfield added three goals to his name.