Environmental Danger At The Euros 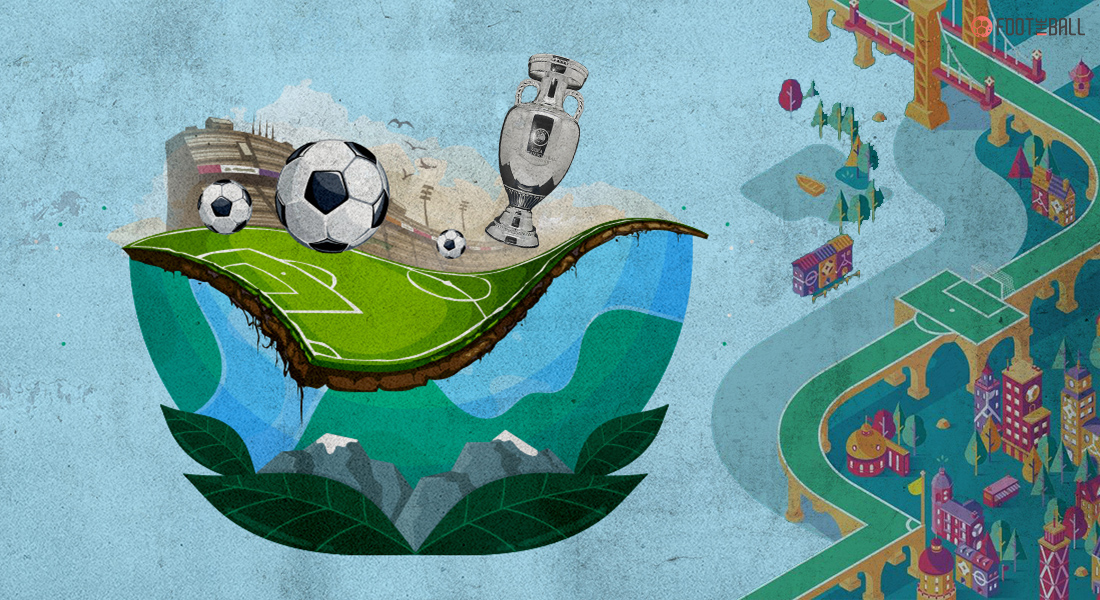 Euro 2020 is coming closer after a long wait and fans can’t wait to get to stadiums and watch their nations perform on the big stage and make them proud. It will be the first edition of the Euros with more than two host countries. Instead, 11 countries are hosting the pandemic-ridden event this time and despite all the challenges, the Euro 2020 is at last kicking off from 11 June 2021.

The tournament has been under scrutiny recently for the damage it is predicted to cause to the environment mainly due to the teams and their fans travelling across the continent.

The hosts are spread from Sevilla in the west to Baku in the eastern end of Europe, almost 4800 km away with the rest scattered between them. A recent report gave a detailed study about the carbon emissions that will be emitted during the course of the tournament and has caused a major uproar among climate activists.

WHAT ARE THE MAJOR CONCERNS?

Greenhouse gases are considered the root cause of global warming, and air travel is one of the key contributors to the gross greenhouse gases emitted. Climate activists and experts have time and again warned about the catastrophic effects of global warming on the planet but there aren’t any serious steps being taken towards curbing the emission of such gases.

Aviation also contributes to the global carbon emissions, albeit a lower percentage comparatively, but it is disproportionately divided. A small percentage of regular fliers cause more collective damage to the environment on one return trip from London to New York than that by a person living in a third world country in a year.

Euro 2020 hosted by 11 countries worsens the situation even more as there is continuous travelling by teams, staff and fans will be mostly by air. Out of the 15 Euro tournaments held in the past, 12 were hosted by a single nation and shared between two host countries on three occasions. With covid restrictions in place, the touring fans will be lesser in number during the tournament, but it is still predicted to be a large number.

Good luck to all #U21EURO @UEFAUnder21 teams & thanks to @UEFA for an exemplary #CleanerAirBetterGame campaign!

Although the UEFA sold this concept as a one-off to celebrate 60 years of the first European Championship with innovation and inclusiveness, the tournament is a huge cause of concern for climate activists.

In September 2019, the UEFA president Aleksander Ceferin accepted and acknowledged the fact that football hadn’t done much for the environment with the influential power and financial capability of the sport. The organisers promised to make the tournament environmental friendly but the experts are not convinced.

MASSIVE EMISSIONS PREDICTED AT THE EURO 2020

In the Euros hosted by single nations, the emissions are comparatively much lower as the transport becomes less dependent on air as trains and other land modes of transport become more viable. With the longer distances and multiple hosts, more and more travelling will be done via air.

A recent report revealed the drastic change in the carbon footprints of several teams and their fans will produce as a result of multiple nations hosting the tournament. The report based its calculations based on the UEFA seedings, which means the teams seeded higher will beat the lower-seeded side. It means Belgium will be winning the final against England. Germany and Ukraine are to be the other semi-finalists. Switzerland, Poland, Spain and Italy are to be knocked out in the quarter-finals while Turkey, Austria, Portugal, Croatia, France, Russia, Denmark and the Netherlands go out in the round of 16.

The remaining teams went out in the group stages being the lowest-seeded teams of the respective groups.

According to the seedings formula, a Swiss fan following the team at every match till they get knocked out in the quarters will have to travel approximately 20,377 km, which is more than what the fans of any other teams based on seedings.

🌏 💚 UEFA is supporting #EarthHour 2021 and taking action against air pollution with our #U21EURO campaign, #CleanerAirBetterGame.

Air pollution is a threat to our planet, our health and the game we love. #CleanAirEU #CountUsIn

Turkey, Ukraine, Poland, Belgium, Wales, Austria, Slovakia, Sweden, Portugal, Germany and Spain are the other 12 teams who are predicted to travel more than their previous appearances. On the other hand, Croatia, North Macedonia, Russia, Denmark, Italy, France, Czech Republic, England, Finland, Hungary, Scotland and the Netherlands are the least travelling teams at the tournament according to the report.

The Netherlands is the least travelling side according to their seeding with only 720 km, playing all their group games at home and getting eliminated in the round of 16 in London.

UEFA ACCEPTS FLAWS AND PUTS FORTH THE POSITIVES

According to the UEFA, they are “committed to ensuring sustainability” of the Euro 2020 and have taken certain measures to combat the carbon flight emissions taking all the fans, teams and officials into consideration.

🇸🇮 🏆 🌲 To celebrate hosting the #U21EURO and as part of UEFA's #CleanerAirBetterGame campaign, children and adults in Celje, Slovenia have planted trees to represent the 16 nations taking part in the tournament.

👇 You can get involved and help tackle air pollution too!

The organisers gave a rebuttal to the experts’ claims, while also accepting the drawbacks. They pointed out the measures that have been taken to ensure compensation for the environmental loss due to Euro 2020. The organisers have promised to plant at least 50,000 trees in each of the host cities to leave a “lasting legacy”.

UEFA said that they ensured the leading nations in the competition, who attract the most number of fans, such as — England, Germany, Italy, Spain and the Netherlands, play their group matches at home, so the number of travelling fans can be substantially reduced and the carbon footprint of the tournament can be significantly reduced.

They also pointed out the fact that the tournament will see only one new stadium built as compared to the four new stadiums built in the previous edition held in France.

The Puskas Arena in Budapest is the only brand new stadium for the tournament. Building new stadiums is one of the major contributors to any such tournament’s carbon footprints keeping in mind the energy, concrete and other resources spent, which is majorly spared by this, said the UEFA.

According to UEFA, the carbon emissions during the Euro 2020 will be lesser compared to the Euro 2016. They have estimated the gross carbon emissions over the duration of the Euros to be 425,000 tons. The previous edition held in France produced 517,000 tons of emission as per the organisers.

UEFA’s new campaign for the #U21EURO aims to raise awareness of the threat of air pollution to our health and our game. Find out how to make a difference: 👇@EU_ENV @CountUsInSOCIAL #CleanerAirBetterGame #CleanAirEU #CountUsIn

In further comparison, the 2018 FIFA World Cup hosted by Russia in 11 of its cities produced almost 1.5 million tons of emissions according to the reports released by the organisers with 32 participating teams. At the Euro 2020, there will be 24 participants.

UEFA, as a signatory of the UN Sports for Climate Action Framework, have reiterated their commitment towards sustainable sports events and also announced free public transport for the ticket holders to avoid the usage of personal vehicles. The UEFA says they are prioritising waste management and waste reduction in stadiums to achieve their sustainability goals.