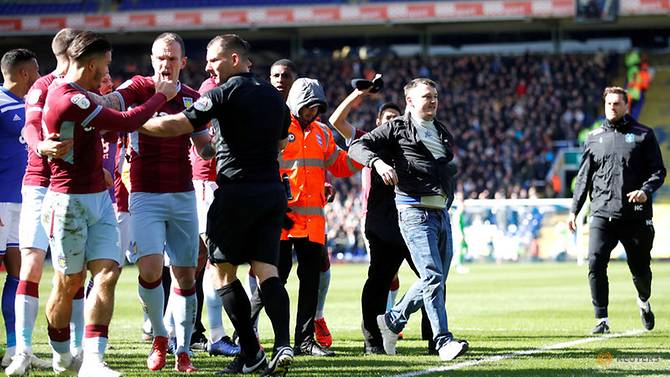 Daniel Fitzpatrick, Lecturer in Politics, Aston University is the author of this article which was originally published in The Conversation, an independent source of news and views from the academic and research community.

British football is once again under the microscope for all the wrong reasons. In the tenth minute of the Second City Derby between Birmingham City and Aston Villa on March 10, a Blues supporter evaded stewards, ran on to the pitch and attacked Villa’s captain Jack Grealish. The assault came less than 48 hours after an altercation in which a Hibernian fan confronted James Tavernier of Rangers in the Scottish Premiership. This was soon followed by another pitch invasion in which an Arsenal supporter appeared to shove Manchester United’s Chris Smalling.

This spate of incidents has reignited the debate on disorder in football, with new focus on the safety of the players on the pitch. Former professionals speculated on what might have happened had the offenders been carrying weapons, with the stabbing of tennis player Monica Selesin 1993 used as a cautionary tale.

The man involved in the Grealish incident, Paul Mitchell, 27, has been jailed for 14 weeks and a range of preventative measures have been mooted. The imposition of “strict liability” on football clubs for the offending behaviour of their fans – with a ladder of sanctions including points deductions and playing behind closed doors – has been suggested as deterrent by various pundits, despite little evidence of their effectiveness.

Changes to the infrastructure of stadia, including netting, moats, and even the return of perimeter fences to provide more robust physical barriers between fans and the pitch have also been proposed, despite the known risks to health and safety that these restrictions pose. These risks have been evident in successive stadium disasters and barriers have been considered unthinkable since the Hillsborough tragedy of 1989, when 96 Liverpool fans were crushed to death during an FA Cup semi-final between Liverpool and Nottingham Forest.

Former Birmingham City midfielder David Cotterill went as far as advocating the deployment of armed officers to protect players, recalling the time Bobby Robson suggested that police should “turn the flamethrowers on them”, following the violence and disorder that marred a cup tie between Millwall and Ipswich in 1978.

What is the significance of these recent pitch invasions and the ensuing debate on player safety? Do they signal a return to the “dark days” of football hooliganism?

When were these so-called dark days? The most notorious 15-year period of football hooliganism in the 1970s and 1980s was bookended by two notable interventions by the football authorities. In 1971, the Football Association closed Manchester United’s home ground, Old Trafford, for their opening two games after fans threw knives and darts at visiting supporters the previous season. In May 1985 all English clubs were banned from European competition in the aftermath of the Heysel Stadium disaster in Brussels, in which 39 people died and 600 were injured after fans were crushed against a wall that then collapsed during the European Cup final between Liverpool and Juventus.

The major change to regulation of crowd management followed the publication of the Taylor Report in 1990 in the wake of Hillsborough. While aimed at improving crowd safety, Lord Justice Taylor’s recommendation for all-seated stadia was enacted alongside a raft of other measures, including the increased use of CCTV at football stadiums as well as an extension of the legal power to ban individuals from football matches and criminalising encroachment onto the pitch.

These changes have had a significant impact on the experience of watching live football, deterring and restricting the “hooligan element” and attracting a new type of family audience.

But it’s important not to overstate the extent of change. The post-Taylor era has been punctuated by isolated episodes of serious disorder. Major crowd trouble in 2009-10 and 2012-13 led to similar soul searching about the “curse” of football hooligans and demands for it to be stamped out once and for all.

‘They think it’s all over’

Can disorder ever be totally eradicated from football? Perhaps not. But the long arc of British football is undoubtedly bending towards less violence (see graph below). The arrest rate for the whole of last season was 3.5 per 100,000 fans.

Serious violence and crime at other major events – whether large concerts and festivals or horse racing – does not seem to induce the same level of opprobrium or moral panic. The widespread media coverage of football amplifies the spectacle of disorder, leading with depressing inevitability to the type of copycat behaviour witnessed at the weekend. And the attraction of a clampdown lies in the view that football fans (as a collective group) are inherently disposed to violence.

We should guard against the urge to treat anyone who encroaches on the field of play as a threat to player safety. There are clearly very different reasons for why a fan might encroach on the pitch – to ensure their own safety, as part of a protest or civil disobedience and, of course, celebration. Only a tiny minority are malign in intent.

Indeed, it is somewhat ironic that the most celebrated phrase in English football – those immortal words: “Some people are on the pitch, they think it’s all over”, uttered by commentator Kenneth Wolstenholme in the 1966 World Cup Final – was in reference to pitch invaders at Wembley celebrating what they thought was the final whistle signalling England’s triumph.

Let me be clear – professional footballers have an unequivocal right to work in an environment free from the threat of violence. This is also true of teachers, nurses, paramedics, prison officers – to name a few professionals who face regular violence and intimidation in their workplace. But it is also accepted that it is unreasonable to expect all risk to be eradicated in these public spaces, especially when such protection begins to impinge on civil liberties.

The relevant stakeholders in football must, of course, tackle the issue of player safety. But the debate about how to police football crowds effectively needs to avoid knee-jerk reactions to isolated incidents. Engagement with fan groups and representatives – alongside clubs and police – are essential to develop more pro-social and sustainable solutions. Dialogue is a not a panacea, but it is essential for meaningful progress to continue.

Post tags:
Jack GrealishArsenalEnglandEPLJuventusLa LigaLiverpoolManchester CityManchester UnitedOld Trafford
previous post
Lionel Messi Takes A Swipe At His Critics, Says ‘It Hurts When People Lie’
next post
Love For The Beautiful Game: Of Numbers, Viewership, And Everything In Between