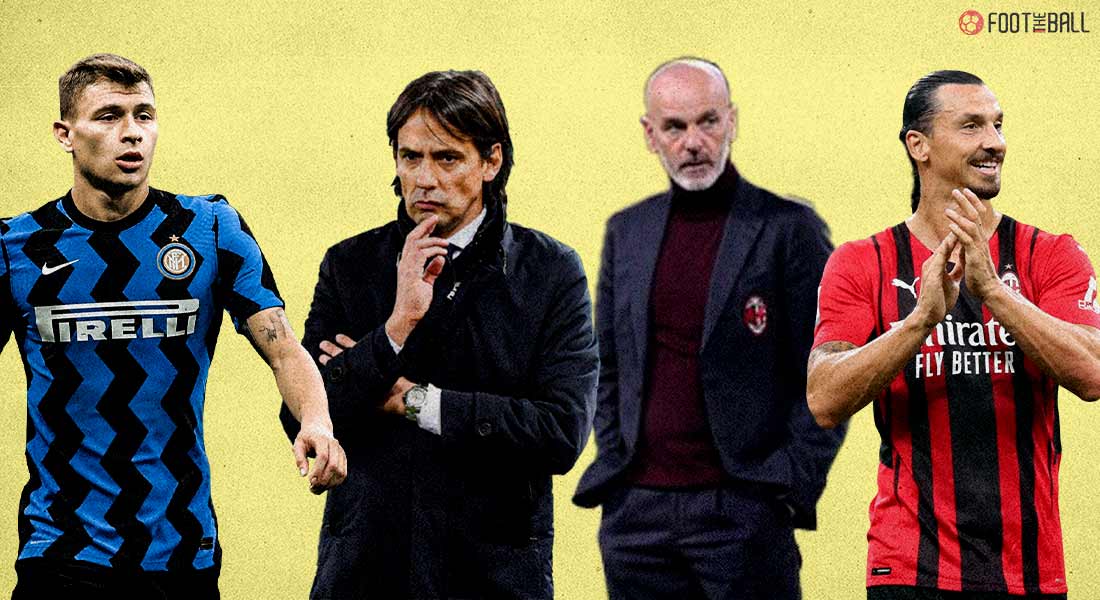 The first Derby di Milano of the season comes at a pivotal time for both clubs, with Milan in second on goal difference while Inter are seven points behind in third.

The Rossoneri have started their quest for the league title in blistering fashion, picking up 10 wins and a draw in 11 matches. Their fast-paced style of play combined with a robust defence and unerring finishing has been a real source of joy for the fans. Zlatan Ibrahimovic remains at his best, single-handedly helping in downing Roma last time out.

Two images showing how Milan are using Ibrahimovic to link up play & progress past Roma's 4-4-2 mid-block:
– Two CBs + one pivot player creating a 3v2 in the first phase.
– FBs forming a line of five in attack.
– Ibrahimovic dropping deep to receive in pockets & free up others. pic.twitter.com/qxtPFXGSrH

Behind him are the runners in full flow headed by Rafael Leao. Fikayo Tomori and Simon Kjaer are one of the best centre-backs pairing in Europe right now as Stefano Pioli expertly manages his side despite some key injuries. Though their European campaign is not going to plan, Milan will be desperate to stamp their credentials as genuine contenders against their dearest rivals.

🚨 Giroud to @Gazzetta_it: “The derby is an important match because sending Inter 10 points behind wouldn’t be bad. We could say it’s a fundamental but not decisive game and Milan have the weapons to win it.” pic.twitter.com/YPiMuGL9lI

Meanwhile, the defending champions have also been running riot with their 28 goals scored being the highest in the league. Their three draws and a lacklustre defeat to Lazio in mid-October has seen them fall off the pace a bit but it is still early days.

Simone Inzaghi has transitioned smoothly into the shoes of Antonio Conte while free-agent acquisition Edin Dzeko is the third in the Golden Boot race with seven goals already. Nico Barella is slowly making his mark as one of the best midfielders in the world as his advanced role has seen him thrive.

But in two forwards – Džeko and Tucu Correa – Inter have found a way to fill that goal quota early on. The Bosnian has 7, Correa 4, Lautaro 5 in Serie A 🇮🇹🐍

There were fears that the losses of some mainstays from last season would weaken the side but it has not been the case. Federico Dimarco, Stefano Sensi, Matias Vecino have all stepped up to the plate as they look to add back-to-back crowns.

As mentioned, Milan are without important starters in Ante Rebic and Mike Maignan. The pair joined Samu Castillejo and Junior Messias on the sidelines but a big blow came last week. Theo Hernandez’s suspension means the team will miss one of their more dynamic threats down the left.

Inter have a fully fit squad to choose from, many of the attackers having been amongst the goals themselves recently.

It is hard to look past the influential nature of Ibrahimovic in games but it is the growing threat of Leao which has made Milan a combative force. The wide attacker has four goals and one assist in the league, while his overall play has been the most impressive. Leao’s direct running, pace, and linkup play with the striker has been causing problems all season long.

MILAN IS ON FIRE 🔥🔥 pic.twitter.com/4lU5FKAhuO

Inter’s three-man backline will have their hands full dealing with Ibrahimovic’s physicality which means the right-back has to be very wary of Leao’s runs in behind. Furthermore, he also likes to come inside and play centrally when approaching the penalty area so as to overload the box. Leao’s crossing has not been the most effective at times, which is why Pioli now wants him to play the ball to feet however much he can.

His unerring finishing is also a bonus now, with Milan certainly needing goals against Inter who have been scoring freely themselves.

Dzeko has been one of the revelations of the season for the Nerazzurri, but it is his younger cohort who has been grabbing headlines as well. Barella has been enjoying more freedom in the creative midfield, with Calhanoglu shouldering the attacking intentions.

Nicolo #Barella had seven shots on goal in #InterUdinese (all in the first half) – a record for him in @SerieA_EN and a record for any midfielder in the Italian top flight this season. pic.twitter.com/cOww54JNKR

The Italian has a passing accuracy of 84% while succeeding in 83% of his tackles. Barella will look to exploit the space between Milan’s attackers and the defensive pivot which will have to be watched very carefully. One of Krunci or Bennacer needs to stay ahead of Barella as he is known for accurately threading the forward passes.

🧙‍♂️ No player has created more big chances in Europe's top five leagues this season than Nicolo Barella, with 9 in 10 Serie A appearances

👀 He only created 9 across his 36 Serie A appearances last season pic.twitter.com/HftWjz9G6m

Moreover, Barella works wonders when he is given time on the ball as evidenced throughout his career so he will look to work himself into space before weighing up his options. With two forwards playing upfront, he will have plenty of ideas as to how to make the best use of them.

These two teams have been brilliant over the past few games, though the edge in form certainly rests with Milan. FootTheBall predicts a 2-1 win for the Rossoneri.