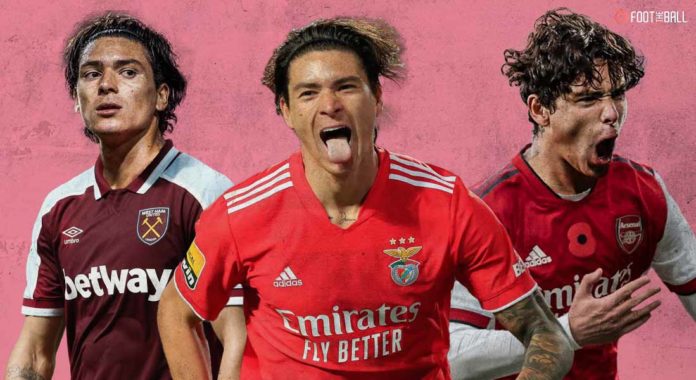 Benfica are having another strong season by their standards. Though the league title looks out of reach, they have made great strides in Europe. Benfica rattled Ajax to enter the quarter-finals and a matchup against 2019 winners Liverpool.

Their hero against the Dutch giants was a familiar name. Darwin Nunez has been one of the stars of the continent this season.

Also read: How Benfica and Ajax have remained competitive despite selling talent each year

24 goals this season across all competitions, including the winner in the second leg of the round-of-16. It is no wonder then that clubs are looking intently to make a transfer happen for Darwin Nunez this summer.

Nunez caught the eye on the back of a superlative 2019-20 season. The Uruguayan hitman scored 16 times in Segunda Division in Spain with Almeria. That was his first season in Europe after moving from Penarol. This hot form Darwin Nunez did not go unnoticed and a transfer to Benfica materialized in 2020.

Darwin Núñez, a 21-year-old Uruguayan striker, has gone to Benfica for €24m after his breakout season at Almería. He's a target man who can dribble, with good numbers already at a Primeira Liga standard. Some questions about his finishing as he levels up: pic.twitter.com/KFIolmxFSg

Though his first season was a bit underwhelming with only six league goals, there has been no stopping him this campaign. Nunez is the top scorer in the Primeira Liga, five ahead of Ricardo Horta in second place. He was an absolute terror for Barcelona in the Champions League as Benfica trounced the Blaugrana 3-0.

All of this significantly strengthens the case for a transfer sooner than later. Darwin Nunez was already the subject of a transfer bid from West Ham towards the end of January.

Other Benfica players in 6 #UCL games this season:

However, given how late the bid arrived and differences over valuation saw the deal collapse. Needless to say, the Hammers will not be alone in making a run at Nunez. There are several clubs that could do with a striker who can also play down the left wing. FootTheBall looks at the five best landing spots for Darwin Nunez if a transfer does happen.

The club who were in pole position to land Nunez with a surprising bid. West Ham are in a real dogfight for fourth-place in the Premier League currently. David Moyes has played with both a 3-4-2-1 or 4-3-3.

The positions in behind the main striker in the former and alongside Michail Antonio in the latter have been fluid. Jarrod Bowen is having a breakout season and will continue as first-choice on one flank next season.

West Ham United could make another move for Benfica striker Darwin Nunez, after having a club-record fee of £50m rejected in January. (Source: Standard) pic.twitter.com/tbB23LYCMN

This is where a transfer for Darwin Nunez helps. He can play down the left and even move into Antonio’s positions for other matches. Said Benrahma, Andriy Yarmolenko and Pablo Fornal have all struggled in finding the net often.

Therefore, going for Nunez makes a lot of sense in order to remain competitive in the coming years. However, they will have to table a significant bid in order to sign Nunez this summer.

The Gunners are can be justifiably said to be back amongst the big boys. They have the strongest chance of making it to the top-four this term. Mikel Arteta assembled a squad of young talents who are taking the league by storm. The only area of concern for next season remains the attack. Alexandre Lacazette is out of contract and not expected to sign a new one.

🇺🇾 Arsenal have began the process of signing 22-year-old forward Darwin Núñez from Benfica. He has 26 goals in 33 appearances this season. He is valued at around €80m, reports @Record_Portugal. https://t.co/hGcNLfWZLS

Eddie Nketiah is not of Premier League-caliber. That is where a transfer for Darwin Nunez makes sense. The 22-year-old is in the perfect mold for a player who wants to further his career in England. Arteta will continue giving chances to his youngsters as they have formed the core of the team. Nunez can hold the ball up, run in behind defences and score loads of goals.

The only thing that can be construed as a roadblock is the transfer fee. Having spent over a 100 million pounds last season, going for another superstar this season will be tough.

Los Rojiblancos stuttering along this season, sitting in fourth-place, 12 points behind Real Madrid. The defending champions are certainly not going to repeat as La Liga winners this season. Luis Suarez has been struggling with injuries and a severe dip in form. He should be leaving after this campaign.

Atletico Madrid are reportedly the club most interested in Benfica's striker Darwin Nunez, but will have to pay up to £67m for the 22-year-old. (Fichajes) pic.twitter.com/Dp9CSepTye

Matheus Cunha has suffered a long-term injury, meaning the onus of goals is now on Antoine Griezmann, Joao Felix and Angel Correa. None of them are consistent 15-20 goals-a-season player any more. That is where a transfer for Darwin Nunez can be effective. The attacker has played in Spain so will be familiar with the intensity and passion.

Diego Simeone is one of the top coaches in world football and can develop Nunez’s game excellently. Atletico are not afraid to spend the big bucks as everybody knows so Nunez can definitely be considered a solid option.

The sage of Erling Haaland’s future is dragging on for quite a while now. The player and his agent, Mino Raiola, are convincing the public that they are looking at a lot of things before making a decision. Whichever club he joins, Dortmund will certainly be in the market for a replacement.

🇺🇾 BILD understands that with a possible departure of Erling Haaland, Darwin Núñez from Benfica could become a concrete topic in Dortmund.

They were in advanced talks with RB Salzburg’s Karim Adeyemi but the negotiations have stalled over the transfer fee. This is where Darwin Nunez can emerge as a viable option. Granted the transfer fee here could also be a problem, but Dortmund can go for a loan-with-buy option.

Marco Rose has Donyell Malen already, and Nunez can perfectly form the core of a striking partnership for many years to come. Moreover, the club is extremely adept at developing young players so that will not be an issue either.

Granted the club’s president does not see any difference between Edin Dzeko and the departed Romelu Lukaku, but reality has to set in. Dzeko is 36-years-old and even with 12 league goals, a successor has to be found soon. Lautaro Martinez will be a fixture for the next few years and he could do with a younger cohort.

The agent of Benfica striker and potential Inter target Darwin Nunez has told @FcInterNewsit that many top clubs have made contact for the player.https://t.co/QsIQig4gkL

A transfer for Darwin Nunez will set the team up nicely for having a crack at the Serie A title in the near future. Nunez is fast, mobile and will compliment the 3-5-2 formation extremely well. He can link up brilliantly with the wingbacks and even drop a bit deep to collect the ball.

Inter have the finances to get a deal done, as the money from Lukaku is mostly intact. With Juventus getting Dusan Vlahovic and AC Milan on the verge of signing Divock Origi, the Nerrazzuri will need to beef up their attack now.