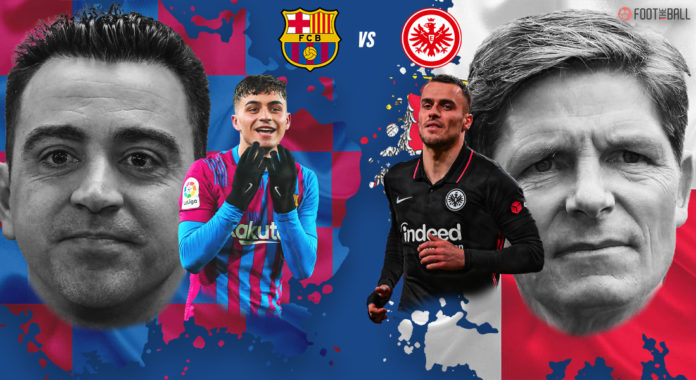 The business end of European competitions has well and truly begun. Barcelona are one of the favorites for the Europa League, however, Frankfurt have been impressive and can produce an upset.

Frankfurt are struggling to reach the heights of last season. They have drawn all three of their league games since qualifying for the last eight. Oliver Glasner is known for getting the best out of his players and will need to continue that. Frankfurt will start as underdogs in this tie but have quality players who can spring a surprise at home.

Filip Kostic has been their standout all-around threat while Rafael Santos Borre is having a fine debut season. Die Adler can continue to build on their success so far if they avoid defeat in the first leg or even win. Though their squad is not filled with too much star power, Glasner can certainly inspire his troops to the fullest.

The Blaugrana have completely turned around their fortunes under Xavi. They are up to second place in La Liga after a 1-0 win over Sevilla last weekend. Barcelona clobbered Napoli 5-3 on aggregate in the round-of-16. Moreover, they handled their business against Galatasaray in the last round, showing signs of composure and maturity.

Also read: Why Gavi can develop into a superstar with Barcelona and Spain

Xavi will be gunning for the only piece of silverware they can lift this season. Pedri has blossomed into one of the best midfielders while the new-look front three is on fire. The defence has been finally showing its worth with Ronald Araujo being the standout. They will need to be wary of getting too complacent against their German opposition.

Christopher Lenz is the only first-team player out with an injury. As usual, Glasner will rely a lot on Borre and Kostic.

Sergino Dest and Sergi Roberto will not be fit in time to feature in the first leg. Luuk de Jong is down with illness and his inclusion will be a late call. Ansu Fati is nearing his return.

Pierre-Emerick Aubameyang has already been a hit after an acrimonious departure from Arsenal. Seven goals and one assist from eight matches, including a record-setting El Clasico performance. Aubameyang is a supreme facilitator of attacks so it is no surprise that Xavi has given him free roam.

The Gabonese starts either on the left flank or through the middle before switching among these places for the rest of the match. This is particularly important against Frankfurt. If Aubameyang is on the right, the three-man defence will need to be alert in closing down.

The right-wingback has to do his defensive duties efficiently. Moreover, Aubameyang is versatile enough to use his trickery to bamboozle defenders and has a deadly long-range shot.

As mentioned above, Kostic is having a superb season with The Eagles. The Serbian has eight assists to go with his three strikes in the Bundesliga. Kostic is particularly influential when it comes to dangerous crossing and driving at the opposite fullback.

This is interesting given Barcelona’s current situation at right back. Dani Alves is ineligible so Araujo has to cover for him.

He is not a regular right-back so Kostic will be confident in his ability to get past. Moreover, Kostic has  a superb defensive work rate that can come in handy. Barcelona love breaking down the flanks so any player who adequately does the dirty work will be needed.

Though he cannot match up with the speed of Adama Traore, Kostic has been around long enough to be wary of tricksters with pace.

Barcelona should feel confident of their chances given the amount of talent in their squad, meanwhile, Frankfurt will have a good chance of progressing if they can defeat at home. FootTheBall predicts a 1-0 win for the Catalans.