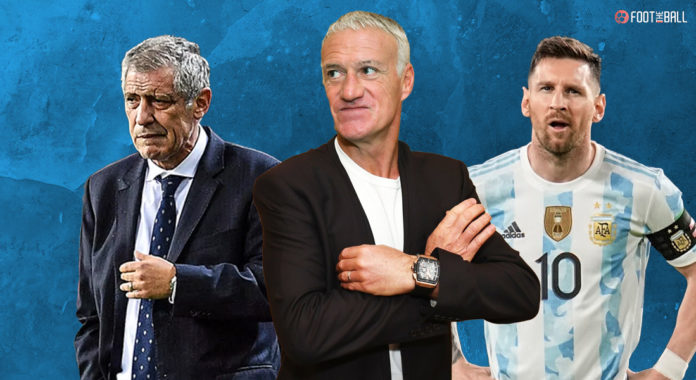 The road to FIFA World Cup Qatar 2022 has officially started. The draw in Doha threw up several interesting matchups across all the groups and of course, the unique mascot. The early predictions are that some of the favorites have gotten an easier path while others will have to work.

Though nothing is certain as of yet, it is clear that every heavyweight will have different challenges. The World Cup loves an upset and Qatar 2022 is shaping up to be a one-of-its-kind affair, in all aspects.

Nevertheless, the group stages have the look of being enthralling. However, not all nations may feel the same way. FootTheBall picks the winners and losers from the draw for FIFA World Cup Qatar 2022.

The number one ranked country in the world, Brazil enter the tournament in a rich vein of form. They topped CONMEBOL qualifying by a long distance and were one of the first teams to seal the ticket to Qatar 2022. Group G has two of the same opponents for them as last time in Switzerland and Serbia.

They drew with the Swiss before defeating the Serbs in 2018 to qualify for the knockouts. This year, the Selecao are even better as a team. They have several rising stars in Vinicius Jr., Antony, Richarlison, Lucas Paqueta, and Bruno Guimaraes amongst others. These players are marshaled by the likes of veterans in Thiago Silva, Neymar, Dani Alves, and a pair of world-class goalkeepers.

Indeed, Brazil have the strongest one-two as shot-stoppers in Alisson and Ederson. Tite’s side have a very good chance of progressing as group winners which might be important, given Group H has Portugal who can finish as winners themselves.

The Dutch have had a rough four years. Having gone through the shame of missing out in 2018, things were finally looking up at Euro 2020. They won all of their group games to instill hope but bowed out meekly to the Czech Republic in the round-of-16. Frank de Boer was sacked and in came Louis van Gaal, the hero of 2014 when the Netherlands finished third.

They secured direct qualification to the World Cup this time in Qatar 2022 with seven wins and two draws from 10 games. The Netherlands are growing a team with a healthy mix of young and old players.

Memphis Depay is the focal point of attack while Ryan Gravenberch and Jurrien Timber are establishing themselves as part of the future. Virgil van Dijk will need to rally his mostly inexperienced troops well but the hope is high.

A lot to be positive about after a good week working with the boys. We knew it would be 2 difficult games but we performed well. We look forward now! 🇳🇱 pic.twitter.com/K31mD1VYcx

Placed in Group A, the Dutch have to contend with debutants Qatar, Ecuador, and Senegal. The lone roadblock to topping the group should be the champions of Africa led by Van Dijk’s clubmate Sadio Mane. However, they should be aiming and getting nine points out of nine.

Euro 2020 took a final detour by going to Rome instead of coming home. The same cannot be said for the World Cup in Qatar with Italy having failed to qualify. That is win number one already sorted. The second win is seeing their opponents in Group B and already imagining winning all the games. For a change, this time, it does look possible.

Gareth Southgate gives us his thoughts on the @FIFAWorldCup draw…

Granted, things did not end well in 2010 when the USA were there like this time but it is a changed squad now. The Three Lions were semi-finalists in Russia in 2018 and have incredible depth in all positions.

Gareth Southgate’s familiarity with the team has helped them become one of the most stable sides in the world. England can expect wins against Iran and one against Wales/Scotland/Ukraine.

Raheem in his element. 👌

Wales might be the toughest proposition if they are to progress. The Americans have a youthful squad who lack experience and should not be too big an ask for England. Moreover, they can also expect a favorable tie in the round-of-16 if the Netherlands top that group as expected.

Lionel Messi is missing only one trophy from his incredible cabinet. Having led La Albiceleste to Copa America glory last year, Messi knows this is his final chance to win. Argentina are on a supreme undefeated streak in world football currently and have a great chance of going deep into the competition.

Saudi Arabia should not be a problem for Lionel Scaloni and co. but Poland will be a challenge. If Argentina can keep Robert Lewandowski quiet, it will help in a big way. Mexico have slipped from their old standard and are fallible in front of strong opposition.

Argentina are filled with superstars across all positions so competing will not be an issue. They need Messi to keep firing as he has done for so long. The national team always brings out a different side of him.

One of the groups was also going to feature two heavyweights, given Germany’s position in Pot 2. So, the other group members are going to have it rough. Japan is one of the unlucky parties, having to play against Spain and Germany. The Blue Samurai are one of the Asian powerhouses but beating either of the European giants will be a tall order.

🇯🇵 Japan join Group E as the third team! They have been drawn in position E4

Even a draw can help their cause which looks a little likelier. Takumi Minamino is the star and captain of the side but Japan will be looking for an upset. However, the odds are stacked heavily against them.

The hosts and debutants will have a baptism by fire in Group A. The Netherlands and Senegal are stacked with superstars and are dominant in their confederations. The opening match against Ecuador is a must-win affair if they are to keep alive their slim chances of qualifying. It will take an almighty collapse from the Dutch or the Lions of Teranaga if Qatar are to take points off of them.

The erstwhile number one team in the world. Belgium are running out of chance for their golden generation to win silverware. Unfortunately for them, they are up against another golden generation in the form of Canada in their first World Cup since 1986. If that was not bad enough, the third member of the group is Croatia.

The finalists in 2018 have had a few retirements but are still going extremely strong, led by Luka Modric. Even Morocco will be no pushovers, so Roberto Martinez will have to be very wary of his decisions. One wrong move and Belgium can crash out at the group-stage after finishing third four years ago.

The fourth-place finish in 2010 seems ages ago. Uruguay really struggled in the qualifying phase but that is expected in CONMEBOL. However, the scarier proposition is facing the same team from the quarter-final in South Africa. Ghana vs Uruguay has gone down in infamy due to Luis Suarez’s handball on the line to deny the Black Stars a goal.

They will be out for revenge, more so given Suarez is still playing. South Korea were one of the teams to watch in 2018 FIFA World Cup, when they defeated Germany 2-0 to dump out the champions. Then come Portugal and Cristiano Ronaldo’s single-minded focus to win the World Cup in Qatar. Uruguay will have to slog against every opponent in order to qualify from the group.