La Liga At The Business End 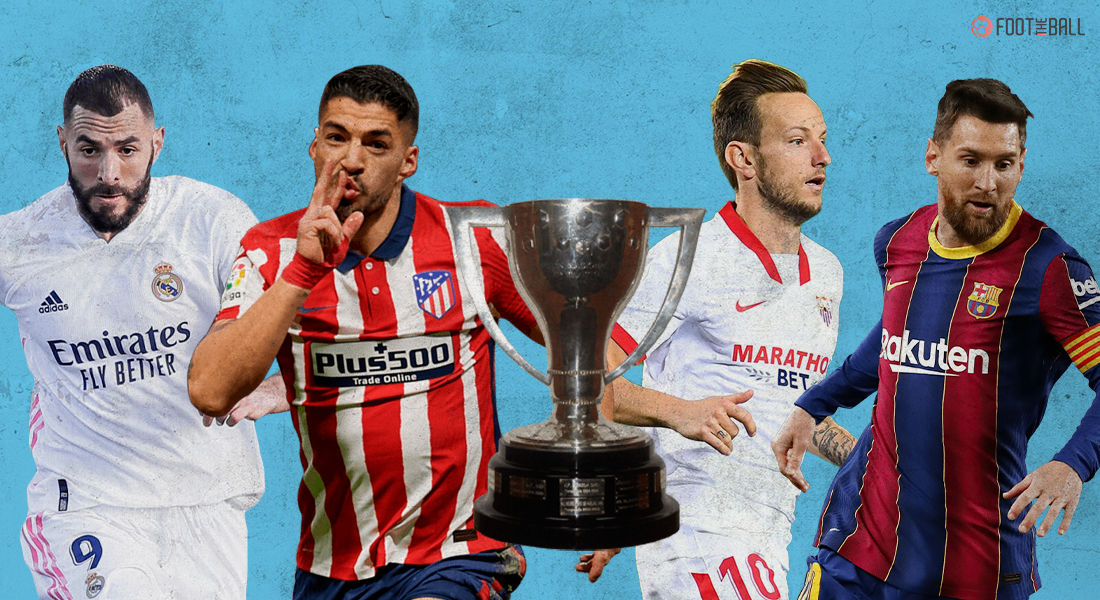 Well as the glorious Premier League was decided several weeks ago, it stands to reason that those one sided, farmers leagues around Europe would have been done and dusted by December right? But the La Liga title race is turning out to be the most enthralling in years.

Atletico Madrid remain at the top of the pile, with Real Madrid and Barcelona even with just two fewer points, followed closely by ‘underdogs’ Sevilla, just one point behind them.

It has been a topsy-turvy season with each team in the top four looking like contenders, run away victors and even completely out of the race at times. Each team is where they need to be at this juncture however, with next weekend a truly vital round of fixtures with Barça facing Atléti and Sevilla taking on Real.

With the league so finely poised, let’s take a look at each team involved in the highly exciting title race in La Liga.

Diego Simeone’s side were the feel good story of 2014’s La Liga when they stole the trophy on the last day of the season and remain the only team other than Real Madrid or Barcelona to win La Liga since 2003.

This season Atléti were cruising at the top of the table before a slump in their own form coupled by Real’s steady ability to pull results from nowhere and Barça’s resurgence saw their lead cut. Luis Suarez has been their talisman this season with 19 goals in the league making Barcelona’s decision to release him to a title rival completely baffling.

At times Atléti can be devastating but often appear slightly stodgy and stuck in an overly negative set up which has harmed them at times. Currently the lack of Luis Suarez means they are a much more potent team off the ball, with Angel Correa offering much more pressing across the front line with Yannick Carrasco and João  Félix at varying points.

Yannick’s last 5️⃣ games have been something else 📈 pic.twitter.com/EUyFOgwD0B

The problem with Suarez’s absence comes in front of goal where Correa is a much less lethal finisher, Carrasco struggles with decision making, and Félix is young and out of form. Marcos Llorente has been a revelation this season, adeptly playing a box to box role both through the centre and up and down the flanks, scoring 12 goals and providing 10 further assists.

Atléti face Barcelona at Camp Nou next weekend in a massive round of football, this fixture does not decide the title per se but goes a long way towards doing so.Surely the game between these two Spanish heavyweights will add more spice to the title race in La Liga.

The week after, Atléti welcome Real Sociedad to the Metropolitano, another tough fixture against a tired but solid Basque side (they lost 2-1 to Athletic Bilbao last week). To finish the season Diego Simeone will be facing tactical battles against Osasuna (Mid-table, on the beach, no telling which side will turn up) and relegation threatened Valladolid who may need a last day miracle to avoid the drop. What a narrative dream it could be if one side were to relegate the other whilst winning the title, or the complete inverse.

Real Madrid are having one of those seasons. By this I mean that they could look FAR from one of the best sides in two of Europe’s top competitions, and win both.

Zinedine Zidane of course deserves plenty of credit for getting his players through such a tough season with the results that he has, but numerous times this season, Real seem to have come through games with nothing but sheer ‘Real-ness’.

👔 Zidane: "It feels great. It was a hard-fought victory. We had many chances to score in the first half. When you go 45' with so many chances and without scoring it's easy to get frustrated or stressed. But we were patient and kept on playing. And the goal came in the end." pic.twitter.com/HCVJBMm9cG

They have looked down and out, only for a Karim Benzema goal to dig them firmly out of trouble. Before, they could pull through a lacklustre performance with a moment of Cristiano Ronaldo brilliance being the difference, and with him gone, it has been Frenchman Benzema’s time to shine.

Benzema has been out of this world this season, his performance against Chelsea being the latest commanding, leading performance on this season’s conveyor belt. He has been ably supported by other veterans such as the ageless Luka Modrić and Toni Kroos as well as Sergio Ramos who – whilst currently sidelined – has got through another title challenge with pure leadership and bravado.

It looks as though Real will be keeping Toni Kroos and Luka Modrić on ice, Winter Soldier style and using them when needed the most. The Champions League may prove too big-a-distraction ultimately but – and this is a tired cliche but – they just *sigh* know how to win!

Los Blancos have a tough run of fixtures ahead of them. Sevilla on Sunday night in a blockbuster weekend of action are the standout challenge, followed by Europa League chasing Granada.Bilbao have now beaten Atléti and Sevilla in the last week, do not rule out another title spanner in the works, finally Villareal will prove stern opponents depending on which side shows up.

Real can be reasonably expected to beat the final three but each presents a fairly enticing banana skin to navigate. The main thing in Real’s favour is that they have a strong advantage in the head-to-head matchups. They have beaten Barça twice, one draw and one victory over Atleti, and have already beaten Sevilla going into Sunday.

Barcelona have at various times this season looked flat, hapless, resurgent, imperious and then slightly shaky again. Throughout this season there has been turmoil behind the scenes, silly amounts of debt, silly amount of politics, silly notions that Lionel Messi may depart, it has all been rather silly.

Since the turn of the year, Messi has reminded us why he is the greatest to ever play the game, the defence has tightened a little, Frenkie de Jong has twisted and turned his way to beat presses more times than opposing strikers care to think and Antoine Griezmann has remembered that he is one of Europe’s best players. Not a bad set of factors to align.

A scrappy defeat to Granada last week before a thrilling second half saw them overcome Valencia (thanks to some more Messi nonsense) on Sunday evening.

With no Champions League to speak of for several months, a new president, and some pride for the game’s best player, all seem like fairly convincing factors pointing towards a Barcelona charge and a fairly soft last three games do little to dispel this.

After facing Atléti next weekend, Barça face Levante, Celta Vigo and Eibar. Levante are a fairly blunt mid table team, Celta Vigo are exciting but not exactly defensively sound (a bargain Barcelona then) and Eibar are another who may be fighting for survival come the final game. These games are all very winnable and fingers will be pointed if nine points are not forthcoming from the last three.

I mean, this is the one we want isn’t it? Sevilla have not won La Liga since 1946, are the clear underdogs here and (here’s the important one) are the only non super league team in the top 4.

Sevilla are also not just a sweet story, they are a very solid team who, whilst seemingly out of contention a couple of months ago, have snuck up on the classic top 3 to the point where they have to be considered seriously.

7 wins in their last 8 games had seen Sevilla race right back into the title charge and no-one can complain that they don’t belong there after beating Atletico Madrid as part of that run, including several Europa League hopefuls along the way.

The loss to Bilbao on Monday night will have been a huge blow, they could do with Bilbao dealing rivals Real Madrid a similar blow in the coming weeks. Julian Lopetegui has been utilising Ivan Rakitic smartly recently whilst French centre-back starlet Jules Koundé has been one of the players of the season alongside Swiss-Army-Knife Lucas Ocampos and Youssef En-Nesyri has emulated the impact of Wissam Ben-Yedder.

Sevilla have a similarly tough run-in to Real Madrid, facing the defending champions next Sunday, followed by Valencia, Villareal and Alavés. Valencia have had a poor season but can kick it with anyone on their day and Villareal are lethal when their high-risk-high-reward system pays off.

🗣️ Bono: ‘We will give our absolute all to finish higher than fourth.’#WeareSevilla #SevillaFCAthletic pic.twitter.com/2cUTbInNBo

So there we have it, four teams who have had totally contrasting seasons – on and off the field – all thoroughly in contention at the end of a bizarre but thrilling league campaign which has excited at every junction, does it have another twist in the tale? Will it be Simeone’s fighters? Will it be Real Madrid’s post-galacticos? Will it begin the new Barcelona era with a bang? Or will we now have to take Sevilla very seriously moving forward?

All we know is that whatever happens, here or in France, European football is alive and kicking

Michael Vince
Michael is an English fan of the beautiful game who supports Reading FC & follows Bilbao in Spain. A student of journalism based in England, Michael likes to delve deep into title races and his newly found love for La Liga.