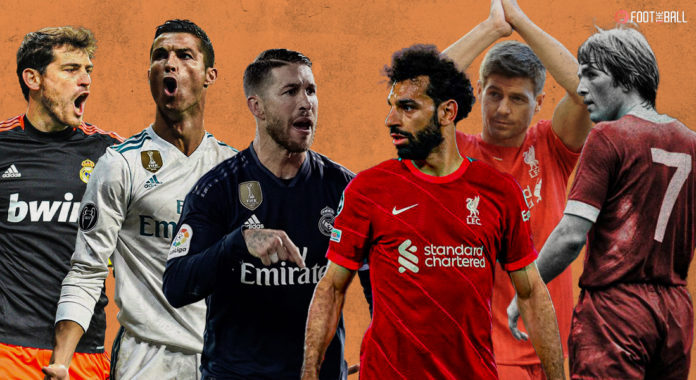 The 2022 UEFA Champions League final is nearly here with action getting underway on Saturday in Paris. It will be Real Madrid against Liverpool in a clash between two teams that know plenty about reaching the summit of European soccer.

They’ve met in the final twice before, and each has a victory in those matches, so this is the rubber match. Los Blancos have won the title a record 13 times, while Liverpool have six to their name, one behind AC Milan for second-most all time.

Carlo Ancelotti’s men have seen off Chelsea, Paris Saint-Germain and Manchester City to make it this far and are aiming to get their hands on a record-extending 14th continental crown in Paris. Meanwhile, Liverpool – seeking their seventh honour in Europe’s primary competition – have eliminated Inter Milan, Benfica and Villarreal to book their spot in the showpiece event.

Before the final begins FootTheBall look at their records, head-to-head and when they’ve met in the competition previously.

All of @LFC's six @ChampionsLeague triumphs have come under varying circumstances, making them the most successful British team 🇬🇧

So @LFC and @realmadrid meet again for the second time in three years.

Will things go differently or more of the same? 👀#Liverpool #RealMadrid #UCL https://t.co/KRkcN6iPWx

Liverpool and Real Madrid have met a total of eight times down the years in competitive action, with the Spanish side posting four wins compared to three for the Reds, and there has also been one stalemate between the sides.

Kicking things off with a bang, the maiden meeting between Liverpool and Real Madrid actually took place in Paris for the 1980-81 European Cup final, and the Reds lifted the trophy courtesy of Alan Kennedy’s strike in a 1-0 win.

It was an incredible run for English soccer where they won six straight titles, with the Reds getting three, Nottingham Forest winning two and Aston Villa winning one. Coincidentally, this match also took place in Paris, but it was at the Parc des Princes. It was all decided on an Alan Kennedy goal in the 82nd minute, as the Reds earned the narrow victory.

22 superstars on the pitch, only XI in the combined team. Who makes the cut and who misses out?

That 1981 final result kickstarted a run of three successive victories for Liverpool against Real Madrid, as the Merseyside outfit demolished their Spanish counterparts in the last-16 of the 2008-09 Champions League, an edition of the competition that was won by Barcelona.

Nearly 30 years would pass before they met again on the European stage, incredibly enough. The first leg in Madrid saw Yossi Benayoun score the game’s only goal before a thrashing in the second leg. Steven Gerrard scored twice, once from a penalty, Fernando Torres scored and even Andrea Dossena would get on the scoresheet for the prolific Reds. Liverpool then fell to Chelsea in the quarterfinals with that epic 4-4 second leg.

While @Benzema has been a star this season it is the support provided by @vinijr that has made them a @LaLiga ,and possibly a @ChampionsLeague winner🏆👀

Los Blancos would rip through the group stage with a perfect 6-0-0 record, including two wins over the Reds. The first was a 3-0 win on Matchday 3 at Anfield with Karim Benzema scoring twice and Cristiano Ronaldo also finding the net.

The second meeting, on the next matchday, saw Benzema once again score in a narrow 1-0 win. Real lost to Juventus in the semifinals, and Barcelona would go on to win the cup. Liverpool finished third in the group, with Swiss club Basel finishing second.

One of the most memorable finals of all time. This is the game where Sergio Ramos dislocated Mohamed Salah‘s shoulder with a crazy, unnecessary pull-down, and that wasn’t even the wildest thing to happen. Real won 3-1 as Gareth Bale scored a stunning bicycle kick, but this game is remembered by Loris Karius’ shocking performance in goal.

He tried to roll the ball to his defender with Benzema sticking a foot in resulting in a goal, and then he completely whiffed on a long-range shot from Bale, allowing what should have been a fairly routine save to end any chance of a comeback. On a brighter note, this is the game that surely tempted Liverpool to spend the big bucks on Alisson.

Their most recent meeting came in last season’s UCL quarterfinals. Real were still playing at the Alfredo Di Stefano while the Santiago Bernabeu underwent renovations. Real had a convincing 3-1 win in the first leg, with Vinicius scoring twice and Marcos Asensio getting the other.  That was enough as the two played out a 0-0 draw in the second leg. Real would lose to eventual champion Chelsea in the semifinals.

Liverpool could not turn the tie around behind closed doors at Anfield, meaning that the Reds meet Los Blancos now winless in six against them and scoring just twice in that time, but the travelling fans will hope to see the Merseyside menu come with a dish of revenge next time they meet.

Liverpool were by far the dominant side, but Thibaut Courtois was in top form. Salah came close several times, and Mane had the best chances. They were let down by some of their best creative hubs, including Alexander-Arnold and Luis Diaz.

It was not the prettiest of performances, but Real Madrid got the job done as so many times before. Ancelotti will be proud of how his boys managed the match and did the job. The record holders of the Champions League just added another to their collection, but with their ageing squad not many will expect them to fight for it again next season.