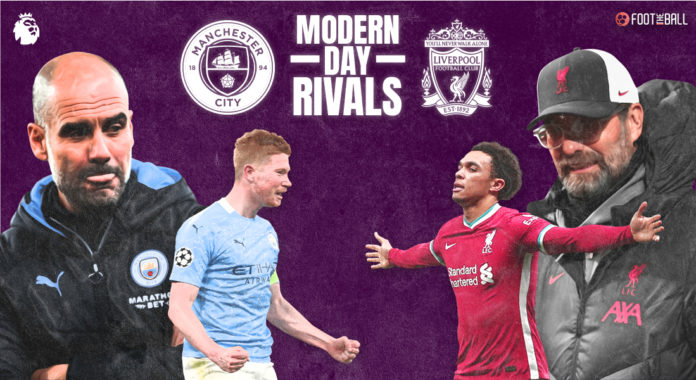 The star player of the Champions League week was, by a fair distance, Karim Benzema with his hat trick for Real Madrid against Chelsea. The Frenchman stole the spotlight but this round of matches showcased one thing that we all already knew – Manchester City and Liverpool are the two best teams in Europe, and by extension the world.

Liverpool were scintillating and professional, dispatching Benfica 3-1 in Lisbon while City were relentless, eking out a 1-0 win over the most Diego Simeone of Atletico Madrids. Provided they can repeat the trick next week in the second legs, and there is no reason to believe they can’t, both sides will be on track to contest for a treble (or for Liverpool, a quadruple) at the end of next month.

Pep Guardiola and Jurgen Klopp’s biggest obstacle in achieving the treble, and the plaudits that go with it, is each other. The two behemothic managers’ rivalry has enriched football for the last few years and on Sunday, they add another chapter to this story but this one is more pivotal than any other so far.

It is a favourite pastime of not only football but sports fans in general to debate and argue over things that are highly subjective and a consensus cannot be reached. Ex-Liverpool star Jamie Carragher ignited a similar clash of dialectical polemics by claiming that this Manchester City and Liverpool rivalry is the greatest ever in English history.

This @ManCity @LFC rivalry is the best we’ve ever had in English football!! We’ve never had the two best teams & managers in the world together fighting it out.

Personal preferences and supporter agendas will dictate whether you agree with it or not but one thing is undeniable – this rivalry is truly unique. Despite the intensity, there is little animosity between the two sides, and their tiffs with each other are puritan, contained to the patch of grasses at the Etihad and Anfield, and occasionally Wembley.

Only one point separates the two sides atop the Premier League table as they head into Sunday’s fixture. They face each other the weekend after in the FA Cup semi-final and they could potentially be the two Champions League finalists given that they are on opposite ends of the bracket.

A word from the boss ahead of this weekend's crucial clash! 🗣#ManCity pic.twitter.com/HklyaHnSEx

The Etihad tie thus has repercussions far beyond the usual bragging rights and superiority complex. This is a defining moment in the rivalry – akin to the four Clasicos in 18 days in 2011 at the height of the Pep-Mourinho feud. This is also perhaps the only time, other than their clash earlier in the season, when the two sides meet each other at their respective peaks.

Both teams feel like the final version of the managers’ development over the last few seasons and the winner will not only have an upper hand in the title race and a psychological advantage for ensuing fixtures, but in some ways would have triumphed in the ideological battle between the gegenpress of Klopp and the positional play of Pep.

For some, this may not be of prime importance. The lack of innate hatred between the sides and managers and the absence of a broader cultural context may make this rivalry seem more artificial and trivial. However, just the sporting contest has implications for the future of football.

It could define how tactics develop in the coming years, the length of the next contracts of Pep and Klopp, transfers in the summer, amongst other things. Or it could just be an entertaining game of football. Either way, football fans have a lot to look forward to in the coming weeks.