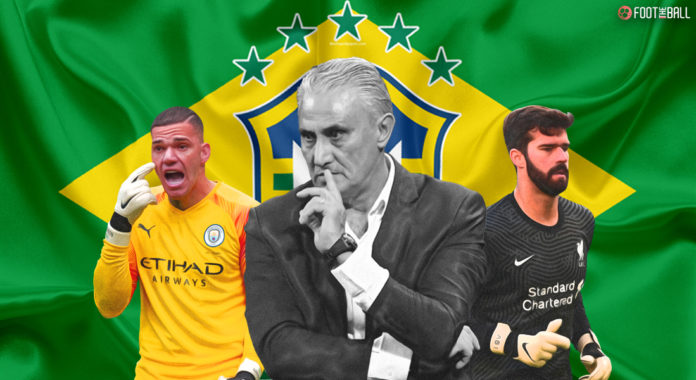 Manchester City vs Liverpool. First vs Second. Pep Guardiola vs Jurgen Klopp. The Premier League has witnessed this burgeoning rivalry for many years. However, there is one more South American flavor fight that is just as pivotal. Ederson and Alisson, are the two Brazilian numero unos at their respective clubs.

The two goalkeepers are among the best in their position. That’s what makes selecting one of them for Brazil at the FIFA World Cup Qatar 2022 a unique headache. Tite will have to base his decision on some extremely sophisticated data and performance in training. Moreover, it’s a wintertime World Cup, so even more things have to be kept in mind.

Also read: Who is Jamie Bynoe-Gittens, dubbed the ‘next Jadon Sancho?’

So, who does get the nod in goal for the Selecao? FootTheBall presents the case for each player based on history, performances over the years, and shot-stopping abilities.

This is no surprise. Ederson is coached by Guardiola who has an affinity for making all his players extremely adept on the ball. That includes the goalkeeper. It was the same case with Manuel Neuer at Bayern Munich, and now Ederson is one of City’s premier defensive passers.

194/867 attempted passes have been ‘high’ with an accuracy of 70%. Moreover, Ederson is comfortable with receiving the ball in pressure situations and plays his way out of them. Guardiola has trained him well to find the open man often and he can be a real asset in starting attacks from the back.

Ederson is brilliant when it comes to saving spot-kicks. He has a save % of 50 over the past year amongst goalkeepers across Europe. A lot has to do with Guardiola and the coaching stuff pouring over opponents’ footage.

However, in the situation of a match, the goalkeeper has to take the final decision based on what he feels.

Is Ederson the best goalkeeper in Europe? 🧤 pic.twitter.com/AlC4Ii1PYC

Ederson reads the taker’s movements and expressions in advance which allows him to make a calculated guess. He can be real handy if Brazil come against some quick players who are known to win penalties.

Adding to how well Ederson is with his feet, he is also trusted to carry the ball well. Ederson has covered almost 3000 yards in more than 600 carries in 2021-22. The most ingenious thing about it all has been that around 2000 of those yards have been progressive. That shows how much Ederson is trusted to advance the ball and join the defensive third during possession. That could be important for the national team if they are needed to attack quickly and launch long balls forward.

No place for crosses

Alisson is an expert when it comes to stopping balls into the box. His 1.91m frame means he can reach crosses easier than the attackers.

That has enabled Alisson to thwart 10.7% of all crosses per 90 over the past year. This places in the top 97th percentile of goalkeepers across European leagues, meaning opponents have little chance of scoring.

Alisson Becker has saved 84.2% of shots he’s faced this season – better than every single goalkeeper in Europe’s top 5 leagues.

Alisson commands his area well and is not afraid to charge out to grab the ball. Therefore, Jurgen Klopp relies on his goalkeeper heavily to bail the team out of trouble if they have issues at times.

Read here about the man who brought in Alisson and why his leaving could affect Liverpool.

Adding to how well he handles crosses, Alisson is also adept at handling stuff outside of his area. He can be found sweeping often and comes to the edge often to clear the danger away. Alisson takes 1.35 defensive actions per 90 in that regard so having in behind the backline is a bonus.

Given how high Liverpool’s defenders love to play, this can prove to be a real boon for Brazil. Moreover, Alisson also rushes off his line to intercept the danger and allows the defense to regroup.

Liverpool have great defenders. They have great attack-minded defenders. Liverpool even has an amazing second goalkeeper. That’s why they are often susceptible to players getting in behind. Alisson faces more shots than Ederson so it makes sense that he has more saves. He is has saved 76% of shots faced in 2021-22, and that number will touch 80% in no time.

Alisson is more acrobatic in his saves and has given several exemplary performances in making almost impossible stops. So, it makes sense to have a shot-stopper who can prevent goals regularly.

Tite has favored Alisson for the national stage in his tenure so far. over Ederson. While both players are excellent in what they do, there can only be one starter. It will be hard for either of them to miss out.

The World Cup is the pinnacle of football and every player wants to shine. Brazil are blessed to have such quality talent to stop their goals which was a big part of their successful Copa America 2019 triumph.

Meet La’eeb, the mascot for the World Cup like you have never seen before. Here’s why he is unique!

Can the Selecao go all the way this time in Qatar? Only time will tell, but one thing is for certain- Alisson and Ederson will be two very important pillars in that charge, no matter who starts the games.