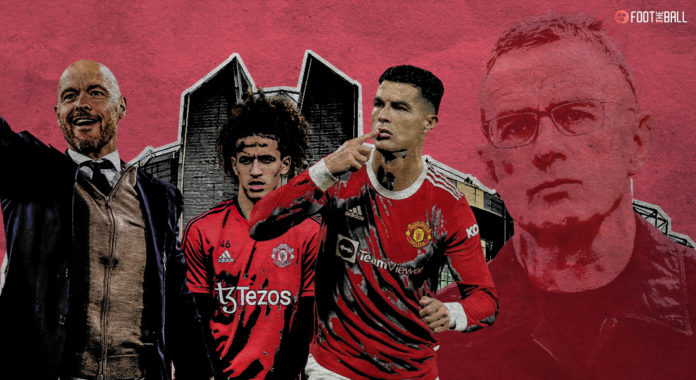 The end of the season cannot come quickly enough for Manchester United. A rudderless, misfunctioning team that can barely compete with their opponents every week. The Red Devils are having a torrid season and look set to all but miss out on Champions League qualification. Ralf Rangnick has tried to galvanize his troops with little effect.

Roy Keane "There was anger earlier in the season, now it's just sadness." pic.twitter.com/zhiNaku0tS

Erik ten Hag has been announced as the new first-team manager so big personnel changes are coming. However, United still have to play four more matches of the current season for the nightmare to end.

They are six points behind Arsenal, having played a game more. Making matters worse is their arch rivals doing so well. Manchester City are the league leaders. Liverpool are aiming for the quadruple. Both teams are in the semis of the Champions League.

United have little to play for and overhauling the two teams above them looks an insurmountable task. Ralf Rangnick has already conceded that top four is gone. Nevertheless, there are a few things that supporters can look forward to in this final stretch.

Phasing in the young guns

One area where there certainly can be uplift is if Manchester United give game time to its academy players. Several exciting teenage talents are waiting in the wings who have been performing superbly.

The two standout stars in the youth ranks are Hannibal Mejbri and Alejandro Garnacho. The former played the final few minutes at the Emirates while the latter has been involved with the first team.

Both Mejbri and Garnacho are players who will be involved more under Erik ten Hag. If they can get minutes in the final four matches, that will only enhance their stock and inject life into the team. Moreover, Mejbri could become the wildcard answer to the midfield woes.

Also read: Who is Kobbie Mainoo, the teenage midfielder dubbed the ‘next Pogba?’

Gary Neville on Hannibal Mejbri: "It takes a young kid to come on to show them how to sprint and put a challenge in. I'm actually proud of him." [Sky Sports] 👏

At least someone in that squad has the right mentality! #MUFC pic.twitter.com/deinp2Aqjt

Kobbie Mainoo, Toby Collyer, Alvaro Fernandes, Zidane Iqbal, and Charlie McNeill make up a solid group of players for the next generation. These are all players who will benefit from being in and around the senior set-up to further their growth.

The continued excellence of Cristiano Ronaldo

This is something that has never been in doubt. Cristiano Ronaldo has continued performing like he never left. 16 goals in the Premier League is the third-best tally behind Mo Salah and Son Heung-Min. The Portuguese legend has continued setting and breaking records which have been a key reason why United are somewhat surviving.

Without his output, it would have been nigh on impossible for the Red Devils to sustain a top-four push. Edinson Cavani has barely played all season while Marcus Rashford is horribly out of form. Therefore, it has been up to Ronaldo to shoulder the goal-scoring burden and bail his time out.

While there have been rumours Erik ten Hag does not want him, that is simply not a choice. Ronaldo has to stay for the next season and whoever comes as a striker will benefit massively under his tutelage.

The arrival of Erik ten Hag

Granted, it will not happen until after the campaign ends but the hope is already burning brightly. Supporters are desperate for the season to end right now so the Dutch manager can finally take over. Several underperforming stars are set to leave. Similarly, there are some big arrivals on the cards with Ten Hag wanting to revamp the squad.

It remains to be seen whether Ralf Rangnick continues in the consultancy role. The interim manager has been brutally honest and open in his assessment of the performances. To be fair, the last four games will mostly pass as a blur since the season is a foregone conclusion.

The upturn in some players

Though the season has been a train wreck, some players stood out. In attack, apart from Ronaldo, it was new signing of Jadon Sancho. He had a dry start to life at Old Trafford but quickly made up for a lost time. Sancho can truly flourish under Erik ten Hag and fans are excited for what next season has in store. David de Gea was another who continued to underline his importance.

22 – No goalkeeper made more saves than David De Gea during January in the big five European leagues, while according to Opta's xG On Target metric, he prevented more goals than any Premier League goalkeeper in this period (2.6). Inspired. pic.twitter.com/fwcbkFJbkX

He has the second-highest save percentage in the league, which goes on to show how poor the defence has been. De Gea has had several stellar performances, singlehandedly keeping the scoreline down. Fred has broken out as a goal-scoring midfielder from his old defensive setting.

The Brazilian wants to get on the ball and move it forward, providing another body in attack. These players have all shown they are deserving of their place in the lineup.

All of them will be needed to keep making the final push now.