Comeback is thy name 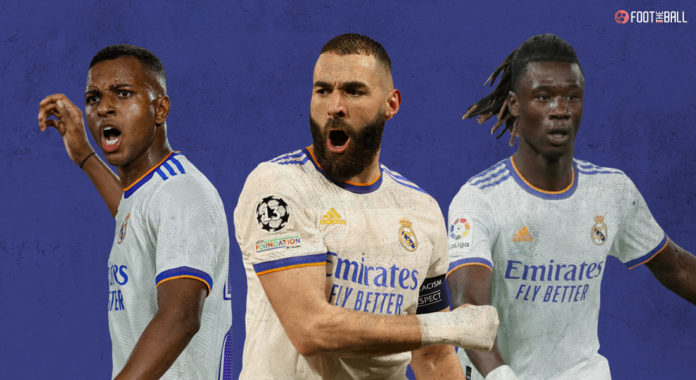 Real Madrid produced perhaps the greatest comeback of their already incredible Champions League journey to beat Manchester City to reach the final. Los Blancos produced a stunning performance to beat Pep Guardiola’s side  3-1 to book a place against Jurgen Klopp’s Liverpool. Riyad Mahrez opened the scoring  on the night as he produced a smart finish to beat Thibaut Courtois at his near post.

THIS IS REAL MADRID. pic.twitter.com/6TufybRd5O

However, Real Madrid, like so many times this season, produced a stunning comeback to score two goals in injury time to take the game into extra time. And they completed the turnaround in the extra time as Karim Benzema slotted the ball into the net from the penalty spot.

‘With a place in the final at stake, tensions were bound to be high. And it did not take long for a brawl to emerge. Casemiro gave away a free kick after a rash tackle on Kevin de Bruyne, for which he should have got a booking. Instead, however, it somehow led to another scuffle between Aymeric Laporte and Luka Modric, which resulted in both men getting booked.

The first 15 minutes did not produce much in terms of chances except for two half-chances for Karim Benzema.

Real Madrid’s counter-attacking style was getting them chances, but the final ball let them down in the early minutes.

Bernardo Silva had the first chance for Pe Guardiola’s side on the other end. Eder Militao lost possession to Phil Foden, and the ball finally landed for Silva, who produced a smart save from Thibaut Courtois. Gabriel Jesus came near minutes later as his shot whisked past the goal post.

Foden was the next to go near, but the goalkeeper parried his shot away.

Kyle Walker’s return was a massive boost for City as he kept Vinicius at arm’s length and ensured that his team did not bore the brunt of the Brazilian’s pace and skill.

Real Madrid did not register a single shot on target in the first half.

However, they started the next half in style. Modric produced a brilliant low cross which was flashed wide off the post from six yards by Vinicius, and he must have been relieved when the offside flag was raised, sparing his blushes.

City then went on the other end to create a chance of their own, but Courtois quickly smothered Gabriel Jesus’ tame shot.

Vinicius also improved his game leaps and bounds as he began to cause all sorts of problems for City on the left flank. And his work almost resulted in a goal for Los Blancos. Vinicius ran circles around City’s defence on the left before setting up a beautiful chance for Modric, whose shot was blocked. However, the move did not end there as Ederson ended up in no-man;s land as he came out to catch the ball but was saved by his defenders.

The constant pressure by Carlo Ancelotti’s men was making City players into unforced errors. Walker was mugged off the ball by Vinicius, who started a dangerous counter-attack smothered in the end by the City’s defence.

However, City came out of those blitzkriegs 20 minutes without conceding a goal. And then the goal game for them.

Ilkay Gundogan’s stunning pass split open Madrid’s defence as Bernardo Silva found acres of space to run into. But, instead of going for the goal, the Portuguese squared it for Riyad Mahrez, whose left foot secured City’s place in the final.

With the goal conceded, Real Madrid had to throw the kitchen sink and it ended up creating space for City’s attackers to exploit.

And Jack Grealish could have ended even the little hopes that Real Madrid had but his shot was cleared off the line by Militao. Grealish came again but Coutois used his foot to parry the ball away.

Yet it turned out to be one of the best transfer windows in recent years. #UCL pic.twitter.com/pA2y51A10C

With time running out Real Madrid did the unthinkable.Karim Benzemna crossed near the face of the goal for Rodrygo to score.

And a minute later a cross from Dan Carvajal took a flick from Marco Asensio and was headed past Ederson by the substitute.

Real Madrid kept up the pressure and were rewarded soon. Camavinga spotted Rodrygo who slotted a brilliant pass to put Benzema through on goal but Rubin Dias ill timed clip was enough for the referee to award the penalty, which was duly dispatched in the bottom right corner by the Frechman.

10 – Karim Benzema has scored 10 goals in the UEFA Champions League knockout stages this season, the joint-most by a player in a single campaign along with Cristiano Ronaldo in 2016-17, also for Real Madrid. Pantheon. pic.twitter.com/YCMA8jVtdU

With 17 minutes to go, Ream Ladrid kept their nerve and now have a date with Liverpool in Paris.

If Karim Benzema and Vinicius have been the main man for Madrid this season, it is super sub Rodrygo that he has become the star for the team in recent times. Real Madrid looked dead and buried but the Brazilian had other ideas as he scored two goals in injury time to just turn the tie on its head.

The Brazilian was also on hand to score the crucial goal against Chelsea in the quarter final.

While he may not be a regular starter for Real Madrid but performances like this will surely help him. He will be hoping for one more good show in Paris when Real Madrid take on Jurgen Klopp;s Liverpool.

The last time Liverpool and Real Madrid , Gareth Bale scored a stunning goal, Mohamed Salah got his shoulder injured by Sergio Rmoas and Loris Karius’ career got destroyed. Liverpool were left ruing a quality bench like Los Blancos. However, now it might be Ancelotti’s men that may feel jealous of Liverpool’s arsenal.

Ancelotti’s men have performed miracles but all those comeback had a second leg at Bernabeu which won’t be the case in the final.

And in Liverpool they will face the hungriest team who are chasing a quadruple. Whatever the result may be on May 29, it sure will be an epic.