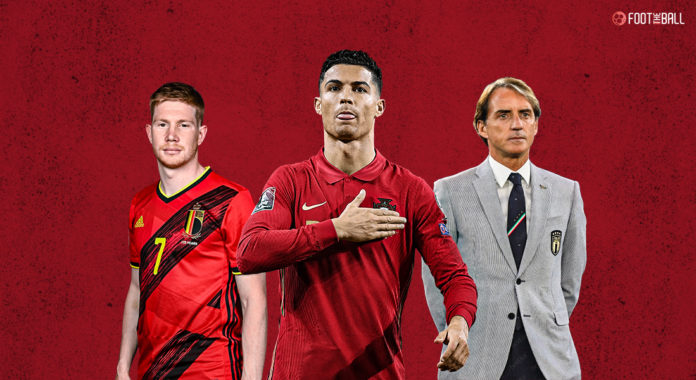 The new season of the UEFA Nations League has been inciting some mixed responses. UEFA and FIFA’s bid to make international matches more competitive and worthy has some people complaining looking forward to National league games. However, the Nations League has also met with criticism from one of its stars, Kevin De Bruyne. The Belgian maestro called the matches “glorified friendlies,” a feeling that has met varied responses.

"The Nations League is unimportant in my eyes. Just glorified friendlies after a long and tough season. I am not looking forward to it."

John Stones went the other way, heralding them as great chances to represent your country. On the other hand, Luka Modric and Jurgen Klopp have sided with De Bruyne’s path.

Indeed, the seasons are getting tougher and tougher for players. Nevertheless, calling the Nations League “friendlies” is a bit of a stretch. Just ask the English fans where England’s relegation to B-tier has seen another uproar about Southgate’s already trimmed prospects.

Nations league has produced some massive surprises, with the likes of Israel being promoted to A-tier and England being relegated. Therefore, there is merit to the whole concept of the Nations League, especially with the 2022 FIFA World Cup in Qatar approaching.

No such thing as friendly

For years, there had been questions regarding the whole idea of international friendlies. Of course, it is important to gel with the national teammates. However, the results had no bearing on a nation’s ranking.

Read also: How the quest for money took the Spanish Super Cup to Saudi Arabia

In other words, there was nothing to play for, the end objective was just bragging rights. Sports need something at the end of it. Therefore, the solution was to launch the UEFA Nations League, which would function with groups divided on the basis of rankings.

🗣 “We want to compete against the best in Europe.”

Wales boss Rob Page has praised the UEFA Nations League and how it has been good for his side. 🏴󠁧󠁢󠁷󠁬󠁳󠁿 pic.twitter.com/vhmWRX5Ts4

The tournament was a major success when it began in 2018, with much fanfare and competitive gameplay. Portugal clinched their second international trophy in 2019. UEFA revamped the format after the first iteration, including more teams in the top-tier groups.

There is also talk of including CONMEBOL nations from 2024, with the bond between the two nations strong now as evidenced by the Finalissima. With so many nice initiatives and good projects lined up in the future, why are some players still not on board?

No rest in between

The main issue for players is not about the validity or impact of matches. It is that there are these obligated matches at all, especially between a gruelling club season with a winter World Cup in sights. Player welfare is certainly not high up the ladder for the governing bodies. This was evident again with UEFA expanding the Champions League format from 2024.

The new format of the UEFA Champions League. It will be effective from the 2024-25 season. pic.twitter.com/yBxhbliPPO

The fact that there are three games in almost 7 days in an international break means that the players have a point being aggrieved.

The demands of league football have seen more injuries and players playing through the pain barrier often. Klopp has been the number one critic of fixture scheduling, venting his grievances all throughout the season.

"The Nations League is of the most ridiculous ideas I ever heard." 🔴 pic.twitter.com/4spmL3z1SZ

He was one of the main proponents to call for the reinstatement of the five-subs rule. Moreover, Klopp engaged in a public feud with Sean Dyche over this issue with the Premier League keeping the three-subs rule.

Nevertheless, De Bruyne’s comments are a timely reminder that even though football is important, it is the players who make up the game that matter more.

It must have been sobering for England to become the only team alongside San Marino in failing to score a goal from open play in Nations League.

The Nations League gives opportunities for all teams to upset the apple cart. The balancing act is key in terms of football as days go on. Of course, matches are important for the public and money.

🤬 𝗠𝗞: “Simon laughs and that is ridicule! Former players ask me ‘What is it with that man?’ Show some respect!”

🔥 𝗦𝗝: “If you listen to players that played for me, you’ll know I’m fair!”

Martin Keown and Simon Jordan get into a 𝙝𝙚𝙖𝙩𝙚𝙙 debate over player welfare 👀🍿 pic.twitter.com/24gweOZ2HR

However, the welfare aspect cannot be overlooked at all. Therefore, the stakeholders have to come to terms with a solution(s) that soothes all parties.

One thing is for sure, the Nations League is not a glorified friendly tournament.