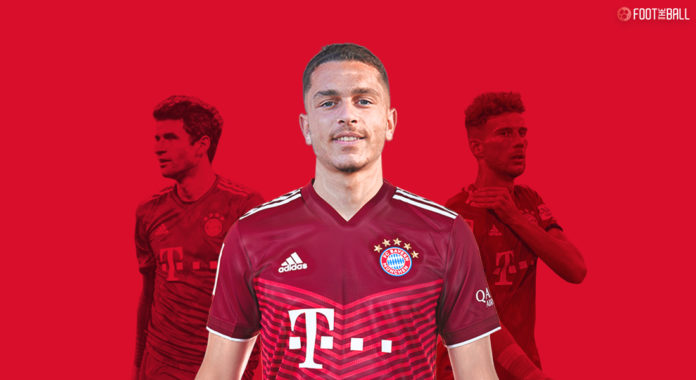 Bayern Munich are infamous for poaching young talent from the rest of the German football ecosystem but their transfer activity often overshadows the quality of their own academy. The likes of Thomas Muller, Phillip Lahm, Bastian Schweinsteiger, David Alaba and Mats Hummels have all come through Saebener Strasse and the newer graduates include Jamal Musiala and Joshua Zirzkee.

Defenders have been terrorised by the Ibrahimovic name over the past two decades and if they thought that Zlatan retiring would mean the end of that legacy, they have a wicked surprise in store. From Bayern’s new state-of-the-art academy comes Arijon Ibrahimovic, a player who may not only emulate his namesake but has the potential to surpass him.

A right-footed attacking midfielder, Arijon Ibrahimovic is arguably the highest rated player in Bayern’s academy currently. The 16-year old has his roots in Kosovo but has been involved with the German youth set-up and could represent either country still at senior level.

Ibrahimovic began his formal training at Greuther Furth before moving to Nuremberg, his home town club. He was signed by Bayern in 2018 and he has not looked back since.

Still well in his teen years, Ibrahimovic has already established himself as one of the most promising talents in Germany. He has trained with the senior team multiple times and also was on the bench for Bayern’s defeat to Borussia Monchengladbach in January as the senior team struggled with an injury and covid crisis.

A Bayern München bench for a Bundesliga game made up entirely of reserve and underage team players, with a couple of teenagers in the line-up too. Nemanja Motika (2003) has had a strong season in the B team and Arijon Ibrahimović (2005) is a very exciting prospect. https://t.co/qtpG34puoE

The youngster has 10 caps for the German U17 team and has scored 8 goals for them, making good use of the opportunities given. Ibrahimovic has been billed to be a natural heir to the likes of Leon Goretzka and Thomas Muller.

Skills and Style of Play

Arijon’s greatest strength is perhaps his versatility. He has played in midfield and across the attacking line behind the striker for Bayern’s U19 side this season. His best position seems to be an attacking 8 or number 10 role, where he has the freedom to pull the strings and create openings.

Ibrahimovic’s dribbling has often been highlighted as his best technical aspect. His graceful movements with the ball evoke memories of Mesut Ozil and his ability to navigate tight spaces using this skill is invaluable.

The youngster also has an exceptional eye for goal, which has seen him be pushed into more attacking and central roles over his short career so far. He has a strong right-foot and always manages to drift into or create space for taking shots. Combined with his ability to link attacks, Ibrahimovic seems like a natural heir to Thomas Muller in the hole behind the striker.

Ibrahimovic’s goal involvement, for someone who is not an out and out striker, is astonishing. He has 11 goals and 17 assists in 34 appearances for Bayern’s U17 and U19 teams in the junior Bundesliga, UEFA Youth League and DFB Pokal Youth cup. That gives him 0.51 goals scored per 90 minutes, which is surprisingly still less than his xG of 0.56 per 90 (as per Wyscout data).

He also has good underlying numbers, attempting 4.45 dribbles per 90 with over half of them successful and taking 4.03 shots with 38% of them on target. In modern football, there is little space for slacking and Ibrahimovic’s defensive numbers are also impressive – he makes nearly 3 interceptions and over 4 recoveries per 90.

Arijon’s passing numbers are also decent but he is more of a carrier and receiver than an initiator. He may be looking to add that weapon to his armoury as he progresses in his career.

Arijon Ibrahimovic already has a lot of eyeballs on him but his immediate future looks set to be at the Allianz Arena. Last year, he signed a new contract with the German champions that would keep him at the club until 2024. It is also clear that manager Julian Naglesmann sees him as a future asset given his involvement with the senior team already.

He turned 16 just a few months ago but many believe that he is ready for a step up to senior football. However, Bayern should be looking to give him experience out on loan next season or with their second team (usually U23) instead of throwing him off the deep end into their own first team.

Clubs from Germany & abroad, including Salzburg, are interested in Arijon Ibrahimović. The 16-yo is determined to establish himself at Bayern in the long term. For now, the club wants Ibrahimović to develop in the U19s with a view to integrating FCB II next season [@kerry_hau] pic.twitter.com/w2MKap3xDi

Ibrahimovic also has a decision regarding his national team to make. It may be sooner than one thinks, especially if he keeps up his current rate of progression. Bayern have a somewhat ageing squad with the likes of Muller, Lewandowski, and Neuer approaching the twilight of their careers. However, they also have a lot of established young talent in Davies, Upamecano, and Musiala. Arijon Ibrahimovic could be the next to join this group and he may just be the pick of the lot.